Going big: heavy ligands unlock the study of some of the rarest and most toxic elements on Earth

Rare sighting: the glowing crystal shown in the background is made of one of the very few compounds of curium (Z = 96) that have been isolated and characterized since the discovery of this element in 1944. A newly proposed approach facilitates the study of rare, toxic, and/or precious isotopes.
Gauthier Deblonde
Scientist, Lawrence Livermore National Laboratory
Follow
Like Liked by Victoria Richards and 2 others
0

Polyoxometalates as ligands to synthesize, isolate and characterize compounds of rare isotopes on the microgram scale - Nature Chemistry

The study of rare isotopes is hampered by their scarcity, cost and sometimes toxicity. Now polyoxometalate ligands have been shown to facilitate the capture of f-block elements and their characterization. Single-crystal X-ray diffraction structures have been obtained for several molecular complexes,…

The synthesis and study of radioactive compounds are inherently difficult due to the toxicity of the materials involved, but also because of the cost and scarcity of research isotopes. Traditional synthetic methods and chemical studies focus on small inorganic or organic complexes and typically require several milligrams of sample — per attempt. Milligram quantities may not sound like a lot, but for some isotopes this is equivalent to the world’s yearly supply! Some radioisotopes are also too costly, too short-lived, or too toxic to be studied with current methods.

In a new study, published in Nature Chemistry, our team demonstrates that, by leveraging fundamental chemical properties, such as molecular weight and solubility, it is possible to synthesize coordination compounds of rare/toxic/radioactive/precious elements and characterize them in great detail, while using very tiny amounts, down to the microgram scale.

Our proposed method uses "HEAVY POLYOXOMETALATE LIGANDS" (POMs) and enables the facile formation, crystallization, handling, and detailed spectroscopic and structural characterization of complexes containing rare isotopes starting from just 1-10 micrograms. Several new single crystal XRD structures were obtained, including three new compounds of curium (element 96). For context, curium isotopes are not only radiotoxic, but they are also rare and extremely expensive – to a point where just 10 curium complexes had been isolated and characterized by single crystal X-ray diffraction since the discovery of this element in 1944. The newly proposed method significantly decreases the radiation exposure to the workers, preserves isotope resources, and drastically cuts costs. The newly proposed POM-based approach could be used to discover and study many new compounds containing rare isotopes, such as actinides and radiolanthanides, hence allowing scientists to unravel bonding trends (and perhaps isotopic trends) in the periodic table. Furthermore the POM-based approach also offers a viable path to isolate and study coordination compounds of elements that have remained out of reach with previous methods, such as actinium, transcalifornium elements, and more.

The study also revealed that the POM ligands have very interesting properties compared to classic ligands. For example, our team at Lawrence Livermore National Laboratory, with collaborators from Oregon State University, realized that most POM ligands render curium (i.e., Cm3+ ions) highly luminescent, offering a potential way for detecting it even at very low concentrations. The various curium-POM complexes tested exhibit strong fluorescence emission, in both the solid-state and solution-state (Figure A). The POM ligands also form highly luminescent complexes with many other f-elements such as europium, terbium, dysprosium, and samarium, affording a convenient way to study their chemistry. POM complexes with americium (another radioactive element from the actinide series) were also studied. Given the intrinsic properties of the POM complexes, the team was able to use a variety of spectroscopic techniques  (including small molecule single crystal XRD, Raman microscopy, NMR spectroscopy, UV-vis-NIR absorbance and fluorescence) affording an unprecedented perspective on the chemistry of these rare elements. The study presents the first characterization of curium-POM compounds; three of them (in fact, curium is the heaviest element ever isolated with a POM ligand). The study also yielded the first experimental determination of the ionic radius of the eight-coordinated Cm3+ ion.

The team continues to apply the new POM-based approach to unlock the study of many novel actinide compounds and rare isotope materials, with already multiple additional successes in the pipeline. Stay tuned! 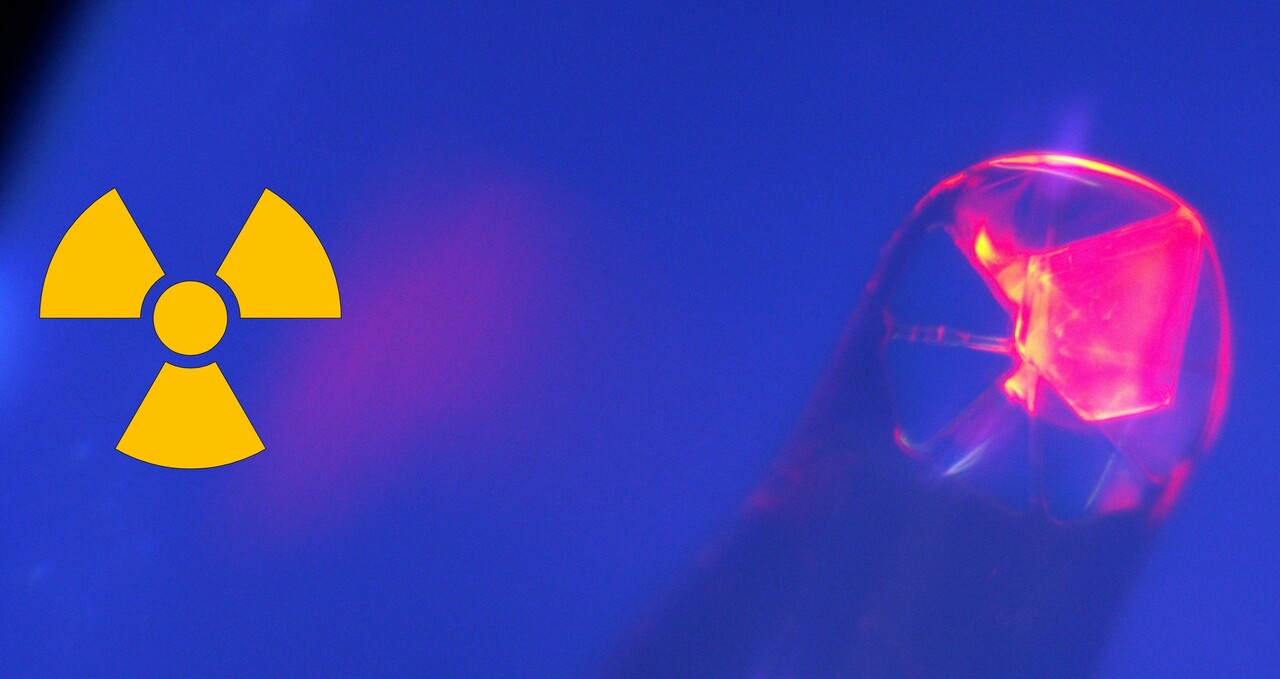 Going big: heavy ligands unlock the study of some of the rarest and most toxic elements on Earth

Rare sighting: the glowing crystal shown in the background is made of one of the very few compounds of curium (Z = 96) that have been isolated and characterized since the discovery of this element in 1944. A newly proposed approach facilitates the study of rare, toxic, and/or precious isotopes.