Conformation is found to govern the intrinsic stability of emitters and the operational lifetime of organic light-emitting devices.
Youngmin You
Professor, Ewha Womans University
Follow
Like

Organic molecules that exhibit thermally activated delayed fluorescence allow for high efficiencies in OLEDs, but their operational stability remains a challenge to their commercialization. Here the molecular factors that govern the stability of various dyads based on a cycloamino donor–acceptor pla…

It is very fortunate for me to have two display giants in Korea. Whenever I talk with the people in the companies, I am asked to provide any idea of improving the operational stability of displays. This is particularly the case of organic light-emitting devices (OLEDs). The most challenging (and important) task in commercializing OLEDs is to improve operational durability. Actually, the OLED industry has witnessed continued failures of putting blue-phosphorescent molecules into OLEDs due to their very short operational lifetime.

Device lifetime is governed by a variety of factors; one of the key factors is the intrinsic stability of organic materials. The discovery of thermally activated delayed fluorescence (TADF) emitters for OLEDs has sparked enormous attention, because TADF materials produce high efficiencies. The rosy prospect may also be offered by the hope that the materials may provide an unexplored strategy to address the stability issue.

My group initiated a collaborative research with a Korean company to identify the molecular factors that govern the intrinsic stability of emitting materials for OLEDs.[1] We wanted to perform our research with archetypal TADF compounds that were established by Adachi and co-workers.[2] Molecular construct of the tested TADF molecules was based on a donor-acceptor dyad. A variety of cycloamino donors were employed to examine the influence of stability of molecular parameters of these molecules, particularly their structural, electrochemical, and excited-state properties.

Our high performance liquid chromatographic analyses revealed that the excitonic degradation of these molecules involves scission of the C-N bond that tethers the cycloamino donor. The rates and photochemical quantum yields of this degradation vary by over three orders of magnitude. The kinetic degradation parameters were positively correlated with the operation lifetimes of the devices containing the molecules, which demonstrated that the intrinsic stability of the materials is crucial to device longevity. Interestingly, material and device stabilities show poor correlations with the energy and lifetime of the fluorescent state of the compounds.

Our structural and spectroscopic experiments and quantum chemical calculations showed that their stability was governed by the conformeric heterogeneity between the pseudo-axial and pseudo-equatorial forms of the cycloamino donor. Spontaneous bond dissociation occurred in the former (i.e., the pseudo-axial form), but the irreversible degradation was disfavored in the latter (i.e., pseudo-equatorial form). The validity of this finding was supported by the linear relationship between conformeric abundance and device lifetime. This research has been published in Communications Chemistry. We hope that our research will provide valuable insights into the design of stable TADF molecules. 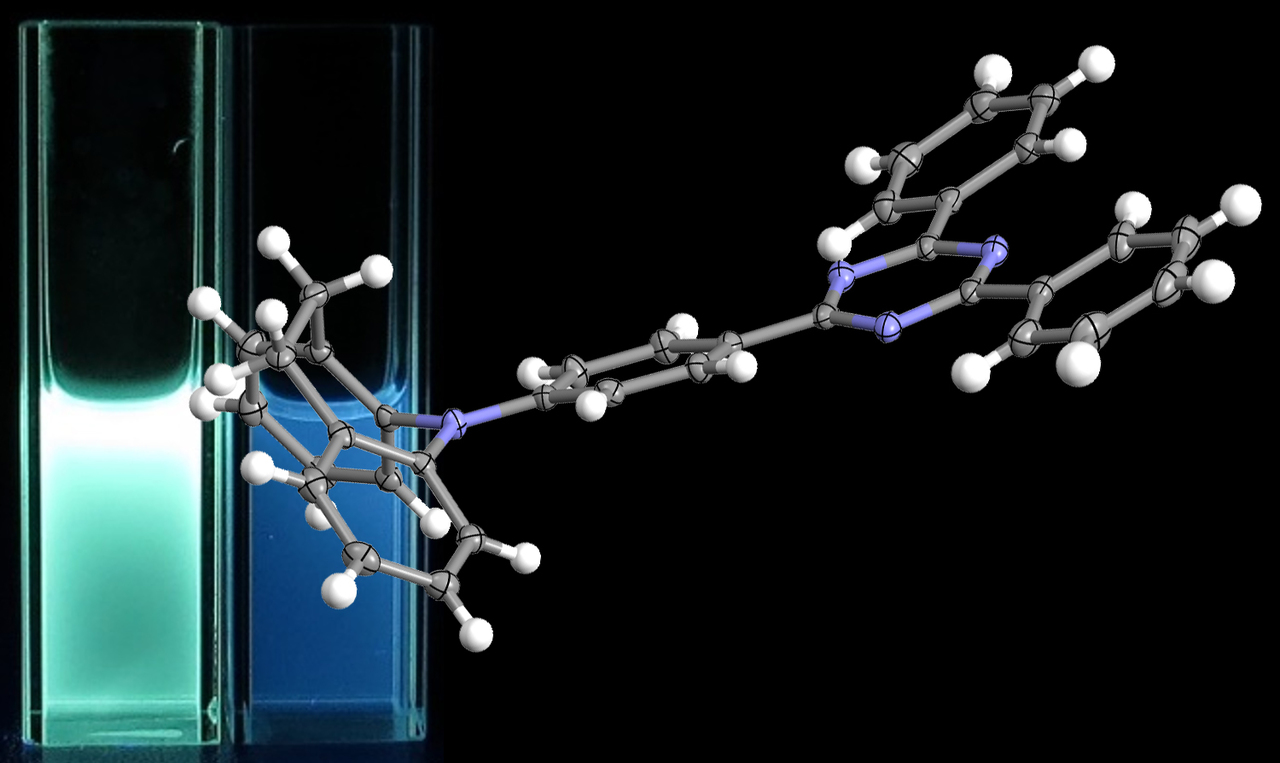 Conformation is found to govern the intrinsic stability of emitters and the operational lifetime of organic light-emitting devices.