Degradation of heterogeneous catalysts limits their cost efficiency and sustainability. Here a hydrogenation catalyst that is stable over a hundred cycles of reuse is reported, with stability attributed to the formation of an agglomeration at the palladium/silicon interface.

Hydrogenation reaction is of great importance in catalytic science and chemical industry. An efficient reusable and active heterogeneous catalyst for hydrogenation is still in demand. The development of metal immobilization on solid supports is important and challenging. To date, no extremely highly stable and reusable catalysts for efficient hydrogenation have been reported.

We have developed metal hybrid catalysts by agglomeration of metal nanoparticles with silicon nanowire array having a macroscopic and nanoscopic reaction spaces (Figure 1).1,2 Prepared silicon nanowire array-supported palladium nanoparticle catalyst (SiNA-Pd) was applied to the palladium catalyzed Mizoroki-Heck reaction, hydrogenolysis of nitrobenzene, and hydrosilylation of an a,b-unsaturated ketone as well as C-H bond functionalization reactions of thiophenes and indoles.  The catalytic activity reached 490 mol ppb Pd with a TON of 2,000,000 and the catalyst was reused nine times without significant loss of catalytic activity in the Mizoroki-Heck reaction.

We envisioned that SiNA-Pd, agglomerated with palladium nanoparticles and silicon nanowire array, is a robust and efficient catalyst for hydrogenation. Here, we report the hydrogenation of alkenes using SiNA-Pd (Figure 2). SiNA-Pd mediates the hydrogenation of various alkenes and alkynes including tetra-substituted alkenes to afford the corresponding alkanes as well as to produce margarine in food chemistry. Moreover, when SiNA-Pd (0.12 mol% Pd) is catalyzed for hydrogenation of trans-stilbene under H2 atmosphere (0.1 MPa), diphenylethane is given in 99% yield. SiNA-Pd is readily recovered and reused over 150 times without significant loss of its catalytic activity (Figure 2). In contrast, Pd/C, a commonly used heterogeneous catalyst, is reused with significant loss of catalytic activity (1st use: 99%, 20th use: 59%).

Figure 2. (a) SEM image of prepared SiNA-Pd. (b) Hydrogenation of trans-stilbene with SiNA-Pd and Pd/C

Structural investigation reveals that palladium nanoparticles are metallically gradated onto the silicon nanowire array under mild conditions by agglomeration of palladium silicide, as confirmed by XAFS, IR and XPS together with argon-ion sputtering. The silicon support serves as a reducing agent and the electrons are provided through the palladium silicide layer to the outermost surface of PdNPs at which the reduction of Pd(II) to Pd(0) occurs. Overall, the immobilization of palladium onto silicon is so robust and stable that the catalyst is reusable more than one hundred times without loss of catalytic activity. Eventually, palladium nanoparticles are strongly supported on SiNA to provide robust heterogeneous palladium catalyst. This new metal agglomeration immobilization may be applicable to the preparation of a variety of metal nanoparticle catalysts. The details of this work can be found here: “Metallically Gradated Silicon Nanowire and Palladium Nanoparticle Composites as Robust Hydrogenation Catalysts” in Communication Chemistry. 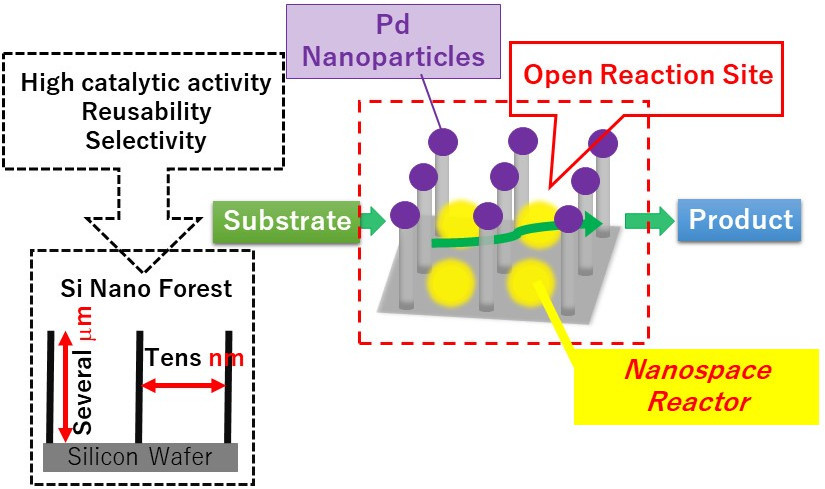 Silicon Nanowire Array-stabilized Pd nanoparticles, SiNA-Pd is readily recovered and reused over 150 times without significant loss of its catalytic activity for hydrogenation of alkenes.