How yeast cells reprogram metabolism to adapt to growth on a non-natural carbon source?

Yeast cells have evolved complex regulatory networks to facilitate the use of the natural carbon sources through reprogramming cellular bioprocesses. Here we attempt to address an important open question, that is how cells reprogram their metabolism to response and adapt to growth on a non-natural carbon source, such as xylose.

After millions of years of evolution, Saccharomyces cerevisiae integrates multiple metabolic routes to facilitate the use of different carbon sources (Nielsen and Keasling, 2016). Furthermore, the evolved complex regulatory networks allow yeast cells to reprogram cellular metabolism when carbon source switches from glucose to non-preferred carbon sources. The studies of how such metabolic switches are regulated are paradigms of molecular biology, e.g., the GAL-regulon and the glucose-ethanol diauxic shift. However, understanding of how yeast cells reprogram their metabolism to catabolize a non-natural carbon source is limited due to the incomplete knowledge of cellular response mechanisms. In our recently published paper entitled ‘Metabolic network remodelling enhances yeast’s fitness on xylose using aerobic glycolysis’, we combined metabolic engineering, systems biology and adaptive laboratory evolution (ALE) approaches to gain insights into how yeast can perform a global rewiring of cellular processes to efficiently accompany carbon sources transitions (Li et al., 2021).

In this work, we use xylose, the most abundant pentose in nature, as a representation to gain insight into the cellular reprogramming mechanisms when switching from growth on glucose to xylose. As xylose is a major constituent of lignocellulosic biomass, better understanding of xylose metabolism in yeast is also of biotechnological relevance (Li et al., 2019).

To construct an optimized xylose strain, we first evaluated four components of the xylose assimilation module, which consists of xylose transport, isomerization of xylose to xylulose, phosphorylation by xylulose kinase, and carbon rearrangements through the pentose phosphate pathway (PPP) (Figure 1A). Out of these four catalyzing units, xylose isomerase was proved as the engine of xylose metabolism. During the glucose-to-xylose shift, we noticed that cells went through an extremely long lag phase (Figure 1A), indicating that yeast cells might need a long lag phase to reprogram cellular metabolism in response to xylose catabolism. To shorten the lag phase, we performed a thorough benchmark comparison of six previously identified targets, including GRE3, ASK10, PHO13, ISU1, HOG1, and IRA2. Through this approach, we shortened the lag phase to 15 hours and improved the growth rate to 0.26h−1.

Through metabolic engineering, although we substantially shortened the lag phase and improved the growth rate, the complete landscape of the xylose response is not clear. We therefore performed transcriptome analysis to identify the cellular reprograming mechanisms underlying the enhanced adaptability on xylose. The transcription profiling showed that the engineered strains are able to remodel cellular metabolism for xylose catabolism, such as improving amino acids (AAs) biosynthesis and reducing aldehyde metabolism (Figure 1B). Moreover, we found that the native network could also be rewired to improve xylose adaptation, such as reduced ribosome biogenesis, blocked mitogen-activated protein kinase (MAPK) signaling pathway and controlled respiratory activity (Figure 1B).

To understand whether yeast cells have the native adaptive mechanism on xylose and how cellular processes affect cellular fitness during growth on xylose, metabolic engineering combining with ALE were performed. ALE was executed by starting with cell growth in a xylose medium and subsequent switch between glucose medium and xylose medium, in order to select for strains which were able to rapidly switch cellular metabolism between these two carbon sources. After more than 300 generations, we obtained some isolates that showed improved growth rates more than threefold on xylose compared with the parental strain. Through reverse engineering we revealed that the levels of glycerol-3-P and xylitol were important in regulating xylose metabolism (Figure 1C). Afterwards we could remodel the native metabolic network towards xylose catabolism through incorporating all the learnings in one strain and shortened the lag phase to about 11 hours. Importantly, the genomic integration of the whole xylose assimilation module in this strain ensures its genetic stability which is of key importance for industrial application.

Combining the findings from the ALE experiments and transcriptome analysis, we noticed that enhancing the respiratory intensity, weakening gluconeogenesis activity, and increasing the glycolytic flux are beneficial for cellular adaptation on xylose (Figure 1). We therefore propose an aerobic glycolysis model for xylose adaptive metabolism in yeast. Interestingly, this metabolic model is similar to the classic Warburg effect in cancer cells (also known as aerobic glycolysis), in which an enhanced glycolysis and respiratory activity are required. Notably, mutations in the subunits of SWI/SNF complex happen in both metabolic models. Therefore, another question raised here is that whether the mutated SWI/SNF complex is linked to the aerobic glycolysis model? If so, how it happens? The further studies correlative to this question are going on in Jens’s lab.

In conclusion, our study generated insights into how yeast cells respond and adapt to grow on a non-natural carbon source, and we used this information to engineer yeast to have improved cell growth on xylose by 3.6-fold compared to the parent strain. Due to the high respiratory metabolism in mitochondria and low ethanol production under the aerobic glycolysis metabolic model, our engineered xylose strains could be exploited as a cell platform to produce high-value added biochemicals from xylose, such as citrate, L-glutamate, succinate, itaconic acid, and 1,4-butanediol or acetyl-CoA derived fatty acids or terpenoids. We believe this work offers new insights for understanding how cellular metabolism adapts during a carbon source switch from glucose to xylose and provides a new angle of view for future studies of how cells can adapt to growth on other non-natural carbon sources.

For more information, please read our article in Nature Catalysis via 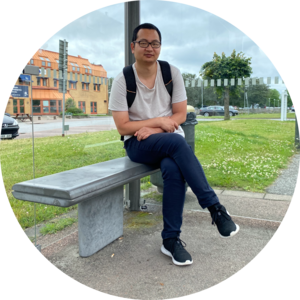