The origin of the great kinetic pH effect in hydrogen electrocatalysis remains far from having a consensus. Here, we propose that it is the significantly different connectivity of hydrogen-bond networks in the electric double layers that is responsible for this.
Peng Li
Postdoctoral Researcher, Wuhan University
Follow
Like Liked by Evelina Satkevic and 2 others
0

The hydrogen evolution and oxidation reactions on Pt electrocatalysts exhibit much more favourable kinetics in acidic than in alkaline electrolytes. Now, by combining theoretical simulations and spectroscopic measurements, it is demonstrated that the different connectivity of hydrogen-bond networks…

The hydrogen evolution reaction (HER) and hydrogen oxidation reaction (HOR) are the cornerstones of the hydrogen economy. Besides their technological importance in water electrolysis and fuel cells, the HER/HOR have long served as the model reactions in electrochemistry.1 A standing puzzle in the fundamental chemistry of hydrogen electrocatalysis is the origin of the orders of magnitude decrease in reaction kinetics when moving from acid to alkaline, which has seriously retarded the further development of electrochemical energy technologies based on alkaline electrolytes, and therefore has attracted great recent research interest.2,3

So far, there are several schools of thought to explain the kinetic sluggishness of HER/HOR in alkaline environments, for example, the hydrogen binding energy (HBE) theory,4 the proton donor theory,5 the water reorganization theory,6 and so on. However, these theoretical models are still under extensive debate, and little attention has been paid to the critical role of the structure of electric double layer (EDL) in electrocatalysis, due to the great challenge in elucidating the atomic structures of EDL accurately and then establishing its relationship with the kinetic pH effect of hydrogen electrocatalysis.

In the present work, taking the HER/HOR on Pt as the model system, the underlying origin of the pH-dependent reaction kinetics has been investigated by combining ab initio molecular dynamics (AIMD) simulation and in situ surface-enhanced infrared absorption spectroscopy (SEIRAS). Firstly, the atomic structures of EDLs at acidic and alkaline interfaces and the hydrogen electrocatalytic reaction processes have been investigated and compared through AIMD simulations (Figure 1). The results revealed that neither the hydrogen adsorption strength nor the water dissociation/formation barrier is responsible for the greatly reduced kinetics of hydrogen electrocatalysis in alkaline solution, because the alkaline interface could have more favorite hydrogen adsorption strength and lower barriers for individual Volmer reaction. Interestingly, by carefully analyzing the AIMD-simulated EDL structures, we noticed that there exists a visible gap region of water at alkaline interface, which results in greatly reduced connectivity of hydrogen bond networks. It is conceivable that this discontinuity of H-bond networks would severely inhibit the hydrogen electrocatalytic reactions, since the H-bond networks constitute highways for proton transport to/from surface, which is vital in hydrogen electrocatalysis. More importantly, the diminishment of H-bond networks in the alkaline EDL has been unequivocally verified by the agreements between the computational vibrational density of states (VDOS) and the experiment SEIRAS results. Therefore, we concluded that it is the significantly different connectivity of hydrogen-bond networks in the EDLs that causes the large kinetic pH effect in hydrogen electrocatalysis.

Figure 1. Atomic structures of EDLs at acidic and alkaline interfaces and the hydrogen electrocatalytic reaction processes. (a,b) Representative snapshots of the EDL structures at hydrogen evolution potentials on the Pt(111) electrode surface for an acid system (a) and alkaline system (b). The Pt, O, H, H3O+, Na+ and Had are coloured in grey, red, white, green, purple and yellow, respectively. The blue dashed lines represent the H bonds. (c) The calculated free energy barrier ΔG‡ of the individual Volmer reaction for the closest water molecules at the acid and alkaline interfaces. Error bars (s.d.) are calculated based on three individual slow-growth simulations. (d) The calculated hydrogen binding energies (HBEs) at the acid and alkaline interfaces. (e) Concentration distribution profiles of O atoms in water along the surface normal direction. The vertical dashed lines represent the CIPs. The horizontal black dashed lines represent the bulk water concentration (0.056 mol cm–3). (f) Statistical distribution of the number of H bonds along the surface normal direction. The shaded areas represent the gap zones of interfacial water and H-bond networks.

Finally, using Pt-Ru alloy as a model catalyst, the AIMD simulations showed that the adsorbed OH (OHad) on Ru site could significantly improve the connectivity of hydrogen bond networks at alkaline interface (Figure 2). This unanticipated role of OHad explained well why Pt-Ru is much more active than Pt for hydrogen electrocatalytic reactions in alkaline, and further confirms the critical role of interfacial H-bond network connectivity in controlling the HER/HOR kinetics.

Figure 2. Improvement of the connectivity of interfacial H-bond networks by OHad. (a–c) Representative snapshots of the AIMD-simulated interface structures on a Pt3Ru(111) electrode with (a) and without (b) OH adsorption, and that on a Pt(111) electrode (c) at hydrogen oxidation potentials. The Pt, Ru, H, Na+, O of water, O of OHad and Had are coloured in grey, blue, white, purple, red, orange and yellow, respectively. (d) The concentration distribution profiles of O atoms of water along the surface normal direction. (e) Statistical distribution of the number of H bonds along the surface normal direction. The green shadings represent the gap regions of interfacial water and H-bond networks.

These findings should add significant insights into the critical role of interfacial EDL in electrocatalytic kinetics, and provide a unique perspective to understand the electrocatalytic pH effects which are of general significance in various energy conversion reactions such as HER/HOR, CO2 reduction and nitrogen reduction. Meanwhile, this study also offers a referable research paradigm for exploring the structures and processes at the electrochemical interfaces by combining the AIMD simulations, computational spectroscopy, and experimental spectroscopy. 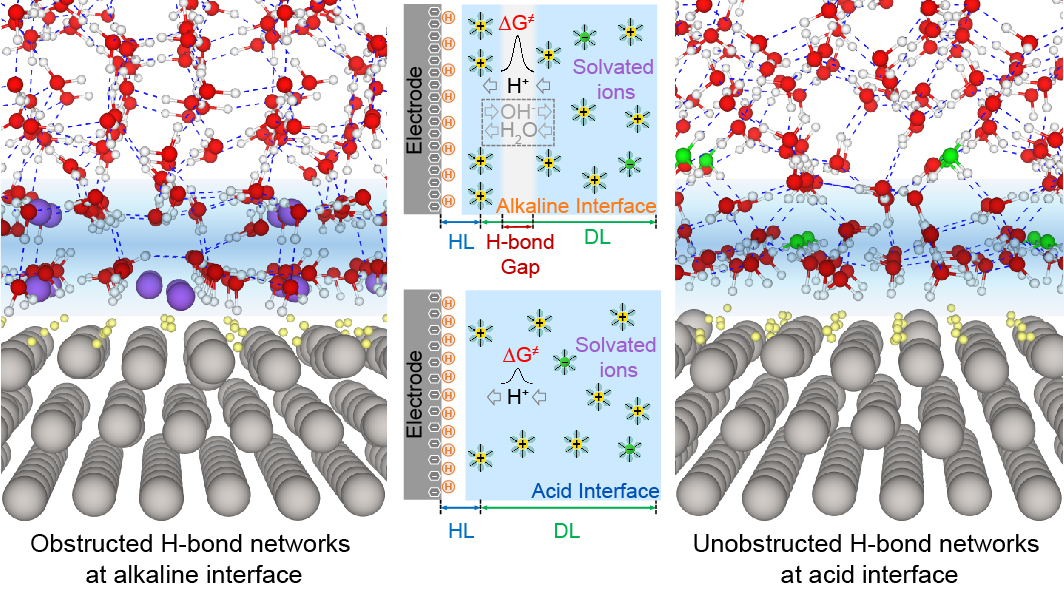 The origin of the great kinetic pH effect in hydrogen electrocatalysis remains far from having a consensus. Here, we propose that it is the significantly different connectivity of hydrogen-bond networks in the electric double layers that is responsible for this.