We demonstrate that metal-coordinate crosslinking sites can serve as the in situ mineralization sites to reinforce the hydrogel network.

As an enthusiast of basketball and many other physical sports, getting in strong and solid shape has been my great interest since childhood. In this regard, I have been always interested in how biomaterials in nature emerge in a soft, liquid-like state then solidify into a robust condensed matter. This solidification process is not at all simple, it combines together multiple mechanisms including mineralization, macromolecular crosslinking, dehydration, and many others sophisticatedly orchestrated by cellular biochemistry1–3. Such biomolecular solidification remains difficult to emulate with a material model, even without taking physiological aspects into account, since it includes the initial formation of soft matrix followed by the bottom-up in situ formations of inorganic components thoroughly associated with the macromolecular matrix. This nature’s pathway of building organic-inorganic materials is far from mixing external inorganic particles with soft matrix, which may produce many elastically inactive defects in the polymer network. We, therefore, hypothesized that the different solidification pathways - namely crosslinking and mineralization - might be closely linked together to trigger the reinforcement of a soft matter into a stiff condensed matter in a highly effective manner by following nature’s in situ mineralization approach.

In this work, we sought to artificially couple mineralization and macromolecular crosslinking through metal-binding ligand-ion complexation wherein metallic ions can participate in the crosslinking as well as the mineralization. To do so, we employed a hydrogel network crosslinked by 4-arm-PEG polymer of which each arm is modified with mussel-inspired catechol ligands that coordinate Fe ions (4cPEG) as a platform to find evidence supporting that metal-coordinate crosslink sites can serve as mineralization sites, whereby significant strengthening of the hydrogel network is achieved (Figure 1). We also compared conventional routes of making soft organic-inorganic composite hydrogel where mineral particles pre-formed ex situ were mixed with the polymer for crosslinking.

Figure 1 Schematic depiction of Fe-catechol network going through in situ mineralization at the metal-coordinate crosslinking sites to form a stiffened network. 4cPEG represents 4-arm-PEG of which each arm is modified with catechol moieties. Image courtesy of Ross and Abigail Regitsky.

We found that by first forming Fe-catechol coordinate network and then triggering the mineralization reaction, the iron oxide particles were able to nucleate and grow at the crosslinking sites, which not only resulted in good dispersion of particles but also enhanced the elasticity of the hydrogel. In contrast, using the identical types and concentrations of ingredients, but this time by first mineralizing outside the network prior to mixing with 4cPEG, we observed instant agglomerations of mineral particles along with a significant drop in the elastic modulus of the resulting hydrogel compared with its mineral-free counterpart.

The compromise in the network stiffness by the mixing-in method of external particles was similarly observed in a previous study wherein the same type of polymer (4cPEG) was incorporated with commercially available Fe3O4 nanoparticles to form a nanoparticle-catechol coordinate hydrogel4 (Figure 2). Furthermore, we found that the minerals at the crosslink sites could grow larger upon repeating cycles of in situ mineralization (Figure 1, 2), which increased the magnetization of the Fe mineral gels linearly according to the number of cycles without a tradeoff in gel stiffness. Notably, the maximum possible amount of Fe minerals within our in situ mineralized gels upon the 1st - 5th cycles of mineralization was 0.074  - 0.37 vol%, which is 5 - 25 times smaller than the 1.97 vol% of the commercial Fe3O4 nanoparticles incorporated for gelation of a conventional nanoparticle gel4 (Figure 2). If we normalize the achieved stiffness of these composite 4cPEG gels with the amounts of incorporated inorganic ingredients, this stiffness/inorganic ratio is up to ~200 times higher for the in situ mineralized gels. It suggests that we need significantly smaller amounts of inorganic resources to produce reinforced organic-inorganic composite hydrogels through an in situ mineralization strategy compared with the traditional particle mixing-in process. In addition, it also suggests that we can avoid the compromise in the mechanical properties when functionalizing (e.g., with magnetic properties) a soft network with inorganic particles. 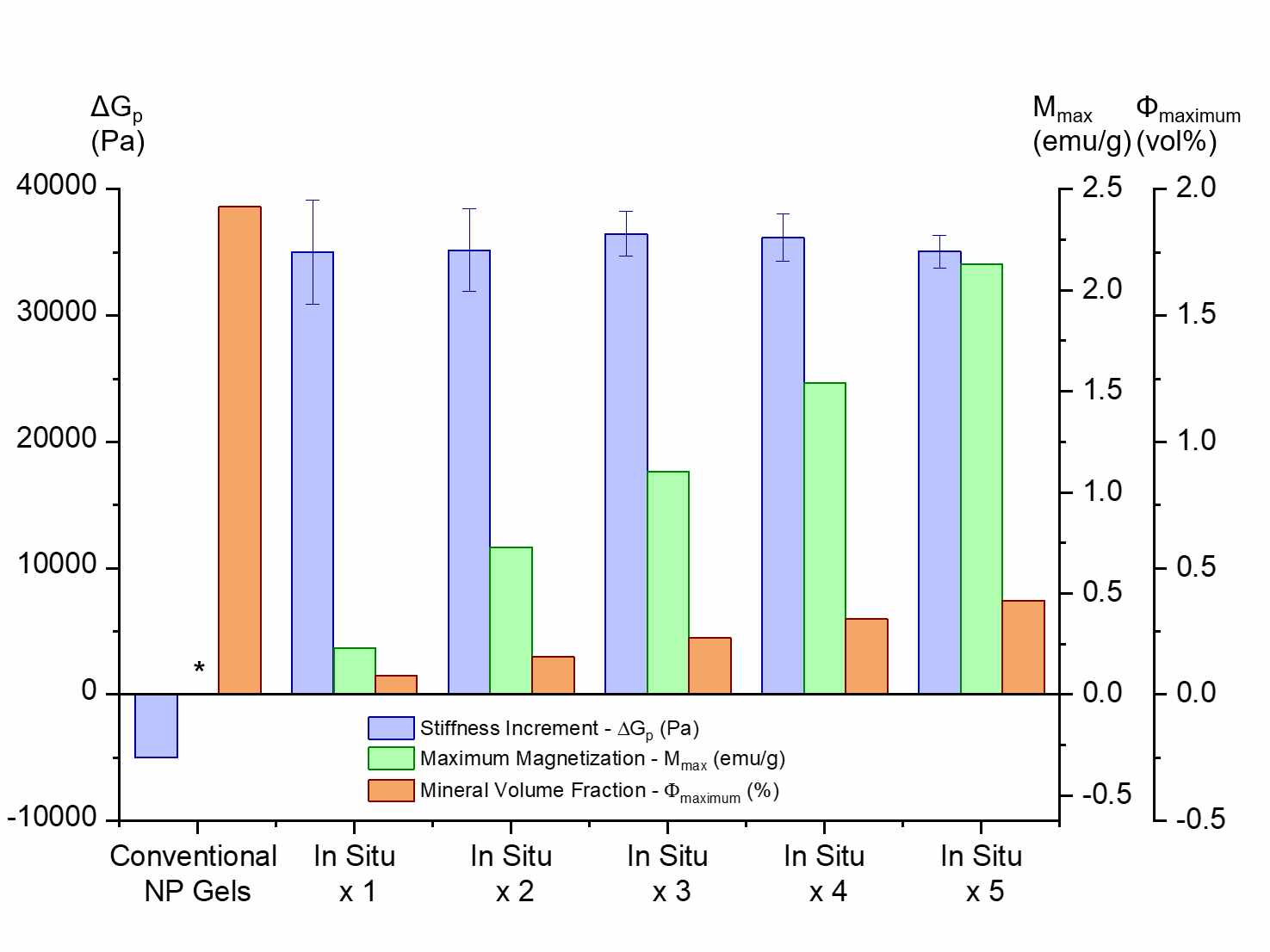 Finally, we demonstrated this in situ mineralization could apply to different metal-coordination systems using nickel or copper coordinated with histidine-modified 4-arm-PEG to induce similar solidification of the hydrogel. We are now looking to scale up the process in a bulk mineralization bath.

Viewing from the pure material processing perspective, our findings may imply how remarkably smart and efficient nature has been in reinforcement and resource-consumption within the solidification of soft materials. While our work here only demonstrates the synergistic coupling of macromolecular crosslinking and mineralization, there will be a much broader space to explore the relations between different natural solidification pathways, wherefrom we will find new inspirations to develop more efficient, sustainable material processing technologies. 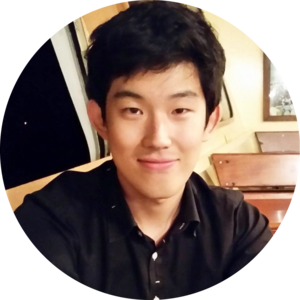