A community from Nature Research
Contributor Nature Materials
Behind the Paper

Zeolites are used as industrial catalysts and are very effective at converting methanol to fuels such as gasoline and chemicals including aromatics or olefins. However, in order to improve efficiency and reduce cost, we need to understand why their performance declines with time.
Andrew Beale
Professor, UCL
Follow

The methanol-to-hydrocarbons reaction on zeolites produces olefins from many sources, but catalyst stability is a major challenge. Here, by combining operando measurements and simulations, the formation and identification of deactivating carbonaceous species throughout the reaction are achieved.

The use of zeolites as catalysts in industry is a rapidly growing global phenomenon due to the fact they can be used in processes that provide 'drop-in' replacements to fossil fuels. The stability of their catalytic performance is perhaps the major challenge for the widespread use of this technology, specifically the fast formation of carbon deposits during operation severely compromises process efficacy both due to this short effective lifespan and the cleaning process required for reactivation.

Despite much research on zeolites over the past 40 years, their reaction mechanisms are complicated and there is still much to be learned. In that regards, spectroscopic techniques such as Raman spectroscopy, particularly when applied under operando conditions (i.e. as the catalysis takes place) can help to understand some of the evolving chemistry within the pores of the material. However, there is a major problem; sample fluorescence that occurs during the measurement process that can often swamp the signal rendering the data at best difficult to interpret but at worse, useless!

However, by applying a technique called Kerr Gate Raman, which was first developed at the CLF in 1999 (P. Matousek et al. Appl. Spectrosc, https://doi.org/10.1366/0003702991945993) our team at University College London and based at the Research Complex at Harwell, in collaboration with the Centre for Molecular Modeling (CMM at Ghent University) and the Central Laser Facility (CLF), made an insightful discovery about industrial catalysts using the CLF’s Ultra Laser. The article can be found in Nature Materials (I. Lezcano-Gonzalez at al. Nat. Mater. (2020). https://doi.org/10.1038/s41563-020-0800-y) and reports new understanding about what really goes on in these industrial catalysts when they deactivate. This discovery could potentially lead to future improvement in catalyst efficiency.

However, the issue with zeolites is that they emit a large amount of fluorescence during the interaction. This completely overwhelms the tiny Raman signals and makes it practically impossible to detect the useful Raman fingerprint.

Our team used the Ultra facility to apply a Kerr Gate modification to Raman Spectroscopy. This allowed us to take advantage of the different properties of fluorescence and Raman light, where Raman scattering happens instantly while fluorescence happens tens of picoseconds to nanoseconds after interacting with the object. This means that by using a picosecond pulse length laser for the Raman scattering it is possible to “gate out” the unwanted fluorescence after letting the Raman light come through.

The “Gating” in Kerr Gating relies on some very interesting physics to work. An intense laser beam operating in the near infrared triggers a liquid material called carbon disulphide to align its molecules briefly, making it birefringent (meaning that any light passing through changes polarisation). This lasts for about 3-4 picoseconds, after which the molecules return to normal and lose their birefringence.

Both types of light then in turn reach a crossed polariser that only allows the horizontally polarised Raman light through and blocks the vertically polarised fluorescence, leaving scientists with a clear Raman signal to read.

Using this technique, the team could see around 100X improvement in the signal quality and discovered something novel about the way the zeolites deactivated.

The science: For years, it was commonly thought that the formation of polycyclic aromatics on the surface of the zeolites was responsible for their deactivation. However, using a combination of Kerr gate Raman Spectroscopy and some insightful computational modelling, we were able to determine that what actually deactivates them is a species known as polyenes, which form before eventually reacting further to form the commonly found polycyclic aromatics.

This was a completely new and unexpected finding. It is with this knowledge the team has proposed a design criteria for zeolites with ideal characteristics in order for them to last far longer.

There are not only financial implications in doing this, but environmental. There are huge energy costs associated with having to reactivate catalysts frequently, so the longer they last for the more energy efficient they are. With this new knowledge, we are planing to continue our investigation into understanding how industrial catalysts work and how we can improve their performance.

Towards a calcium-based rechargeable battery 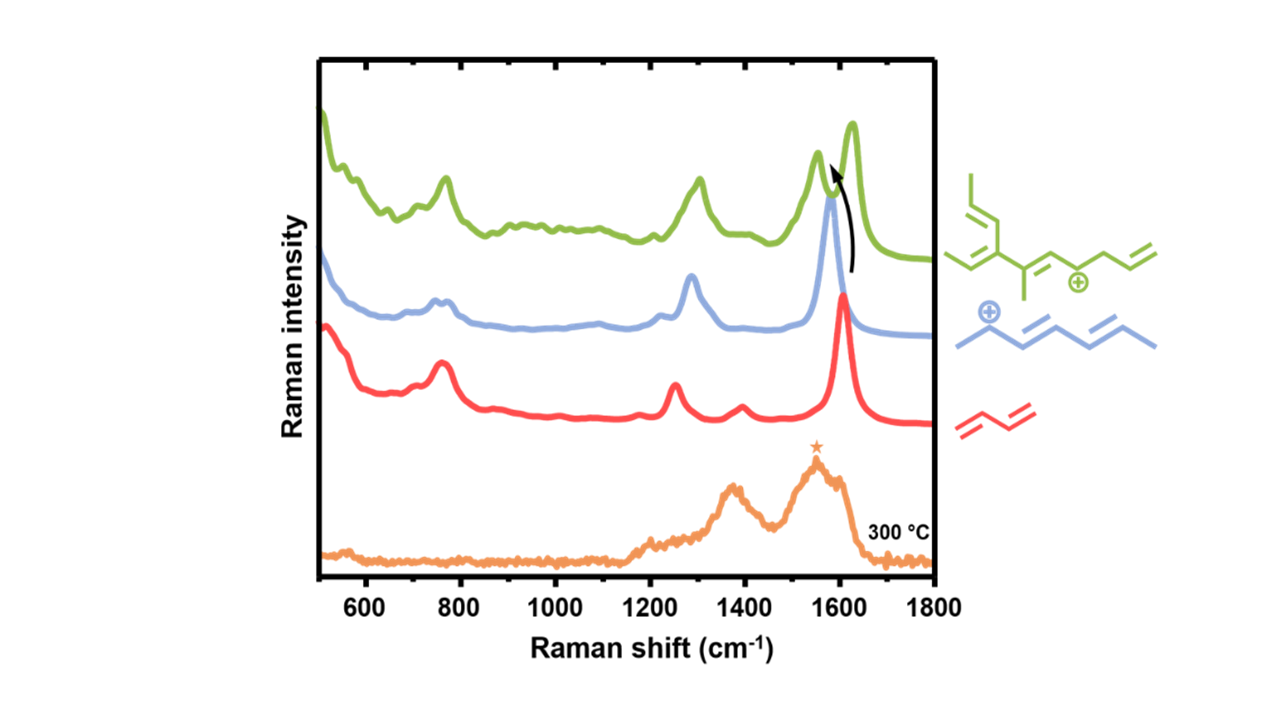 Zeolites are used as industrial catalysts and are very effective at converting methanol to fuels such as gasoline and chemicals including aromatics or olefins. However, in order to improve efficiency and reduce cost, we need to understand why their performance declines with time.