Per-and poly-fluoroalkyl substances (PFAS), as environmental pollutants, often show an adverse and severe impacts on environmental and human health due to their intrinsic high toxicity, extraordinary prevalence and persistence, and instant bioaccumulation. According to the U.S. Environmental Protection Agency (EPA), the PFAS concentration for combined perfluorooctanoic acid (PFOA) and perfluorooctane sulfonate (PFOS) in drinking water should not exceed the healthy advisory level of 70 ppt. Conventional PFAS adsorbents often have some limitations including low capacity, long equilibrium time, weak binding affinity, poor water/chemical stabilities, and low natural organic matter (NOM) selectivity, which limit their practical applications in the treatment of contaminated water. Therefore, it is an urgent task to develop advanced technologies for PFAS removal from contaminated water.

To overcome these drawbacks, it is essential to develop ideal types of PFAS-based adsorbents that possess the following features: (i) high hydrophilicity of the adsorbent particles and densely accessible functionalized capturing sites, benefiting for the well water wettability to facilitate the mass transfer of PFOA toward adsorbents in aqueous solutions and thereby achieving high PFAS uptake capacity in water; (ii) strong interactions with PFAS that can accelerate the adsorption rate; (iii) suitable pore size to avoid the co-adsorption of natural organic matter (e.g. humic acid, HA) in contaminated water during the adsorption process; (iv) exceptional water/chemical stability to facilitate regeneration/recyclability. Considering these factors, porous organic polymers (POPs), with porous aromatic framework (PAF) as the representative, were employed as a platform to construct PFAS adsorbent due to their physical and chemical properties. A synergistic binding sites protocol was illustrated to construct PFAS adsorbent by simultaneously introducing electrostatic and hydrophobic sites onto POPs as adsorption sites (Fig. 1).

As a result, PAF-1-NDMB as an optimized adsorbent exhibits extremely fast kinetics with the highest k2 value of 24000 g mg−1h−1 among all reported sorbent materials and a record high saturation PFOA (a model pollutant among PFAS) uptake capacity of over 2000 mg g-1 (Fig. 3a, 3b and 3c). The results of breakthrough experiment, in the present of HA (20 ppm), proved that PAF-1-NDMB exhibits highly efficient removal efficiency under the conditions of both low concentration (initial concentration: 500 ppb) and high concentration (initial concentration: 400 ppm) of PFOA, which is 14.6 and 19 times higher than that of benchmark material DFB-CDP under the same conditions (Fig. 4a and 4b). Besides, PAF-1-NDMB can remove 99.99% PFOA in practical wastewater (collected from Xiaoqing River, which is the most heavily PFOA polluted water area in China) within 10 s and reduce PFOA concentrations from initial concentration of 166.27 ppt to < 70 ppb (EPA advisory level) within 10 s (Fig. 4c). This proof-of-concept study is important because it can be readily extended to sorts of POPs, we believe that a large amount of POP-based PFOA sorbents would be emerged in the near future and thus realize the practical application for decontaminating PFAS from polluted water. 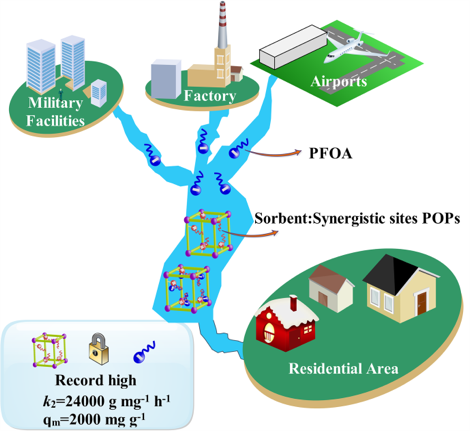 Functionalized porous organic polymers set a new benchmark for the removal of PFOA/PFOS.