How does a molecule encapsulated in a buckminsterfullerene respond to changes in the external environment? Is the surrounding buckyball the equivalent of a nanoscopic Faraday cage, providing complete isolation? Or does the fullerene couple its intramolecular payload to the outside world?

There are few, if any, papers to which I've contributed over the years whose page proofs I have more eagerly awaited than those for "Chemical shielding of H2O and HF encapsulated inside a C60 cage", published in Communications Chemistry  today. It's been a frankly tortuous path from the initial idea for the research project, via a series of repeated and repetitive measurements (including long, caffeine-fuelled hours at the Diamond Light Source (more on this below)), to the point where we finally had the proofs in our virtual hands. This is, of course, hardly surprising -- we all know that science never neatly follows the apocryphal hypothesise-experiment-conclude-publish routine. But in this particular case, it's been an even more convoluted path than usual -- frustrating at times, but also challenging, rewarding, and occasionally even a great deal of fun.

The idea behind the study was conceptually quite straight-forward. Molecular surgery, as it's called, can now synthesise a wide variety of endohedral fullerene molecules -- or endofullerenes for short -- whereby a molecule, such as H2, or CH4, or N2, or, in our case, H2O or HF (see below), can be inserted into the space inside a buckyball and then the "keyhole" stitched up, all via wet chemistry. (The ingenuity of synthetic chemists, such as our collaborators at the University of Southampton (Richard Whitby et al.) never ceases to amaze me. I'm a surface scientist/condensed matter physicist whose work is largely carried out under ultrahigh vacuum conditions - I run a mile from anything that looks vaguely like a test-tube.) 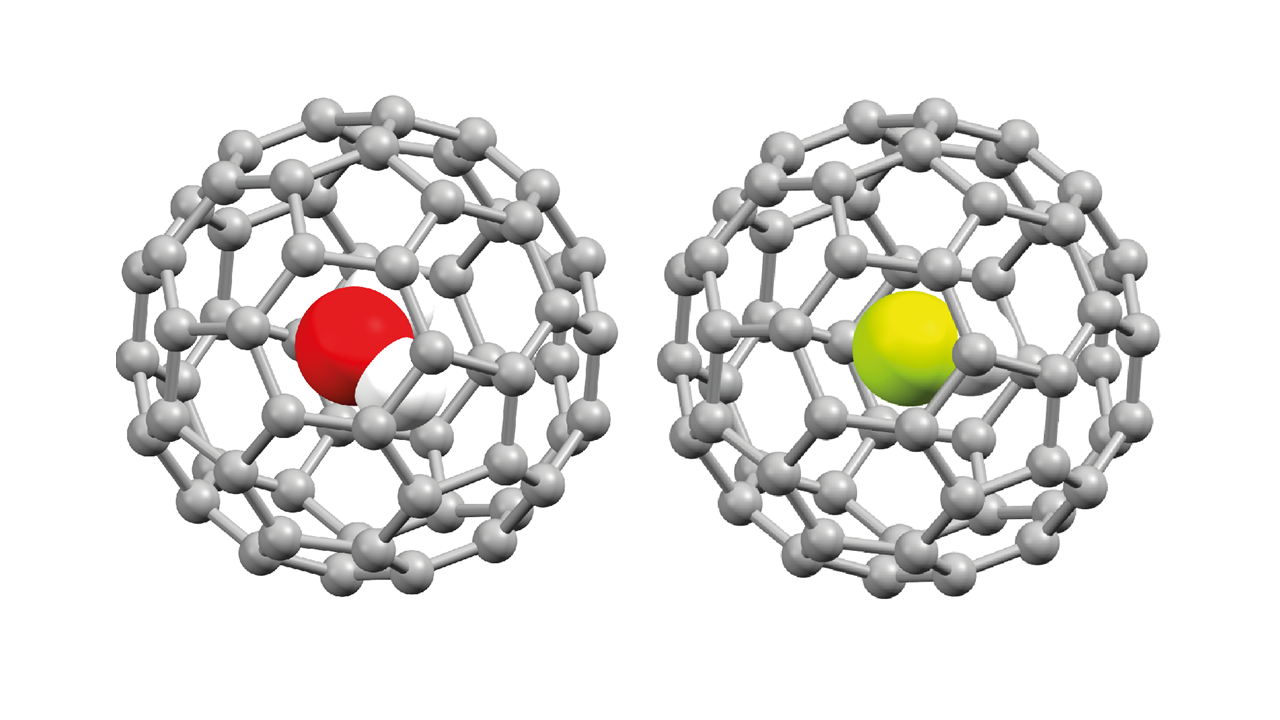 What we wanted to do was explore just how structural and electronic changes in the surrounding C60 cage, due to adsorption on a solid surface, affected the position of a water (or HF) molecule contained within; with tongue firmly in cheek, let's call it intramolecular water divining, or water dowsing if you prefer. (We'd attempted something similar years before for the Ce@C82 endofullerene but it lacks the symmetry and structural "purity" of its smaller endofullerene siblings, H2O@C60 and HF@C60.) Our usual experimental technique of choice is scanning probe microscopy -- an exceptionally powerful instrument that now routinely enables measurements that were considered to be perennial Gedankenexperiments as recently as a few decades ago. What other technique enables not only filled and empty state electron density, but chemical architecture down to the single bond limit, to be imaged with sub-molecular resolution? Or to map the potential energy landscape and force field associated with just two interacting molecules (in this case, fullerenes), or between atoms, or, indeed, between an atomically precise tip and an artificial atom? Or to position individual atoms and molecules with sub-atomic precision? Or, as pioneered very recently, to coherently manipulate the spin of individual atoms?

But when it comes to the endofullerenes we studied, and despite their exceptional resolving power, scanning probes are in rather deep water. The encapsulated H2O makes no detectable contribution to the frontier orbital density of states of the H2O@C60 molecule (see Fig. 1 of the paper) meaning that filled and empty cages look identical in scanning tunnelling microscope (STM) and high resolution atomic force microscope (AFM) images. (This is for "traditional" STM and AFM where the experimental observable is the tunnel current and/or the frequency shift of the tuning fork sensor used to detect the tip-sample force gradient. We are currently exploring other approaches for detecting the encapsulated molecule with SPM.) We measured for many, many weeks and failed to distinguish between H2O@C60 and its unfilled counterpart, C60, adsorbed as molecular sub-monolayers and monolayers on a copper surface.

But even if traditional STM or AFM could distinguish between the filled and empty endofullerenes, neither has the capability to directly determine the position of the water molecule inside the cage. For that we turned to the powerful normal incidence X-ray standing wave technique (aka NIXSW; surface science is awash with abbreviations and acronyms) and Beamline I09 at the Diamond Light Source. The video below, for the Sixty Symbols YouTube channel -- a collaboration between Brady Haran and the School of Physics & Astronomy at the University of Nottingham -- describes both the NIXSW experiments and Diamond itself. In an accompanying "supplementary information" video, I highlight the essential role that not only the beamline scientists --  namely, David Duncan, Tien-Lin Lee, and Pardeep Thakur, all co-authors of the paper -- played in our experiments but the core importance of skilled technical support; technicians are too often the unsung heroes of experimental science. In this case, technical support came from the ever-reliable and ever-patient Dave McCue, the I09 beamline technician.

More broadly, the advice given by Springer Nature -- specifically, in Ruth Milne's extremely helpful advice re. writing a "Behind The Paper" post -- states that we should "Make it personal – tell the story behind the study, what worked well and what didn’t. Include anecdotes about people you met at conferences, who you collaborated with and who helped on the project." This is exactly what my colleagues and I at Nottingham try to do via the Sixty Symbols project -- to humanise the scientists, and therefore humanise the science. So much of scientific activity involves social dynamics; we do our best, of course, to be as objective as possible but success (and failure) in science can so often depend on collaborating with the right people at the right time. And this was especially true for our endofullerene saga.

That video above was uploaded in mid-2017 -- quite some time ago. It took another round of beamtime, a great deal of collaborative to-and-fro with our theory collaborators at Kings College London and Jianghan University (Lev Kantorovich and Hongqian Sang), and low energy electron diffraction simulations and analysis (courtesy of Georg Held, also at Diamond) before we could finally reconcile the experimental measurements with the outputs of the theoretical calculations and simulations. (The world outside science also imposed on occasion...)

As Pauli put it so pithily, the surface was indeed invented by the devil: the uncooperative C60 cages adopted two distinct bonding sites on the metal surface we used, significantly complicating the NIXSW analysis. Nonetheless, by combining and comparing our experimental and theoretical data we find that although the encapsulated H2O and HF molecules are indeed chemically isolated inside the buckyball, they both nonetheless are influenced by an intracage electric field that is established due to the adsorption of the molecule on the underlying metal substrate. So, far from acting as a Faraday cage, the fullerene itself establishes the electric field with which the encapsulated molecule interacts.

Why should anyone care about the results we've published? Why does it matter whether an encapsulated molecule interacts with its environment or not? Well, leaving aside the oft-mooted (and perhaps ever-so-slightly overhyped) ability of endofullerenes to potentially act as quantum bits -- where coupling to, and isolation from, the environment is of especial importance -- there is the broader question of screening of electrostatic fields and interactions (covalent, ionic, and/or dispersion-induced) at the nanoscale. Moore's law is, in essence, dead; commercial silicon technology reached the sub-10 nm feature scale a number of years ago and the control of electrostatic (and dynamic) fields and charges at not just the nanoscale, but at the atomic level, is a core aspect of state-of-the-art device operation. Our results show that even an encapsulated molecule that is chemically decoupled from its environment -- i.e. its density of states does not contribute to its "parent" fullerene -- can be influenced by the electrostatic field established by its surrounding molecular cage. This has the potential to place significant constraints on scaling down traditional (i.e. von Neumann), unconventional (e.g. neuromorphic), and quantum computing architectures. 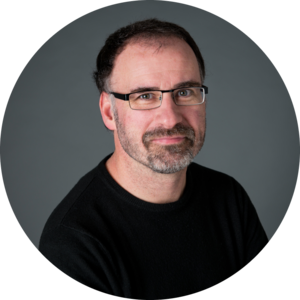 Professor of Physics, University of Nottingham