Concentration of air pollutants has generally been considered uniform in indoor environments. Here, the authors show that chlorinated cleaning products generate concentration gradients of pollutants due to photochemical reactions in sunlit areas, requiring a finer assessment of human exposure to the…

There has been an assumption for many years that indoor air is relatively well mixed. Therefore, measurements have often been made at a single point within a room and kinetic models have treated the indoor gas phase as having a homogeneous composition. Concentration gradients in indoor air could impact human exposure to harmful species as well as our understanding of chemistry occurring indoors. In this paper we wanted to test whether different species would be well mixed in indoor air and the factors that could lead to concentration gradients. We determine the spatial distribution of species generated after one specific cleaning event and subsequently generalize our findings to different gas phase compounds and particle sizes with a variety of sources.

Over the last few years the Alfred P. Sloan foundation has funded many indoor chemistry projects with the aim of improving our knowledge of this historically understudied area of research. One of these projects is the House Observations of Microbial and Environmental Chemistry (HOMEChem) campaign where different gas phase species were measured at single points in a house while different activities, such as cooking or cleaning, occurred. State-of-the-art online measurements have been used in the current publication and were performed by the research groups of Farmer, Stevens, Abbatt, DeCarlo and Kahan. Another project is the Modelling Consortium for Chemistry of Indoor Environments (MOCCIE) which has the goal of developing models to quantitatively predict the composition of indoor air and the chemical and physical processes controlling it. The HOMEChem and MOCCIE teams have collaborated on many projects and the Shiraiwa group recently developed a kinetic model to better understand HOMEChem measurements of gas phase species after mopping a floor with bleach. In the current paper, this kinetic model was used to calculate the concentrations of species directly above the bleach and to determine critical gas phase reactions with this information being subsequently inputted into the Rim’s group computational fluid dynamic (CFD) model. Additionally, hydroxyl radical (OH) concentrations that had been measured next to a window were modelled by the Carslaw group using the INdoor Detailed Chemical Model (INDCM) and they outputted OH production and loss rates which were used in the CFD model. The CFD simulations treated air flow, uptake to surfaces and critical gas phase reactions allowing spatial distributions of species generated after mopping the floor with bleach to be determined.

In our publication we show that many chemical species are not homogeneously mixed in indoor air. After bleach mopping, elevated concentrations of OH radicals are expected to be confined to spaces next to windows as these are rapidly formed by photolysis but reacted away rapidly in darker regions of the room (Figure 2). HOCl, ClNO2 and NCl3 which are formed in the bleach are predicted to have significant vertical concentration gradients above the bleached floor and to have higher concentrations in the room where the mopping occurred compared to other rooms. Having demonstrated that species in indoor air are not necessarily homogeneously mixed we generalized our results to other compounds by considering their decay rates due to chemical reaction, photolysis, surface deposition, ventilation and in the case of particles coagulation. Radicals have very short lifetimes and cannot be transported long distances resulting in elevated concentrations close to their source and strong concentration gradients. Moderately long lived species (e.g. NH3, NO, Cl2, and O3) would have spatial gradients in a room with their concentrations being determined by reactions and indoor air flow conditions. Additionally, particulate matter is unlikely to be homogeneously mixed on room scales with its spatial distribution being influenced by the size of the particles as well as the air flow. In contrast, long lived species (e.g. VOCs, NO2, and CO2) would be expected to be well mixed indoors. The likelihood of species being well mixed should be considered when making indoor air measurements or creating new models in the future.

Figure 2: The predicted vertical and horizontal spatial distribution of (a) OH and (b) HOCl after cleaning with bleach as predicted by CFD simulations (Figs. 2a and b in the paper).

To learn more about our paper which was published in Communications Chemistry please click here. 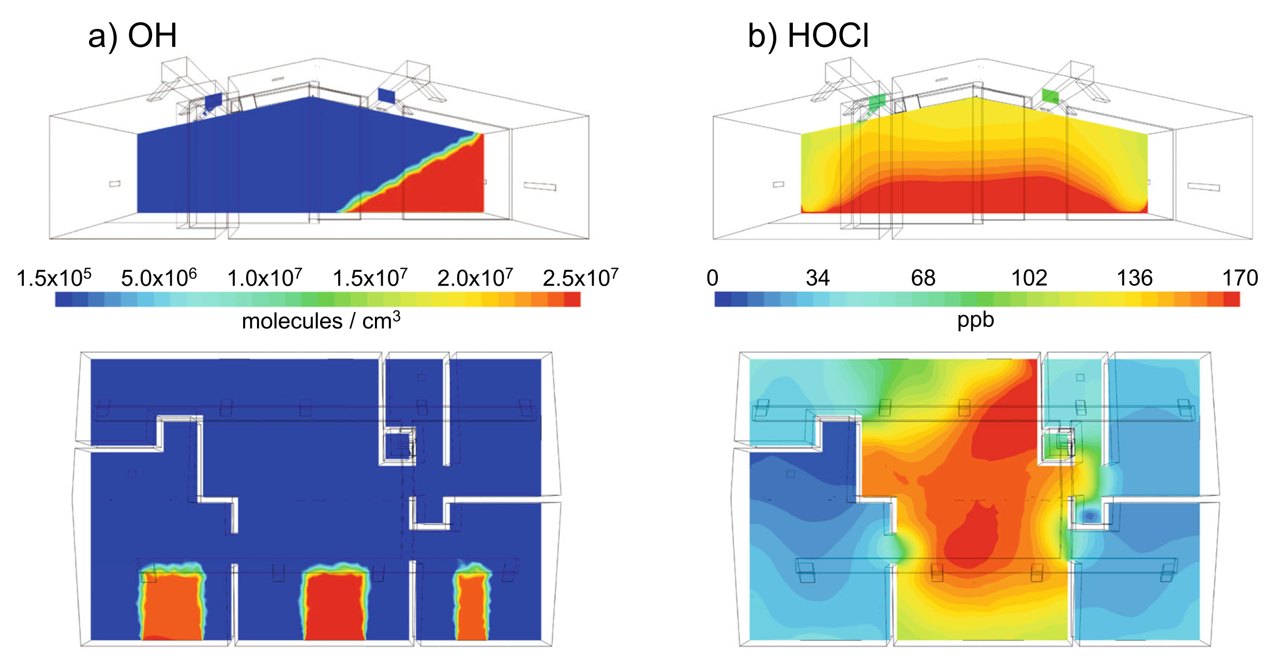