Zwitterionic organophosphorus species are a biologically and synthetically important class of reaction intermediates. While the solid foundation of phosphorus chemistry was built during a period from 1950s to 1980s, there still remains two major issues: (i) isolation of phopha-Michael adducts (A and B) and (ii) reaction mechanism for forming β-oxo-phosphorus ylides from corresponding 1,2-dicarbonyl compounds. In the paper “Organophosphorus zwitterions engaged in a conjugated macrocycle on fullerene” recently appeared in Communications Chemistry, we provide rational answers.

Our strategy is to use a conjugated macrocycle consisting both of α,β-unsaturated carbonyl and 1,2-dicarbonyl moieties, which are embedded in a skeleton of fullerene C60. It potentially permits nucleophilic attack by phosphines due to the excellent electron-accepting ability and stabilizes the thus formed zwitterionic species along with the 60π-electron system.

We aimed to synthesize β-oxo-phosphorus ylides by heating the reaction mixture of 1 and phosphines. Whereas less-steric ones were readily hydrolyzed, all β-oxo-phosphorus ylides could be obtained and purifiable by flash column chromatography. It has long been postulated that the carbene intermediate (D) should be formed from Kukhtin-Ramirez adduct (C). As has often been the case in the last decades, carbene scavengers, e.g., terminal olefins and alcohol, could not trap any species in our system, too. In addition, theoretical calculations (M06-2X/6-31G(d,p), 298 K) suggested the carbene intermediate is quite unstable (ΔG 59.2 kcal/mol), being in line with another sets of calculations using a simple model, acenaphthenequinone (61.4 kcal/mol). With these accumulated evidences in hand, the present study tells an alternative pathway which includes the SN2 reaction as a key step instead of hitherto considered carbene pathway, supported both experimentally and theoretically.

In the course of this study, we found an unstable compound formed at room temperature when 1 equiv of phosphine was employed. Initially, we thought this compound is an intermediate such as 1-phosphonium-3-carbabetaine or Kukhtin-Ramirez adduct for giving β-oxo-phosphorus ylides. Even though this compound is, unfortunately, moisture- and air-sensitive and might exist under equilibrium, the great method to gain its crystals was developed by an excellent student, Mr. Shu Okamoto who is one of co-authors in the title paper (see details in Supplementary Information). The crystallographic analysis revealed the structure possessing a phosphonium betaine moiety that was then found to be formed via phospha-Michael addition to the α,β-unsaturated carbonyl group. This is the first phospha-Michael adduct engaged in polycyclic aromatic compounds.

Importantly, an introducion of a phosphonium substituent changes electronic structures of our spherical π-conjugated system, resulting in intense NIR absorption that tails to 1,000 nm with drastically elevated HOMO levels. Thus, phosphonium modification would be beneficial for creating a variety of functional π-conjugated materials. 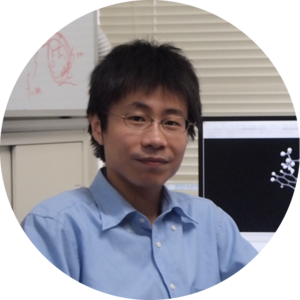