Ice forms easily when water is in contact with a cold surface - a process well understood macroscopically in contrast to its microscopic origins. Read how long-range repulsive forces between water molecules on graphene introduce a kinetic barrier to the process and its implication to ice nucleation.
Toni
Tamtögl, Graz University of Technology
Follow
Like Be the first to like this
0

The dynamics of water molecules at interfaces controls natural and artificial processes, but experimental investigations have been challenging. Here the authors investigate water molecules on a graphene surface using helium spin-echo spectroscopy, and reveal a regime where freely mobile molecules un…

To understand why ice forms on solid surfaces, the molecular basis of the water-surface interaction needs to be studied. T. Bartels-Rausch noted in 2013[1]:

In my view, the chemistry and physics of ice need to be studied more on a molecular scale if we are to address the massive environmental problems we face.

However, the early stages of ice nucleation involve exceedingly small time and length scales and unravelling the microscopic details presents one of the great challenges in physical sciences[2].  On the macroscopic scale, wetting, hydrophobicity and ice nucleation are all widely studied using routine methods such as contact angle measurements. But at a molecular level, experiments are met with several complications: It is difficult to achieve sufficient contrast and resolution with imaging techniques, while electron based techniques present a severe risk of beam damage[3]. Therefore, we use the most delicate surface-probing technique - scattering of a He atom beam - which is also sensitive to hydrogen atoms in the top layer. In a previous work, we were able to measure the dynamics of water on a topological insulator surface by using this technique, followed by an assessment of the rate of energy transfer between the water molecules and the substrate[4].

We then found that within a small temperature window, individual water molecules diffuse in dynamic equilibrium with these islands of ice - providing us with a regime where the dynamics of freely mobile water molecules on graphene can be studied.

The dynamics of water monomers

Dynamical measurements which can examine the nature of water interactions on surfaces are complicated by fast diffusion rates and the short lifetimes of water monomers. Insight has therefore been mostly limited to numerical simulations.  Here we employ the helium spin-echo (HeSE) technique (Figure 2a), to measure the molecular motion based on wave packet splitting and recombination[4,5,6].

Sidenote: Actually we wanted to measure the diffusion of H and H2 on graphene, in the context of fuel cells. But it turned out that the former moves too slow and the latter too fast within the accessible temporal resolution[7] and we thus turned to the dynamics of water instead.

Temporal correlation functions of the form illustrated in the top inset of Figure 2a describe the changes in the surface configuration due to the motion of water, over picosecond time-scales and on reciprocal space length-scales between 2 Å and 200 Å. The variation of the dephasing rate, i.e. the rate of decay of the correlation measurements, as a function of the surface parallel scattering momentum transfer ∆K (Figure 2b), provides a signature of both the mechanism and rate of the molecular motion. We found that individual water molecules move by jumping between the centres of the graphene hexagons as illustrated in Figure 2a. Our measurements on graphene indicate a higher diffusion rate than experimental values for other substrates; many orders of magnitude faster than diffusion in the bulk[5]. More importantly, we are able to establish that, contrary to expectations, strong repulsive interactions exist between the adsorbed water molecules.

We attribute these forces to dipolar interactions, arising from structural hindrance of water reorientation by the adsorption geometry: See the water dipole, illustrated by the blue/red arrow in the bottom panel of Figure 2b. The repulsive nature of these forces is confirmed by kinetic Monte-Carlo simulations which reproduce the steep rise of the experimental data at 0.5 Å-1 (highlighted by the orange arrows in Figure 2b). The latter is a characteristic feature of inter-molecular repulsion. Attractive forces on the other hand, suppress the jump rate (green line) while for no interactions (grey line) the molecules move independently.

The alignment of the individual water dipoles perpendicular to the surface plane, leads to these strong repulsive interactions. The repulsive forces act to keep the water monomers apart, thus increasing the mobility as described above, while at the same time suppressing the nucleation. Short range attractive forces and hydrogen bonding play a major role in the clustering of water but in order for a water cluster to nucleate, molecules must first come into close proximity and then re-orient to adopt a hydrogen bonded configuration. Therefore, the long-range repulsive forces must be overcome for ice nucleation to occur, which in turn increases the lifetime of water monomers in our experiments.

The way to applications in the broader context of ice formation

Our study represents an important step in unravelling the unique behaviour of ice and the complex relationships between adsorption, diffusion and inter-molecular interactions. Attractive forces and hydrogen bonding - which are dominant at high coverages - have always been assumed to control the onset of ice nucleation. In stark contrast to that assumption, the reported kinetic barrier arising from strong repulsive forces is a novel mechanism that can inhibit ice nucleation.

The fundamentally new understanding of water transport and assembly on the nanoscale that emerges from our work has the potential to become a new paradigm.  It could open up opportunities for the design of advanced materials by tuning surfaces at the nanoscale. Dipole formation occurs widely upon adsorption and whenever those dipoles are prevented from reorienting during diffusion, dipole-driven inter-adsorbate repulsion is viable. It suggests broadly applicable strategies for further suppressing or otherwise controlling the ice nucleation process, by enhancing the dipole formed during adsorption: E.g., using surface treatments or in the case of graphene by altering the supporting substrate.

While the hydrophobic character of the graphene and particularly the adsorption geometry play important roles, it seems reasonable to expect that the effect could apply much more generally. We thus hope that the wide ranging implications for fields as diverse as nanofluidics, astrophysics and biology will stimulate a wide range of new research, understanding and application. 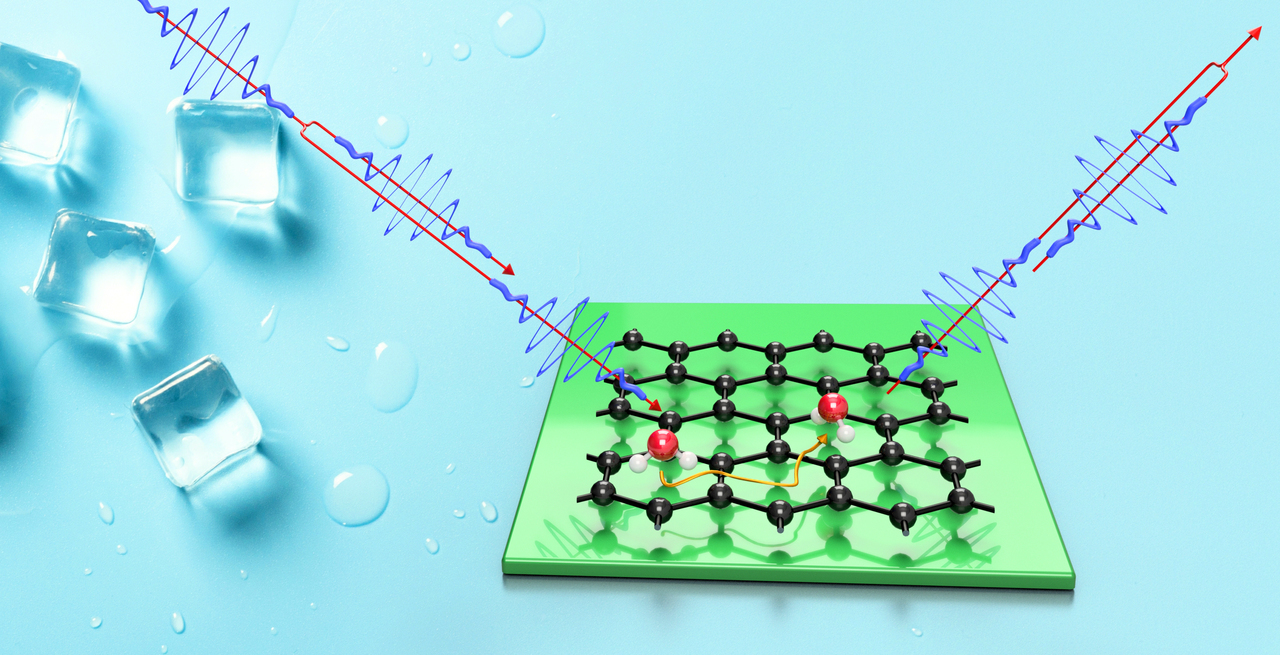 Ice forms easily when water is in contact with a cold surface - a process well understood macroscopically in contrast to its microscopic origins. Read how long-range repulsive forces between water molecules on graphene introduce a kinetic barrier to the process and its implication to ice nucleation.