One of the goals of modern materials science is to create dynamic and adaptive systems. Many classes of molecules, such as switches, shuttles and motors, predictably change geometry in response to stimuli and can thus be used to transfer information upwards, from the molecular scale to our macroscopic world. This research has been the focus of the Katsonis group for many years, using liquid crystals as a medium of choice.[1]

The collaboration between the molecular knots team in the Leigh group and the supramolecular materials experts in the Katsonis group started naturally, from the similar group philosophies and our love for blue-sky research. Molecular knots are a far less well-developed class of mechanically entangled molecules than their siblings rotaxanes and catenanes, but in recent years scientists have started to explore the properties and functions of this intriguing class of molecules.[2] In the Leigh group, we have discovered that if three 2,6-pyridinedicarboxamide ligands are linked together covalently, they fold into a knot in the presence of lutetium(III).[3] The so-called overhand knot forms with a single-handedness determined by the chiral character of the ligand strand.

We realized when we measured CD spectra of the lanthanide knots and corresponding strands that due to the knot handedness, the chiral expression was completely different before and after knotting – despite the fact that we did not add any chiral material to the system! We thought that knotting and unknotting perhaps might switch handedness on command, and that this could be really interesting in soft materials. We in the Manchester team are big fans of the amazing work of Nathalie, and we fired off an email to ask whether her team wanted to test our knots in liquid crystals (“just to see what happens”). She replied immediately with great enthusiasm, even if she predicted that the work would be “technically difficult” (she was not wrong!). 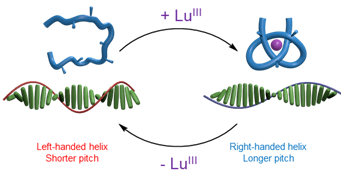 Figure 1. Using the tying of a dopant strand into a molecular knot at the nanoscale to reversibly invert the chiral expression at the macroscale.

And so we embarked on a journey full of countless online calls, express deliveries and email chains. This work was conducted over 18 months in two laboratories in the UK and in the Netherlands, all in the shadow of a looming Brexit. With a team of six people with a total of eight nationalities – British, French, Greek, Russian, Italian, Romanian, Swedish and Swiss – this work sometimes felt like the scientific equivalent of the Eurovision Song Contest (but with a lot less glitter and feather boas). We got a fantastic collaboration going very quickly, had lots of fun along the way and both teams really benefitted and learned from each other.

The project turned out to be at the same time more challenging and more straightforward than what we had imagined. We actually observed the main finding of the study more or less right away – that the folding of the molecular strand into a knotted shape completely overrides the chiral preferences of the strand and leads to helix inversion of the liquid crystal. Such a dynamic inversion is unusual, and we realized that it had not previously been achieved with chemical stimuli. This meant that the same molecule in knotted and unknotted states had opposite handedness in terms of its chiral expression. To expand on an analogy we used in the manuscript – this would be like making a left hand suddenly fit into a right-handed glove by simply placing a little rubber ball in its palm!

Figure 2. Switching liquid crystal helical organization from left-handed to right-handed and back by tying and untying a molecular knot through the addition of chemical stimuli (LuIII and F-).

The first generation of knots we tested had poor solubility, and it was challenging to measure the very long pitches they induced in the liquid crystal. Alexander keeps a folder of "might be useful someday" papers and it is in one of these papers that the Katsonis team found a solution to measure long pitches, by using a so-called θ-cell.[4] We also worked on increasing the solubility of the knots by tuning the backbone components of the strand. We could thus eventually demonstrate knotting and unknotting inside of the liquid crystal, which meant we could create a material that switched back and forth between left-handed and right-handed chiral organization in response to lanthanide ions and fluoride ions, respectively. Beyond the fundamental importance of this observation and what it teaches us about the physical consequences of knotting, the work also shows how molecules can control the dynamics of helix-inverting systems, and evidences an artificial mechanism for chiral information transfer across multiple length scales.

You can find a link to the full paper here! 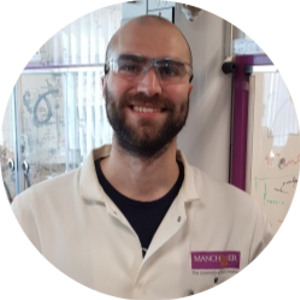