A decade ago the first rare-earth-metal dependent enzyme was discovered, in which a non-redox lanthanide ion is central in the active site of a methanol dehydrogenase. Inspired by this discovery, here the authors show that an open-shell semi-quinone anionic radical species, complexed with lanthanum,…

The creatures in our planet have evolved effective and powerful abilities for survival during the long-time environmental change which could be attributed to different functional enzymes. These enzymes have already been “screened” and “optimized” to exhibit the best performance in the living system to adapting the environment. Learning from these enzymes could help us understand the basic principles and design superior catalysts.

Quinoproteins are recognized as the third redox enzyme besides pyridine nucleotide- and flavin-dependent proteins which own a quinone cofactor enabling amine and alcohol oxidation. Several years ago, we have developed bio-inspired ortho-quinone catalysts with the cofactor of copper amine oxidase, TPQ as a blueprint for the oxidation of amines. Our simple and efficient ortho-quinone could not only oxidize primary amine, even α-branched primary amine, but also secondary amine and tertiary amine which are inert substrates for copper amine oxidase. After we disclosed the reaction pathway of amine oxidation, we turned our sight into another quinoprotein—methanol dehydrogenase. Methanol dehydrogenase (MDH) are common in methylotrophic bacteria and provide carbon and energy for bacteria by oxidizing methane and methanol. Due to the different metals employed in the active site, MDH could be divided into two parts: Ca-MDH and Ln-MDH. The central metal could improve substrate affinity, polarize the carbonyl group of the quinone cofactors and stabilize the negative charge intermediate. Hence the Ln-MDH with lanthanide as central metals owning strong Lewis acidity, high coordinate numbers and abundant are more spread and exhibit higher oxidation ability than Ca-MDH. Due to the methanol oxidation solely occurred on the PQQ cofactors, there are many biomimic PQQ model compounds designed to investigate their redox property since the discovery of PQQ. However, these compounds are hard to synthesize and their catalytic efficiency are too low to be employed in organic synthesis. Hence, developing more efficient and simpler quinone catalysis for alcohol oxidation remains a worthy goal.

We spent several months to screen possible conditions for the oxidation of benzyl alcohol, while the yields were all less than 5%. When NiI2 was used as additive, the oxidation could afford benzaldehyde under elevated temperature and we found these three parts: Ni2+, I- and ortho-quinone are all essential. After that, numerous attempts had been tried and we did not get any improvement on catalytic performance. We also tried to carry out some kinetic experiments to acquire more information about the oxidation, but failed. Because an induction period was observed to make the solution homogenous when NiI2 was gradually dissolving into MeCN. Hence, the reproducibility of kinetic experiments was very bad and we got nothing useful about the reaction process.

This dilemmatic situation lasted for several months until we tried rare earth metals replacing the nickel following the nature does. To our surprised, La(OTf)3 could make the oxidation occur smoothly at room temperature within 2 hours. Further screening of metal ion brought this oxidation to a higher stage: all of the rare earth elements could provide a huge improvement on catalytic efficiency. Using two component catalysts, LaI3 and ortho-quinone, could even drive the reaction completion with only 1 mol % catalyst. And we were delighted that the oxidation rate of benzyl alcohol was faster than Cu/ABNO—the fastest aerobic catalysis of alcohol oxidation. Moreover, this mild and green method exhibited very high efficiency, high chemoselectivity, and good functional group tolerance.

During methodology studies, we gradually realized that this catalysis seemed to be totally different with known aerobic catalysis (i.e. DDQ, Cu/TEMPO, Pd etc.). All previous alcohol oxidation catalysis require base to deprotonate, additional base did not lead any improvement on our catalysis, and dramatic color change (red-green-red) was noted during the oxidation which might be attributed to active species generated in situ. Subsequent control experiments and spectral data were also agreed with our preliminary speculation. The ortho-quinone would be reduced to semiquinone radical anion by iodide anion with the assistance of lanthanide. Though semiquinone radical anions are common in the quinone recycle, there is no reports about semiquinone directly involved in substrate oxidation. Compared with quinone, semiquinone radical anions are less electron-deficient which have weak oxidation ability. Next, UV-Vis and EPR quenching experiments were carried out to figure out the role of semiquinone radical anions as either the resting state of catalysts or catalytic active species. And we could clearly observe the decrease of adsorption with the increasingly added benzyl alcohol and formation of benzaldehyde. While unfortunately, efforts to determine the solid structure by crystalizing the possible La(III)-semiquinone complex have been in vain. Instead, we investigated the complex by ESI-MS and the expected 1:2 complex of La(SQ-.)2+ could be identified.

In the previous reports, the detailed dehydrogenation of alcohol follows a stepwise mechanism: deprotonation-initiated hydride transfer or direct hydride transfer. For the deprotonation-initiated hydride transfer, KIE effect could be found on C-H bond or O-H bond, and base would affect the reaction outcome. However, the KIE experiment and Hammett correlation experiment results in our case were different from previous examples: both O-H and C-H of benzylic alcohol had the primary kinetic isotope effect and positive charge was developing on benzylic position during H-transfer. Considering the rather low BDE of hydroquinone and the absence of radical-rearrangement products, the hydrogen atom transfer could be excluded. Due to the low basicity of hydroquinone, we propose a proton-coupled hydride transfer to account for the experimental results.

Based on the experimental observation, we got the conclusion: the key to success was an in-situ reductive activation of ortho-quinones to semiquinone anionic radicals, which upon complexing with La, participating in a concerted dehydrogenation process for the oxidation of alcohol into aldehydes/ketones or esters. Lanthanum ion served only as a Lewis acid promoter and the redox process occurs exclusively on the semiquinone ligand.

Our work provides a novel reductive activation strategy for aerobic oxidative catalysis and implies a possible functioning mode of semiquinone radicals beyond simply positing as a recycling intermediate of quinone cofactors. Next, we wish our small but powerful ortho-quinone catalyst could be introduced into the protein which could be evolved into a superior enzyme than the wild enzyme in nature—from the enzyme and beyond the enzyme. 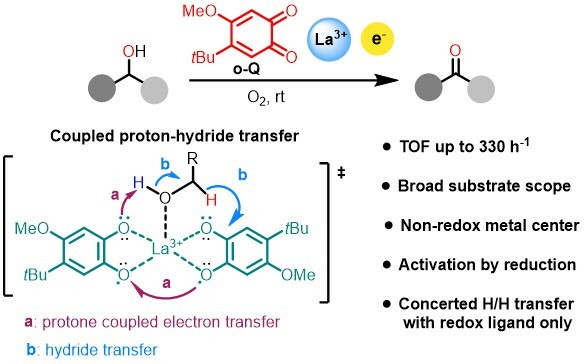 Nature has evolved powerful strategies in utilizing earth crust metals as catalytic centers in enzymes, but examples with a rare earth metal are rare. The first rare-earth metal enzyme, Ln-MDH was not reported until 2011. Herein we reported a La-semiquinone anionic radical complex as a highly efficient aerobic oxidation catalyst inspired by Ln-MDH.