Understanding chemical processes that occur in the solid-state is key to development of new materials. We report a method to visualise structural changes in photoactivated single crystals, using pump-multiprobe X-ray crystallography, where the processes occur on the millisecond-minute timescale.
Paul Raithby, Lauren Hatcher, Jonathan Skelton, Ben Coulson & Mark Warren
5 contributors
Like Liked by Evelina Satkevic and 2 others
0

Single-crystal X-ray crystallography has long been the established technique for determining the three-dimensional structure of highly crystalline materials. However, until the 1990s all the structural reports were of molecules and materials in their ground states, that is, as the starting materials of a reaction or the isolated reaction products. In the last decade of the 20th century, advances in synchrotron radiation facilities, developments in laser technology and cryogenics, and growth in computing power enabled scientists from the molecular and macromolecular communities to use crystallography to visualise photoactivation processes in single crystals by taking sequential snapshots of the transformations.1,2 The technique of “photocrystallography” was thus born.

Early highlights in macromolecular crystallography include the first reported nanosecond-resolved diffraction study investigating the photo-dissociation mechanism of carbon dioxide (CO) in carbon monoxy-myoglobin (MbCO).3,4 Photoactivation was shown to cause the CO group to dissociate from the metal centre and move away from its binding position. The data also revealed a region of positive electron density situated just below the heme centre, suggesting that the Fe atom moves out of the heme plane due to the breaking of the Fe-CO bond. A subsequent molecular photocrystallography experiment studied the photoactivation of crystals of [Rh2(dimen)4](PF6)2·CH3CN (dimen = 1,8-diisocyanomenthane) using a stroboscopic method at millisecond time-resolution at 23 K, with 335 nm laser pulses, and found a significant reduction in the Rh-Rh bond length of 0.86 Å.5

Following these pioneering experiments, a range of ground-breaking photocrystallographic experiments have been undertaken at synchrotron facilities around the world,6-10 with an emphasis on studying faster and faster photoactivation processes in part because of the availability of fast pulsed lasers. A perhaps unintended consequence of the pursuit of faster time resolution is that there are few methodologies suited to studying systems with lifetimes in the minutes to milliseconds range. This is despite the range of interesting physical and biological processes that occur on these timescales, including protein folding, ligand binding, phase transitions, crystal nucleation, X-ray induced crystal damage and photoactivated linkage isomerism.11

In our paper we present a new photocrystallography experiment that allows for complete single crystal X-ray diffraction datasets to be obtained with sub-second time-resolution. This method makes use of the latest developments in synchrotron sources, gated photon-counting detectors and pulsed LEDs to allow us to follow photoswitching on the minute to millisecond timescales in atomistic detail. Using a pulsed LED pump ensures uniform sample illumination and allows the pump-multiprobe timing sequences and the excitation pulse-width and intensity to be tuned to maximise photoexcitation and minimise crystal damage. We can also collect data faster than in existing pump-probe experiments, which is important for crystals that are sensitive to light and/or X-rays.

We have successfully tested the technique on the crystalline complex [Pd(Bu4dien)(NO2)][BPh4] (Bu4dien = N,N,N’,N”-tetrabutyldiethylenetriamine), which undergoes photoactivated NO2 → ONO linkage isomerism in the single crystal.12 We were able to measure the isomerisation kinetics at higher temperatures than are accessible in traditional photocrystallographic decay measurements, and to demonstrate that the same fundamental mechanism, with an activation energy EA of 61.7 kJ mol-1 and an attempt frequency A of 48.3 GHz, is active over a wide range of temperatures.

We were also able to visualise the changes in electron density upon excitation from the pump-multiprobe measurements through so-called “photo-difference” maps.  The results are shown in Figure 1, with the positive (green) and negative (red) residual peaks indicating regions where the electron density accumulates or depletes, indicating the movement of the atoms during isomerisation. This is a unique feature of our method and could be used to identify transient species present at low concentrations during photo-reactions, thereby providing important mechanistic information.

In summary, the new pump-multiprobe photocrystallography experiment described in this paper takes advantage of the second-to-millisecond timescales to enable a number of advantages over existing methods developed to study faster processes, including finer control over the pump-probe parameters and faster data collection, and has the potential to be applied to a wide range of processes in crystalline materials.

To read the full story, find our article in Nature Communications Chemistry: 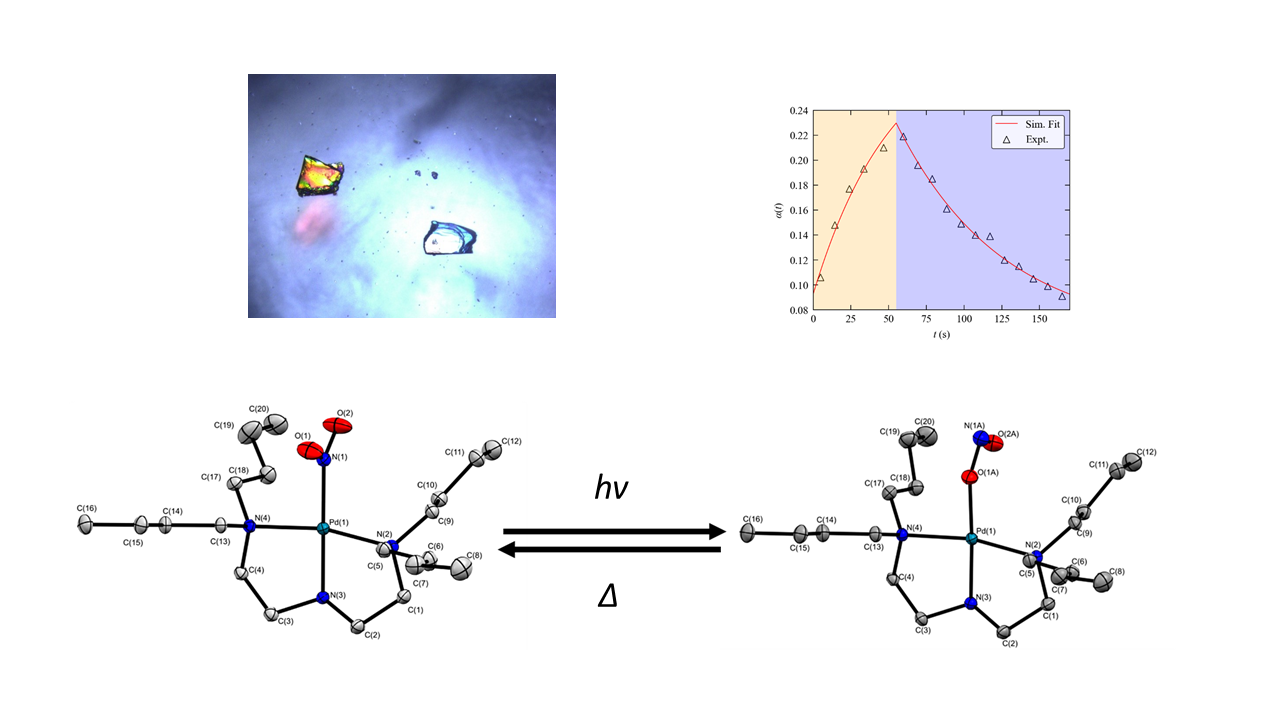 Understanding chemical processes that occur in the solid-state is key to development of new materials. We report a method to visualise structural changes in photoactivated single crystals, using pump-multiprobe X-ray crystallography, where the processes occur on the millisecond-minute timescale.