Let's plug in and stimulate networking!

An electrochemical pathway for coupling between polymers has been developed. Simply by plugging in mechanical pencil leads to an electronic power supply and applying only a voltage of 1.5 V, electrochemical topological transformation and chain extension of polyisloxanes can be achieved.

Advances in organic synthesis have led to the synthesis of a variety of polymers with non-linear topologies. As it became clear that the properties of nonlinear polymers differed greatly from those of linear congeners, researches aimed at exploiting the effects of polymer topology in the development of functional materials have emerged. Since transformation of polymer topologies requires organic reactions, the development of a simpler and greener approach is crucial for a sustainable future.

On the other hand, hexaarylimidazole (HABI) is a substance that exhibits phototriggered cleavage of a covalent bond between two imidazole rings to produce a pair of triphenylimidazolyl radicals (TPIRs). The chemistry of HABI has a long history. For example, in the photopolymerization process industrialized by DuPont, HABI has been used as a photoradical generator. In this process, TPIR generated by irradiating HABI with light reacts with chain transfer agents (CTAs) such as thiols, and the generated secondary radicals initiate the polymerization of vinyl monomers. On the other hand, in the absence of such a hydrogen donor that can act as a CTA, TPIR recombines with each other and returns to HABI. Since TPIR is a stable radical that can be handled even in air, the photoreaction of HABI can be regarded as a reversible coupling reaction that can be applied to various topological transformations.

Generally, HABI is synthesized by the conversion of 2,4,5-triphenylimidazole (lophine) to TPIR in the presence of a mild oxidant such as potassium ferricyanide, followed by spontaneous coupling between TPIRs (Fig. 1a). However, for lophine-appended polymers, the conversion of lophines into TPIRs by this method requires a large amount of solvents, oxidants, and bases.

In this study, we have achieved polymer–polymer coupling reactions based on electrochemical oxidation of lophine (Fig. 1a) and have been able to demonstrate electrochemical topological transformation (ETT) and electrochemical chain extension (ECE) of oligo(dimethylsiloxane) (ODMS) and poly(dimethylsiloxane) (PDMS) (Fig. 1b). Especially, by utilizing a silicone-soluble ionic liquid doubled as a solvent and supporting electrolyte, we achieved a one-step synthesis of network PDMS by ETT of a star-shaped PDMS with lophine end groups (Fig. 1b, middle).

In the course of this research, the first author of the article Ms. Minami Oka investigated the possibility of using various electrodes and found that mechanical pencil leads enable ETT of lophine-appended PDMSs. I was very impressed when she achieved ETT with a mechanical pencil lead and succeeded in the replacement of volatile organic solvents with non-volatile environmentally friendly ionic liquids which double as supporting electrolytes. But what surprised me the most was the moment when Minami succeeded in electrochemical oxidation of lophines using India ink, In the paper, we used a mechanical pencil lead as an electrode, which is more readily available to everyone, but in fact, these reactions can also be achieved using India ink. Actually, Minami is a “Shodo master” that we rarely meet. The “Shodo master” means like a “Jedi master” in the Star Wars films and the Shodo is an artistic creation of “characters” by using a special brush and India ink (Fig. 2).

Traditional black India ink contains graphite (like a mechanical pencil lead), which would make the written characters conductive. With that, she created characters “commun.” and “chem.” in black India ink on glass wools and each of these characters was connected to an electric power supply as shown in the Fig. 3. Upon applying potential, electrochemical oxidation reaction of lophine with “commun.” and “chem.” proceeded and we were able to visually recognize the pink colored solution, which demonstrates the production of TPIRs.

Of course, it is very easy to use mechanical pencil leads. In contrast, since the ink soaks into the glass wool, it is easy to increase the surface area involved in the electrochemical oxidation of lophines, and it is also worth mentioning that the shape of the electrode (the shape of the character) is highly flexible. An ongoing challenge in our group is the development of innovative materials fabricated with such an environmentally-benign electrochemical process. 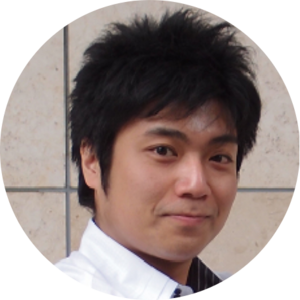 Prof., The University of Tokyo