Manganese(I) complexes with photophysical and photochemical properties reminiscent of those known from ruthenium(II) and iridium(III) compounds have been discovered.
Oliver S. Wenger
Professor, University of Basel
Follow

Manganese(i) is isoelectronic to iron(ii) but has typically been overlooked as a cheap Earth-abundant metal for the development of 3d6 metal-to-ligand charge transfer (MLCT) emitters and photosensitizers. Now, using chelating isocyanide ligands, air-stable manganese(i) complexes have been obtained t…

Luminescent metal complexes are most directly useable in light-emitting devices, but the occurrence of luminescence typically means that a metal complex has an excited state that is exploitable for other practical applications as well. For example, that excited state could facilitate chemical reactions, or it could trigger elementary processes in solar cells. There are many different types of excited states, and not all of them behave equally. In metal complexes, especially useful excited states result from the transition of an electron from the metal to its coordinated ligands, and those states are called metal-to-ligand charge transfer (MLCT) excited states. Luminescent MLCT states are fairly common among platinum group metals, for example for ruthenium(II) or iridium(III) compounds. Their d6 valence electron configuration is important to make sure that an MLCT is the lowest excited state, and not some other, non-luminescent state. Because ruthenium and iridium are very precious and rare, it would be attractive to obtain luminescent MLCT states with iron(II) complexes, which have an analogous d6 electron configuration. Researchers have tried to accomplish this for several decades, but these attempts failed until now1.

Manganese instead of iron

We did not see how we would be able to solve a problem that other, more experienced scientists had not been able to master during the past twenty years. We did not even try. Instead, we focused on manganese(I), which is isoelectronic to iron(II), and for which we saw the chance of obtaining an MLCT state that could be exploitable for light-emitting devices, catalysis and solar cells. Manganese is 900,000 times more abundant in Earth’s crust than iridium, far cheaper, and not toxic in many forms2.

The lower oxidation state of manganese (I) compared to iron(II) calls for a radically different ligand design, off the well-beaten paths of polypyridines and carbenes. Early work by two giants of inorganic chemistry and photochemistry, Harry B. Gray and George S. Hammond, demonstrated that isocyanide ligands give access to manganese(I) complexes with interesting photophysical properties though they did not report luminescent MLCT states3. Forty years later, Laura A. Büldt in our group obtained a luminescent MLCT state in a molybdenum(0) complex, using a special type of newly designed isocyanide ligand4. The key was to make the ligands bidentate, such that they can hold the metal like the claw of a lobster, and at the same time to make the ligands relatively stiff, such that they cannot vibrate too much.

Patrick Herr spent four years of his Ph. D. life trying to make manganese(I) isocyanide complexes glow. Along with postdoc Christopher B. Larsen, he quickly discovered that the basic project idea, now relying on bidentate and tridentate isocyanide ligands (see Figure above), works. In the second phase of the endeavor, postdoc Christoph Kerzig gave much valuable input and Professor Daniel Häussinger was delighted to perform NMR experiments on a metal nucleus that was new to him. Teamwork was pivotal for the overall success; each of the involved individuals alone would not have gotten very far in this project.

The outcome, the future

Our work demonstrates that manganese(I) complexes with isocyanide chelate ligands have luminescent MLCT excited states with very similar photochemical behavior as well-known ruthenium(II) and iridium(III) complexes. We see this as an important fundamental discovery. At the same time, it is obvious that manganese cannot immediately replace precious metals in photophysical and photochemical applications. Very likely, it will never be able to do so fully, though research on photoactive complexes with Earth-abundant metals holds great promise for the future. Currently, several very talented Ph. D. students and postdocs in our group work on the next generation of designer luminophores and photocatalysts made from first-row transition metals. 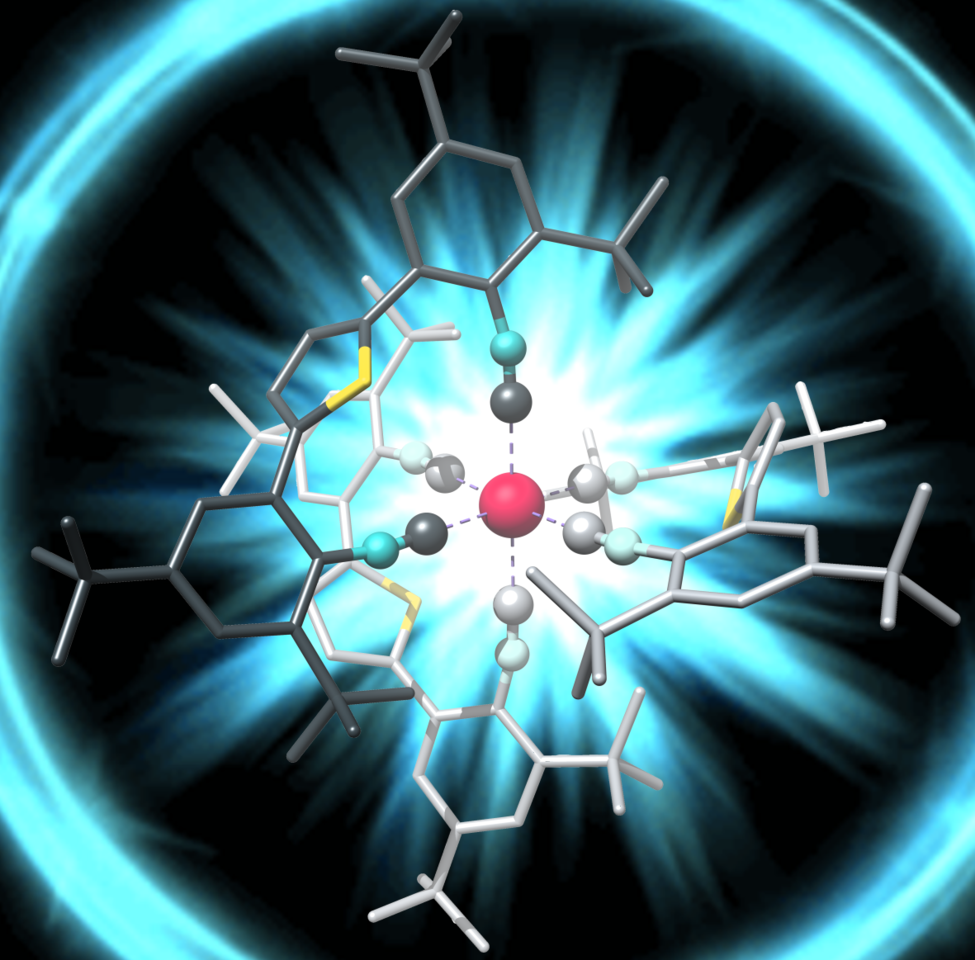 Manganese(I) complexes with photophysical and photochemical properties reminiscent of those known from ruthenium(II) and iridium(III) compounds have been discovered.