Tuning the structures of subnanometric metal clusters is challenging but can unlock unexpected catalytic properties. Here, the authors show that changing the composition of MFI zeolite-encapsulated PtSn subnanometric clusters by adding just a few tin atoms can lead to a remarkable stability enhancem…

There are cases in heterogeneous catalysis that even if the starting catalyst is formed by isolated metal atoms, the operating catalyst involves metal clusters and more specifically subnanometric metal clusters. This is not surprising since the highly flexible geometric and unique electronic structures of mono and bimetallic clusters can deliver unique catalytic properties. When this occurs, molecular modeling can simulate the reactivity of those entities and guide towards the design of an improved catalytic active site. Unfortunately, subnanometric metal clusters are not as robust as supported metal nanoparticles and they tend to agglomerate, especially under demanding reaction conditions.

Some years ago, we started a program to generate stable subnanometric clusters. Working with Pt in chabazite (CHA), we were able to generate single Pt atoms, subnanometric Pt clusters, or 1-1.5nm nanoparticles within the cavities of the zeolite1. However, the Pt single atoms and clusters agglomerate when working at high temperature under reducing atmospheres. It is clear that from a catalytic point of view what is relevant is not the starting material, but the catalyst at work. Therefore, we have to synthesize subnanometric Pt clusters that will remain stable under operating conditions. Then, in his PhD, Lichen Liu, did an excellent work and a zeolite synthesis method was developed that allows to generate subnanometric Pt clusters (0.5-0.6nm), within the sinusoidal channels of the MFI zeolite, and the pore confined Pt clusters remain stable against sintering at temperatures as high as 600ºC in H2. The size and stability of these subnanometric Pt particles showed high activity and extraordinary stability during the catalytic dehydrogenation of propane to propene2. It is well known that the catalytic behavior of metal catalysts can be strongly influenced by the introduction of a second interacting metal; being this specially so when dealing with clusters formed by a few atoms. Then the next challenge was to synthesize uniform subnanometric bimetallic nanoparticles, with a well-defined and stable structure. The system studied was Pt-Sn and migration of the two metals to form the bimetallic nanoclusters in the sinusoidal channels in MFI zeolite, could be achieved by combining a one pot metal-zeolite synthesis with post synthesis treatments to mobilize Sn atoms. By doing that, the adequate intimacy between Pt and Sn is achieved and excellent activity, selectivity and catalysts life is achieved during dehydrogenation of propane to propene.

Structural evolution of K-PtSn@MFI during the reduction treatment with H2. (a) In the pristine K-PtSn@MFI sample, both Pt and Sn exist as atomically dispersed species in the sinusoidal channels of MFI zeolite. (b) After reduction by H2 at 400 oC, Pt single atoms will be reduced and form subnanometric Pt clusters while only a few of the Sn(IV) species will be reduced. (c) When the temperature is increased to 600 oC, most of the Sn(IV) species are reduced to Sn(II), but those reduced Sn species mainly remain separated from Pt clusters. (d) After being kept in H2 flow for long time (≥12 h), part of the reduced Sn species migrates to Pt clusters and bimetallic PtSn clusters with reduced Sn species interacting with the external surface of Pt clusters are formed in the sinusoidal 10R channels of MFI zeolite. It should be noted that, due to the complexity of the structures of PtSn clusters, the models proposed in this figure could be over simplified. PtSn clusters with different structures could exist in the working catalyst, as indicated by the CO-IR spectra.

To identify the bimetallic species formed and stabilized within the pores of the zeolite, we have combined EXAFS, quasi in situ STEM combined with advanced image analysis, and CO-IR spectroscopy. From the results obtained with the above techniques, we have concluded that the bimetallic subnanometric clusters located regioselectively in the MFI zeolite consist of less than 15 Pt atoms with 2-3 Sn atoms located to their external surface through Pt-O-Sn-O-Si bonding. We note that the geometric and electronic features of these PtSn bimetallic clusters are not common in the most conventional PtSn bimetallic nanoparticulated catalysts. This work shows that by combining advanced synthesis methods with multiple in situ characterization techniques (both averaged techniques like XAFS and site-specific techniques like IR

and TEM), together with molecular modeling (work in progress), is key to produce and understand the nature of the catalytic active sites and to design better catalysts. In other words, “Understanding for designing and designing for applications”3. 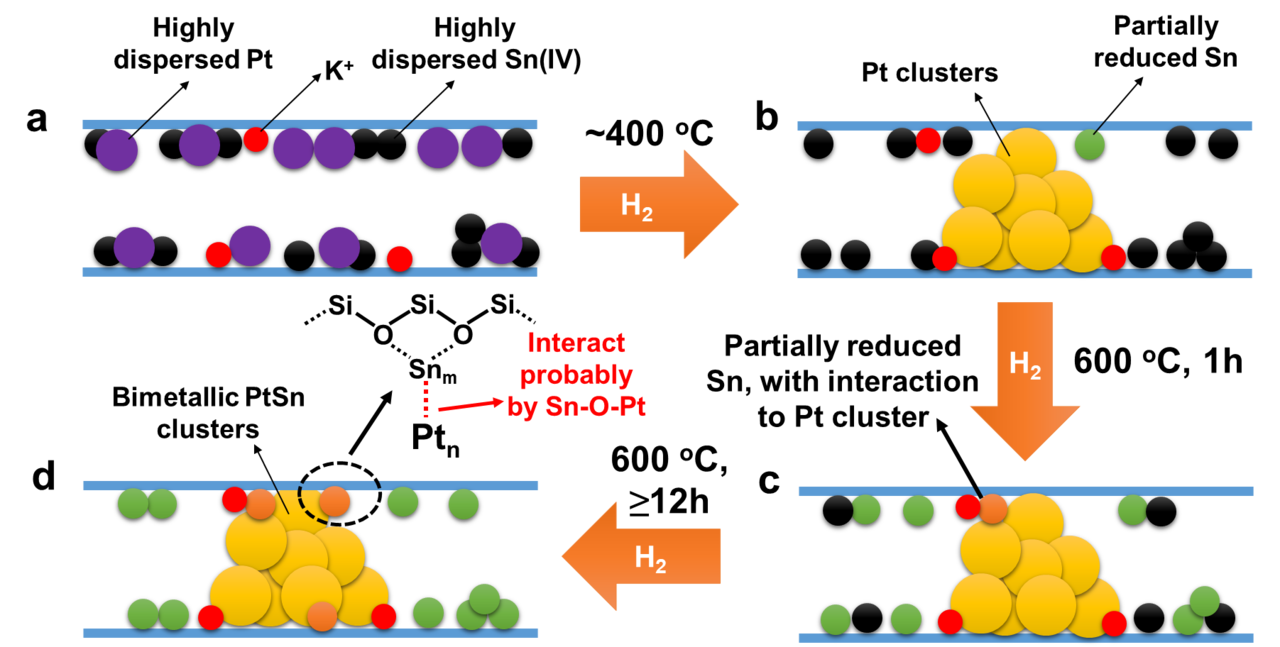