In the current research published in Nature Catalysis, we have sought to fine-tune the photosensitization properties of pyrene by its incorporation into the skeleton of a homo[2]catenane, thereby increasing its photocatalytic efficiency.
Amine Garci and Fraser Stoddart
2 contributors
Like Liked by Evelina Satkevic and 4 others
0

Although pyrene-containing molecules have been studied for their optical properties, the outcome of their incorporation into mechanically interlocked structures remains underexplored. Here, the authors install pyrene units into homo[2]catenanes and investigate the formation of long-lived triplet sta…

Metal-based photocatalysts such as ruthenium and iridium polypyridyl complexes have dominated the molecular photocatalysis field for the past century on account of their favorable photophysical properties that promote electron-transfer catalysis. Recently, the development of metal-free, organic photocatalysts has started to provide sustainable alternatives to these compounds. Research in this area is mainly devoted to enhancing the photosensitization properties of these new organic photosensitizers by populating their triplet excited states, a phenomenon that is key to increasing photocatalytic efficiencies.

In the current research published in Nature Catalysis, we have sought to fine-tune the photosensitization properties of pyrene by its incorporation into the skeleton of a homo[2]catenane, thereby increasing its photocatalytic efficiency.

The research has entailed two fundamental parts: (i) the design and synthesis of the three constitutionally isomeric pyrene-based homo[2]catenanes and (ii) the investigation of their photosensitization properties and photocatalytic activities.

In our attempts to generalize this approach, we anticipated that pyrene could be used as precursor for the formation of the homo[2]catenane on account of its strong [p···p] stacking compared to the situation with anthracene.

Three routes of investigation were launched simultaneously—namely, theoretical calculations, a transient absorption study for triplet-state dynamics, and photocatalysis experiments. Transient absorption (TA) data (recorded in collaboration with the Wasielewski group at Northwestern) revealed that all the compounds generate significant triplet populations. Additionally, based on the TD-DFT data, we have devised a general mechanism for enhancing the efficiency of the triplet-state population through the formation of a mechanical bond. These promising photosensitization properties were reflected in the observed photocatalytic activities of this class of mechanically interlocked molecules, demonstrated by the model of detoxification of the sulfur mustard simulant CEES. In addition, by incorporating pyrene units into the pyridinium-based cyclophanes and homo[2]catenanes, we were able to improve (i) the rate of the reaction from 2 hours (using unfunctionalized pyrene) to less than 5 minutes and (ii) the conversion yield of CEES to 2-chloroethyl sulfoxide (CEESO) from 75% to >95%.

This finding highlights the role of the mechanical bond in bringing the photosensitizers into close contact, enhancing the singlet oxygen generation and leading to better photocatalysts.

Overall, this investigation highlights the benefits of using the mechanical bond to fine-tune the energy landscape of common aromatic chromophores and the development of new classes of chromophores based on mechanically interlocked molecules for use as photosensitizers and photocatalysts. 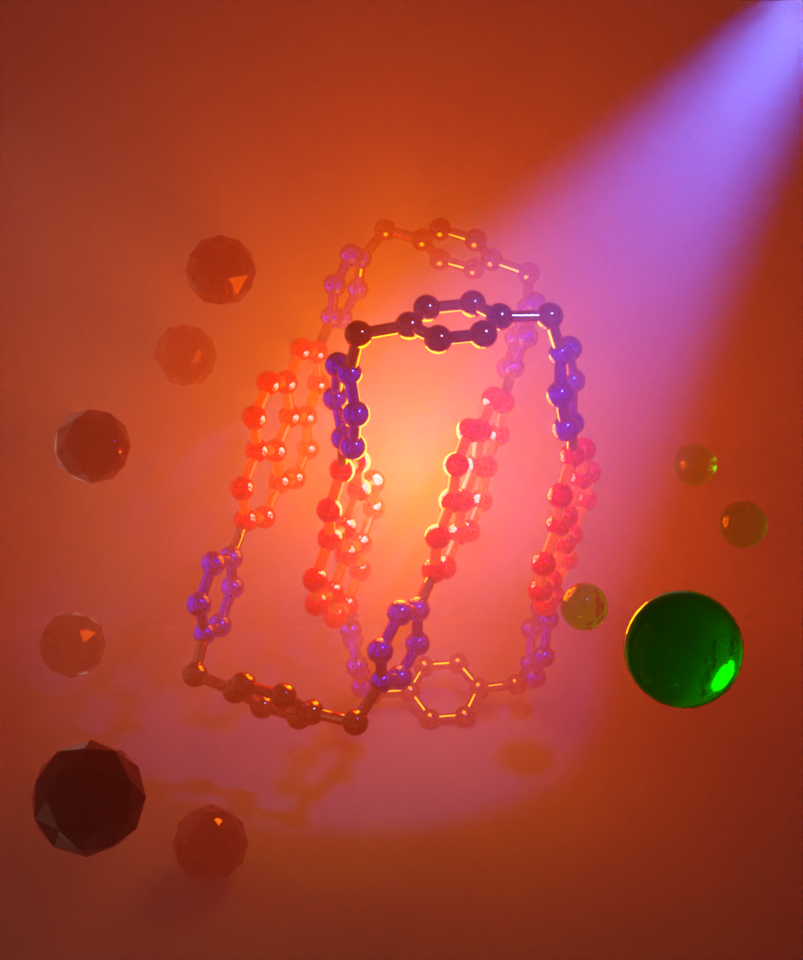 In the current research published in Nature Catalysis, we have sought to fine-tune the photosensitization properties of pyrene by its incorporation into the skeleton of a homo[2]catenane, thereby increasing its photocatalytic efficiency.