The Suzuki-Miyaura reaction is widely used across industry and academia (Fig. 1a). The development of asymmetric variants of this valuable cross-coupling method is an active area of investigation within the organic chemistry community.1 In 2015, the Fletcher group published our first rhodium-catalysed asymmetric Suzuki-Miyaura type coupling of racemic halides with arylboronic acids (Fig. 1b).2 Since then, our group has continued to expand this rhodium-catalysed allylic arylation.2-5 The coupling of biologically relevant heterocycles can be achieved, and we have applied this method to the synthesis of several natural products and drugs (Fig. 1b).3,6 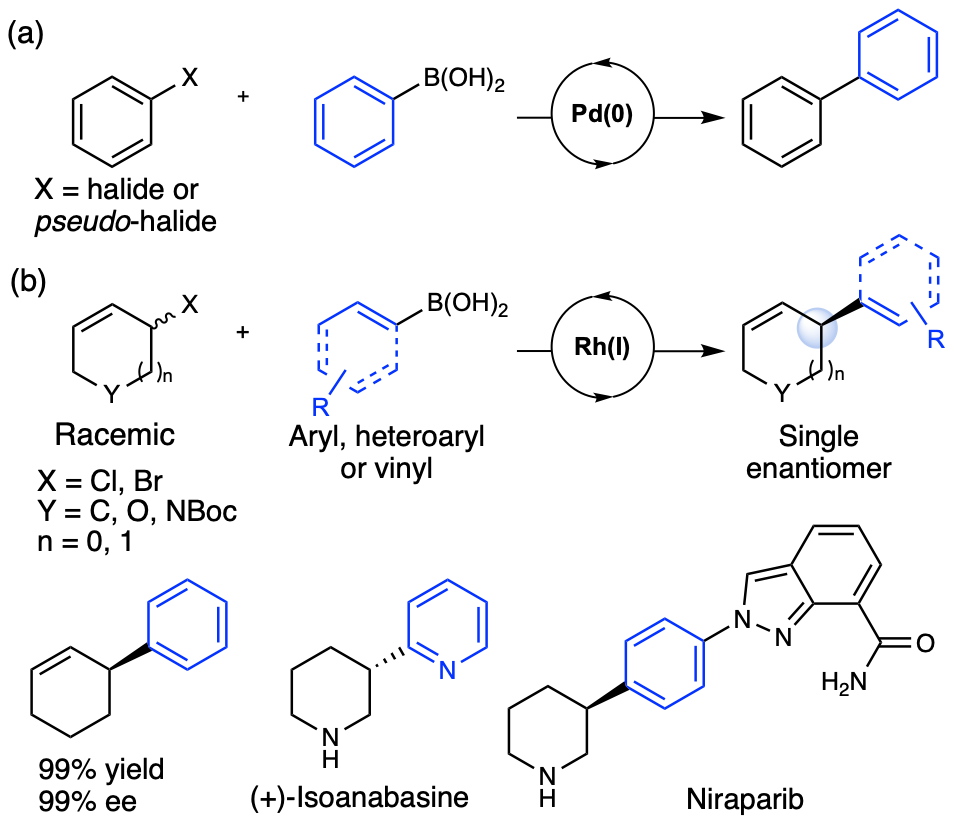 However, our understanding of the mechanism of this transformation was limited and lacked experimental or computational support. We wanted to understand the mechanism enabling this highly enantioselective transformation, and thus we launched this mechanistic project over three years ago (article available at https://dx.doi.org/10.1038/s41929-021-00589-y).

Preliminary experimental studies revealed that the active catalytic species is monomeric in rhodium and chiral bisphosphine ligand. NMR studies showed transmetalation from boron to rhodium is likely the first step in the catalytic cycle. However, we quickly ran into difficulty attempting to further analyse this reaction by in situ NMR and realised that other techniques would need to be employed.

We decided to probe the reaction using a method developed by Singleton to study the natural abundance 12C/13C ratios. Fortunately, there is a brilliant NMR team at the University of Oxford led by Prof. Tim Claridge. Prof. Claridge determined the 12C/13C ratios generated in the arylated product when the reaction is quenched at low conversion. We found an enrichment in 12C at the ipso-carbon of the phenyl ring and also at two positions in the allyl unit. For a multistep mechanism like ours, the enrichment at a particular carbon is due to the first irreversible step with which that part of the molecule is involved. For the ipso-carbon of the phenyl ring, that step is transmetalation. Thus, this experiment reveals that transmetalation is irreversible. However, we were struggling to interpret the enrichment at two different positions in the allyl unit. Prof. Robert Paton is an expert in computational chemistry at Colorado State University with whom the Fletcher group has previously enjoyed much successful collaboration. With his insightful contributions, we were able to calculate the predicted 13C kinetic isotope effect resulting from a series of plausible mechanisms. We found that the observed enrichment was due to oxidative addition of both enantiomers of the racemic substrate at different rates. By applying this useful technique, we learnt about the transmetalation and oxidative addition steps in our catalytic cycle and also facilitated a relationship between the experimental evidence and computational results.

Density functional theory calculations supported irreversible transmetalation and showed that a common pseudo-symmetrical η3 Rh–complex is formed by irreversible oxidative addition of Rh–aryl intermediates to both enantiomers of the racemic substrates (Fig. 2). The stereochemistry of the product is set in the reductive elimination step. Figure 2. A simplified catalytic cycle showing the proposed mechanism in this work with key steps including transmetalation, oxidative addition and reductive elimination.

Further insights were gained by examining the reaction with alternative electrophilic coupling partners such as heterocyclic, configurationally stable, deuterium labelled and diastereomeric allyl chlorides. We found that changing the ligand or substrate used in this transformation has implications for the mechanism. Although the key steps in the catalytic cyclic are likely the same with the alternative coupling partners and ligands examined, it is interesting to note the mechanistic discrepancies observed. Oxidative addition can occur via a syn- or anti-pathway with the selectivity under substrate steric control. In diastereoselective cross-coupling examples, the diastereoselectivity is determined in this oxidative addition step, while the absolute stereochemistry of the product is set in the reductive elimination step.

After our initial submission to Nature Catalysis, a reviewer requested that we provide kinetic data to support our proposed mechanism. This peer review interaction encouraged us to investigate the reaction kinetics of the rhodium catalysed addition of (4-fluoro-3-methylphenyl)boronic acid to cyclohexenyl allyl chloride under a range of conditions. We found that, as expected, the reaction proceeds with first order dependence on the total rhodium concentration. However, the relationships with boronic acid and allyl chloride revealed more complex kinetic behaviour. At this point, we reached out to Prof. Guy Lloyd-Jones at the University of Edinburgh who generously gave our mechanistic study a lot of consideration. After much engaging discussion, he expertly guided the interpretation of our experimental kinetic data through derivation of a pseudo-steady state rate equation based on our mechanistic proposal. Apparent orders in cyclohexenyl chloride and arylboronate evolve between limits of pseudo zero-order to first-order as the reactions proceed. The speciation of rhodium also evolves as the reactions proceed, with no resting state dominant throughout. Overall, this kinetic study supports our proposed mechanism as the experimental datasets obtained can be satisfactorily simulated using a kinetic model based on the key mechanistic features of our proposed catalytic cycle (Fig. 2).

A variety of techniques, both theoretical and experimental, were employed in this multifaceted study to elucidate the mechanism of this rhodium-catalysed allylic arylation of racemic halides with arylboronic acids. We anticipate that this study will contribute towards the wider understanding of rhodium-catalysed asymmetric allylic addition reactions and asymmetric chemistry with racemic substrates in general.

As described in this post, piecing together this mechanistic puzzle was a highly collaborative effort and we hope that telling the story behind this paper helps to highlight the benefits of collaboration within the scientific community. 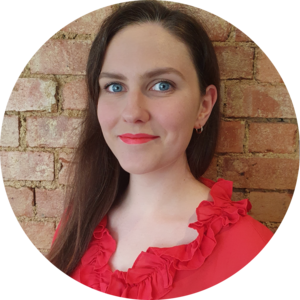