Dibenzocyclooctadiene (DBCOD) lignans are complex natural products isolated from medicinal plants of the Schisandraceae family. For many years, extracts of these plants have been used throughout Eastern Europe and Asia for their wide-ranging health benefits, which have included anti-viral activity, anti-oxidant activity and perhaps most importantly, hepatoprotection. With the increased use of pharmaceuticals throughout much of Asia, interest has grown in small-molecules that can alleviate drug-induced liver-toxicity, and in this regard, preliminary clinical trials using extracts from S. chinensis and S. sphenanthera have shown promising results.

While many DBCODs have been known since the early 1970s, the most complex members, which we call “Stage 3 DBCODs” in our work, have not been previously synthesized. Stage 3 members contain a very high oxygen content embedded within intricate, polycyclic structures (Figure 1a). This is perhaps best exemplified by the taiwankadsurins and kadsuphilin N, which comprise uniquely bridged rings systems surrounding an 8-membered carbocyclic core. Their complexity, coupled with their poor availability from natural sources, has limited detailed biological studies, and little is known about how these natural products exert their beneficial effects. 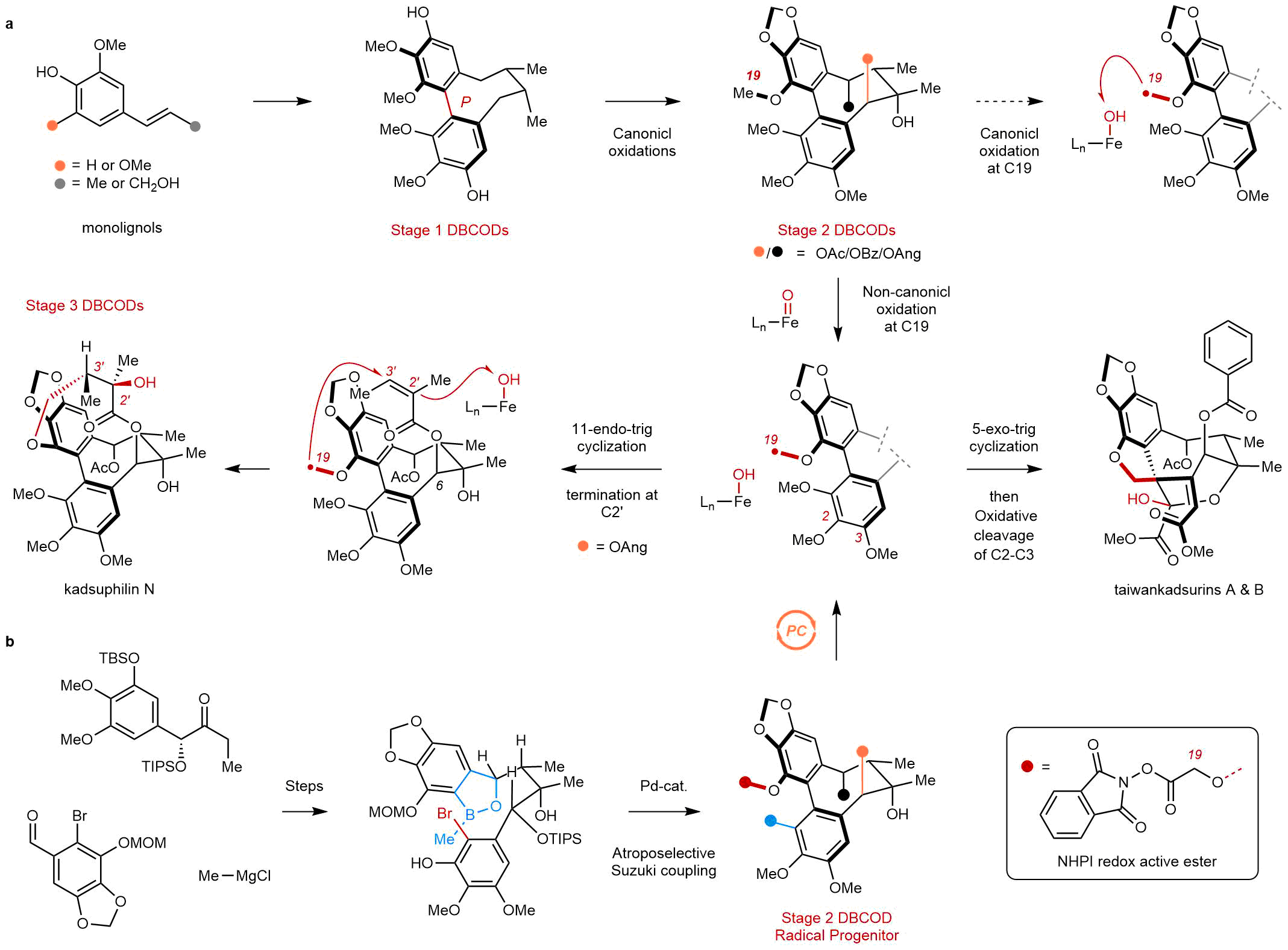 Biosynthetically, DBCODs are products of an oxidative pathway that transforms relatively simple phenyl propane units into increasingly intricate structures (Figure 1a). The pathway includes Stage 1 members that possess the characteristic 8-membered ring of the family in a fully saturated form. Stage 2 members are then generated by sequential C-H oxygenations around this core that install benzylic esters and a 3o alcohol. While little is known about the orchestration of these oxidations, they are most likely performed by iron oxygenases, following a canonical mechanism of C-H abstraction and rebound. This is the most common mechanism of cytochrome P450s and non-heme oxygenases, and involves the recombination of a substrate-centered radical and the enzyme’s Fe-(III)-OH. Rebound is typically very fast, and occurs with rate constants between 107 to 1011 s-1.

To arrive at Stage 3 DBCODs, an unusual, non-canonical C-H oxidation must take place, in which intermediate substrate-centered radicals isomerize prior to rebound. In the DBCODs, this isomerization involves a transannular radical cyclization that generates the 11-membered marcolactone of kadsuphilin N, or a 5-membered spirocyclization that breaks aromaticity to produce the taiwankadsurins. Under normal circumstances, these radical cyclizations would be much slower than rebound, raising questions about how the associated enzymes avoid canonical hydroxylation in order to promote these challenging C-C bond formations. Relatively little is known about noncanonical enzymes and their unique mechanisms for C-H oxidation, and by comparison to their canonical cousins, relatively few conditions exist for their mimicry in the lab.

In order to explore the chemistry and biochemistry of Stage 3 DBCODs, we designed a strategy to mimic their characteristic non-canonical biosynthesis that hinged on late-stage radical cyclizations (Figure 1b). The use of radicals in complex molecule synthesis has seen a resurgence in recent years, owing to the ever-expanding toolbox of chemoselective reaction conditions. In our case, we benefited immensely from modern photocatalytic tools in order to generate the hypothetical biosynthetic radicals. We then watched as they selected between downstream transformations, including the 5- and 11-membered ring cyclizations that ultimately led to the Stage 3 targets. Despite their complexity, we could perform these cyclizations on good scales and in high yields, leading to hundreds of milligrams of some family members.

Before arriving at the key, photocatalytic step, we needed to develop an asymmetric and scalable route to the Stage 2 DBCOD framework that would afford us the flexibility to access multiple Stage 3 members (Figure 1b). To do so, we developed an atroposelective, Pd-catalyzed cyclization to install the key 8-membered ring that forms the tetra-ortho-substituted biaryl bond with very high diastereocontrol. Given the well-known difficulties of forming biaryl bonds stereoselectively, we think that the lessons learned from our optimization studies could be more broadly useful in other synthetic contexts. Here, it provided multiple grams of Stage 2 DBCODs that could sustain our late-stage discovery efforts.

We hope that our work will call attention to the fascinating chemistry of these natural products, and that it will help to unravel the mechanisms by which they exert their beneficial biological effects. We also hope that our work will inspire complementary efforts to capitalize on Nature’s biosynthetic blueprint, and explore non-canonical branches of oxidative metabolism. More details of this work can be found at https://www.nature.com/articles/s41557-020-00603-z. 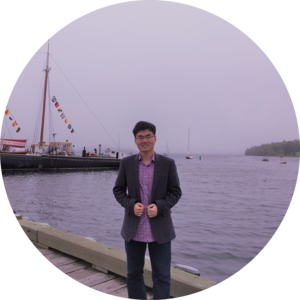