The term ‘serendipitous discovery’ is used to describe discoveries in science that occur at the intersection of chance and wisdom, and it would exactly define my discovery of the unique interactions of surface acoustic waves (SAWs) with crystalline materials—a discovery that is likely to influence my career path from this point onwards. During my work in the Micro/Nanophysics Research Laboratory, we had tinkered with the idea that MHz-order frequency electromechanical waves in the form of SAWs—electromechanical waves that propagate on a piezoelectric substrate (lithium niobate, LiNbO3)—could be utilised for fast crystallisation of a wide array of materials. Given our prior knowledge that the acoustic streaming (bulk flow) in liquids induced by the SAW could induce rapid microcentrifugation and micromixing, the wisdom behind the idea stemmed from the fact that the transmission of these waves into a sessile liquid drop placed atop the substrate results in a fast-turbulent convective flow that overcomes the usual diffusion mass transfer limitations within the solution. This resulted in areas of supersaturation of the solute in the drop, driving the nucleation of crystals and enhancing their subsequent growth.

We have chosen a class of promising highly porous materials known as metal–organic frameworks (MOFs), which have sparked significant interest of late due to their potential to revolutionise a wide range of applications from catalysis and gas separation to charge transport and storage. For example, the use of MOFs for gas separation is particularly attractive, owing to their uniform and tunable pore sizes, and chemical modularity. Nevertheless, in this and other applications, the adhesion, availability of free pores, crystallinity, and orientation control of MOF films are challenging and have limited their practical implementation to date.

In our work which was published in Nature Communications, we had set off to demonstrate a fast, one-step method for the synthesis of MOFs. As predicted, the exposure of MOF precursor solutions to the microcentrifugation flow led to the nucleation and subsequent crystallisation of the MOFs within just 5 minutes. We had demonstrated this for both a copper-based (HKUST-1) and iron-based (MIL88-B) MOF although we expect the technique to be applicable for other types of MOFs.

What came as a surprise to us though was that the MOF films that formed on the surface of the piezoelectric substrate along which the SAW propagated were unexpectedly oriented. More specifically, we observed vertical stacking of successive monolayers with a high degree of out-of-plane orientation parallel to the vertical {222} crystal plane that curiously appeared to increase with increasing SAW power. In many ways, this was baffling to us as to why this would occur since the SAW wavelengths (typically hundreds of microns at the 10 MHz resonant frequency we employ) are many orders of magnitude larger than typical molecular length scales. In other words, the observation would be akin to driving a freight train into a random pile of bricks only to have them stack neatly in the process. The light bulb moment came nevertheless when we replaced the Rayleigh SAW (transverse, i.e., out-of-plane, polarised surface compressional wave) we had used with a shear horizontal SAW (horizontal, i.e., in-plane, polarised surface compressional wave), only to find that the MOF crystals now possessed an in-plane orientation along the {200} crystal plane. Given the nature of the electromechanical wave and since the vast lengthscale discrepancy means that it is unlikely that the mechanical component would play a role in the molecular orientation, we postulated the culprit to lie with the electrical component of the SAW giving rise to induced dipole formation of the solute molecules along the gradient of the electric field corresponding to the wave polarisation plane that, in turn, leads to their ordering.

A second unexpected finding was that the MOF films which we had synthesized were not only freestanding, therefore circumventing the need for additional processes to detach them from the surface of the piezoelectric substrate, but also simultaneously activated. In other words, the pores of the MOFs were ‘free’ of solvent and readily available for interaction with guest molecules in whichever application they are to be used. This, therefore, negates the need for subsequent activation processes involving solvent exchange, which are typically required in most, if not all, other MOF synthesis methods and which can have a large environmental impact.

So, where did we go from here? The versatility of this unique SAW MOF synthesis platform appeared to also allow us to control multiple properties of the crystals such as their thickness, size, crystal structure, and pore size. In follow-up work (Nanoscale Horizon, 2020,5, 1050-1057), we showed that by turning up the SAW power further such that the MOF precursor solution was drawn into a thin hydrodynamic film and subsequently nebulised to effect faster crystallisation in the film, unique monoclinic structures (P21/n) and ‘swordlike’ morphologies of the MOF crystals were formed in place of the cubic morphology that is typically obtained with the conventional solvothermal synthesis as well as the aforementioned SAW microcentrifugation synthesis method. Not only was the aspect ratio of the swordlike morphology tunable with the input SAW parameters, but we also found that the unique one-dimensional geometry afforded far greater exposure of the metal nodes of the MOF along the crystal surface as opposed to being typically embedded deep within the three-dimensional structure of the cubic crystal. An upshot of the active site exposure is an enhancement on the conductivity of the MOF, which we showed to be approximately two orders of magnitude higher than their cubic counterpart.

We believe we have only scratched the surface when it comes to utilising high-frequency SAWs for manipulating and synthesising crystalline materials. Indeed, we have found similarly unique and equally puzzling observations in a host of other crystals, including 2D materials. As such, we have only begun in our quest to uncover and elucidate the fundamental mechanisms responsible for the myriad of phenomena we observe in addition to unlocking the potential of the platform for a wide range of applications.

More details of this work can be found here: “Acoustomicrofluidic assembly of oriented and simultaneously activated metal–organic frameworks” in Nature Communications, https://www.nature.com/articles/s41467-019-10173-5. 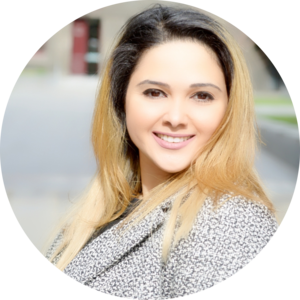