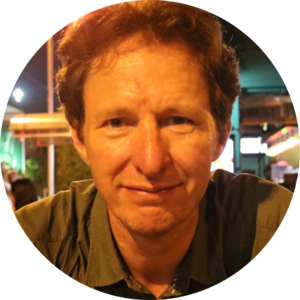 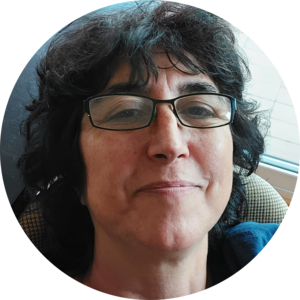 Natural systems that exhibit the directional movement of molecular machines are multicomponent and function in a liquid containing many ingredients. The molecular motors, whose fuel is chemical, are held tightly to a self-assembled fibre.

We sought to emulate this kind of molecular machine in a minimalist way in a liquid environment, as nature does. Most examples of controlled translational motion in synthetic molecular machines employ surfaces or chemical reactions in sequence.1,2 Controlling motion along a supramolecular path in synthetic systems is an enormous challenge. This work shows steps in this direction.

Firstly, a system is required where the travelling molecule is held tightly to the self-assembled path. Gel fibres had been prepared that showed remarkably smooth and regular structures,3 and these were in fact the starting point for our system. We knew we could modify the gel structure by changing the ratio of water and ethanol in the liquid in which the fibres form.  We also knew we could hold porphyrin molecules within the fibres using electrostatic interactions4 – the gelator molecule is a dication and the porphyrin a tetracarboxylate (Figure 1).  So, we have a path and a potential traveller, but photoexciting the system gives no appreciable dynamic response.

Secondly, then, we need something that will provide some mechanical disturbance to the system, to allow the traveller to dislodge and move. For that, we chose a familiar photoswitch, an azobenzene, and we used a carboxylate derivative so that the porphyrin and the traveller could be co-located on the path.  The gel-based system is made by simply mixing the components in ethanol or water and allowing the combined solution to stand for a few seconds.

Third, we need a tool to stimulate movement and see what is going on in this immobilised liquid system using light. We were lucky enough to have Total Internal Reflection Fluorescence (TIRF) microscopy available to us, and it turned out this acted as energy source and observational tool.

When the mixture with equal amounts of ethanol and water is made, thick fibres form with the porphyrin and azobenzene incorporated. Irradiation of the system leads to isomerisation of the switch, there is a supramolecular structural change and a resulting movement of the fluorophore over micron-scale distances.  That movement is seen in real time videos of the system in the microscope, and can be analysed by measuring the relative intensity of fluorescence in the fibres. Furthermore, a difference map of intensity shows how the porphyrins move away from the irradiated area into the surrounding fibres (Figure 2). The distance equivalent that the travellers move at a human scale would be up to around 10 km.

Changing the solvent composition leads to fascinating effects, where movement again takes place, but, for example, in the case of a 6:4 ratio of water to ethanol leads to the formation of separated fibres and rings incorporating the porphyrins (Figure 3).

Importantly, the porphyrin is not simply expulsed from the fibres in any of the solvent systems tried – it moves along them. If it were ejected from the fibres, it would be seen as a haze in the TIRF images.

The mechanism by which movement is encouraged is believed to be a result of both local photothermal warming and mechanical disruption of the gel fibres caused by the isomerisation of the azobenzene switch. If the enriched cis isomer of the switch is used, movement is much faster, supporting this hypothesis.

Others have compared the challenges of making molecular machines operate in liquids as to trying to get them to “swim in molasses and walk in a hurricane”5 or to function in a “Brownian storm”.6 These excellent analogies recognise the irrelevance of momentum and inertia in liquid systems. The question, arises, then, in the present case how and why do the molecules travel so far and so fast (in a few seconds). Clearly, they are held to the fibrous paths, and the molecular switch is essential to the movement, perhaps disturbing the localisation of the porphyrin in a stable position once dislodged. We are presently carrying out experiments to understand fully how this motion can occur and can be exploited.

In any case, we believe strongly that this work opens the doors to simple systems where machine-type motion and function can be performed without the need for long syntheses, where carefully chosen components can be brought together electrostatically to generate complicated mixtures that display remarkable behaviour.

Purely from a gel perspective, it is interesting to see that the molecules can act as pathways to mobile ions, in this case observed as a photoexcited thermally-induced movement. We believe the work opens massive possibilities to explore the effect of solvent composition, nature of the chemical switch and ion motion in these soft materials. The discovery might eventually lead to new insight into energy storage, drug delivery and advanced molecular machines7 inspired in these observations.