Polymer-guided self-assembly of metallic nanoparticles (NPs) is an effective approach for structuring matter at the nanoscale. So far, the strategy to align NPs consists in decorating copolymer lamellae. We report that peptidic homopolymers can also lead to 2D lamellar organization of NPs.
Colin Bonduelle
CNRS researcher, University of Bordeaux (LCPO)
Follow
Like

Precise organization of nanoparticles and polymers for the design of hybrid materials remains a challenging task. Here, the authors show a convenient way to organize nanoobjects by preorganization of inorganic particles in presence of a functional peptidic homopolymer.

Structuring hybrid materials combining metallic nanoparticles (NPs) and polymers has stimulated a large effort to make new physical properties emerging: optical, electronic or magnetic. Such composites have the potential of improving the functionality of devices ranging from memory storage to sensors or microelectronic systems. In addition, the structural properties of the polymer matrix can give added value to the hybrid materials, such as stimuli-responsiveness or chirality. Among a variety of possible structuring, disposing NPs in lines on substrates paves a way towards anisotropic ordering of matter at the nanoscale, which can be observed, manipulated and connected. To reach such a supraparticular organization, the most efficient strategy developed so far consists in decorating diblock copolymer lamellar assemblies by NPs, tuning the strength and the nature of weak interactions between the two components (essentially Van de Waals interactions). Here, an approach that goes beyond such a concept succeeds in obtaining lamellar assemblies in solution using functionalized homopolymers.

This collaborative work, initiated by two CNRS researchers in France, Simon Tricard (LPCNO, University of Toulouse) and Colin Bonduelle (LCPO, University of Bordeaux) have involved new self-assemblies of ultra-small platinum nanoparticles by binding them to polypeptide polymers. The NPs were synthesized by decomposition of Pt2(dba)3 (dba = dibenzylideneacetone) under a CO atmosphere in THF, followed by complete elimination of the organic dba residue by washing with pentane. TEM pictures showed well-dispersed NPs, with diameters of 1.2 nm ± 0.3 nm (Fig. 1a). On another hand, the polypeptide polymer (PBLG) was synthesized by initiating the ring-opening polymerization of γ-benzyl-L-glutamate-N-carboxyanhydride with propargylamine in dimethylformamide. A library of PBLGs spanning a wide range of molecular weights were obtained and their αlpha-helix secondary structure were confirmed by circular dichroism measurements in THF (Fig. 1c). The assembly of NPs and peptidic polymers was carried out in THF: solutions of platinum NPs and of PBLG were mixed and stirred for two hours. Transmission electron microscopy (TEM) showed unexpected lamellar assemblies of the hybrid materials (Fig. 1d), alternating zones containing (dark) or excluding (white) NPs. Such an organization has been observed on both silicon substrates and TEM grids by different microscopy techniques: atomic force microscopy and scanning electron microscopy, in addition to tomography imaging showed that the NPs constitutes cylindrical lamellae, without any preferential arrangement within each lamella (Fig. 1e). Cryo-microscopy proved the existence of the structuration in the THF solution.

In summary, the coordination bonding between the polymer functional groups and the NP surface afforded unprecedented lamellar organization. The results of the present study also show it is possible to tune the dimension of these lamellar assemblies by simply varying the molar mass of the homopolymer.


If you want to read more about this work, you can check out our article in Nature Communication! 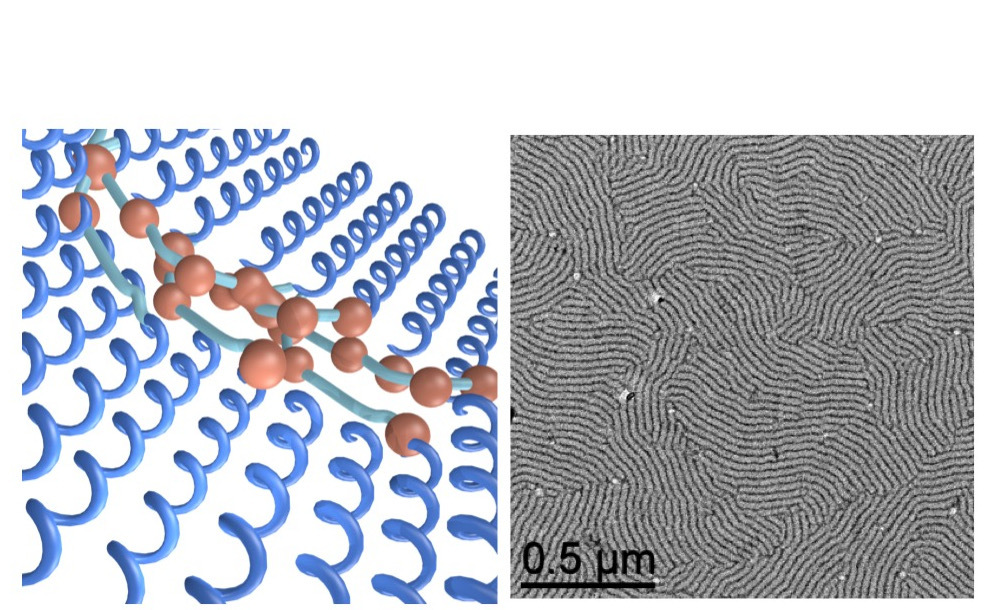 Polymer-guided self-assembly of metallic nanoparticles (NPs) is an effective approach for structuring matter at the nanoscale. So far, the strategy to align NPs consists in decorating copolymer lamellae. We report that peptidic homopolymers can also lead to 2D lamellar organization of NPs.