We are glad to share with the scientific community the latest results of our work on “Scalable and selective deuteration of (hetero)arenes”. Originally, the first version of this manuscript was submitted to Nature Chemistry in October 2020. One year later, after three rounds of rebuttals and revisions, with numerous new additional experiments performed under strict pandemic safety protocols, the manuscript was finally accepted. Here, we report a sophisticated nano-structured catalyst that is readily prepared from abundant cellulose in combination with convenient iron salts. Nature Chemistry’s review team worked great for this work, the reviewer’s comments were critical, demanding as well as harsh at times but were insightful and constructive, finally leading to a much-improved manuscript. We appreciate this process which really made this a better work. This manuscript has one of the most rigorous reviews process that our group’s work has gone through. Therefore, we considered it as a "never-ending story" before the recent acceptance.

About 10 years ago, I started my research work in homogeneous catalysis. At that time my interest focused on transition metal-catalyzed C–H functionalization, which were also the topics of my master degree and PhD degree studies. Based on the advancements in homogeneous metal–catalyzed C–H activation, organometallic complexes evolved for catalytic functionalization reactions of arenes (Figure 1). The selectivity could be controlled by the directing groups.

Five years ago, I started as a postdoctoral fellow in Matthias Beller’s group. During this time my interest switched in part from homogeneous to heterogeneous catalysis, especially for applications in deuteration reactions. We discovered that the cellulose derived nano-structured iron catalyst showed extremely good selectivity in the H/D exchange reactions of (hetero)arenes (Figure 2). To be honest we were confused by the high selectivity at the very beginning of this project. How can such a heterogeneous iron catalyst give the observed selectivity in this transformation?

To understand the structure of the Fe-Cellulose-1000 catalyst, powder X-Ray diffraction (XRD), X-Ray photoelectron spectroscopy (XPS), scanning transmission electron microscopy (STEM), and X-Ray absorption spectroscopy (XAS) were performed. The catalyst characterization data show that the freshly pyrolyzed material consists of low oxidation state Fe/Fe3C nano-particles, covered by graphene layers with a thickness of 6-10 nm. Therefore, we infer that the Fe(III) precursor is reduced during the pyrolysis under an argon atmosphere. We suppose that cellulose or the products in the pyrolysis process e.g. char, aerosols as well as levoglucosan, furans and pyrans are probably the reductants. EPR studies show that the Fe catalyst can promote to a small extent homolytic splitting of D2O and produce *OD species. Considering the well-known fact that •OD radicals are very reactive and unselective, we proposed a concerted mechanism in which D2O is split homogeneously by the iron catalyst. The mechanism is relatively reasonable based on the preliminary mechanistic studies.

Figure 3. The coordination of aromatic rings to iron.

Iron dust can react with water under heating conditions to produce hydrogen. Therefore, the low oxidation state of Fe/Fe3C species might be essential to activate D2O at relatively high temperature (Figure 4). The produced *OD and D* species are not liberated into the solution but remain adsorbed on the catalyst surface. *OD abstracts a hydrogen atom from the phenyl ring forming HDO and the corresponding phenyl* species, which subsequently produces the deuterated product.

In conclusion, the catalytic labeling protocol follows a completely different “water-splitting” mechanism compared to other known deuteration reactions; thereby allowing the use of the most practical deuteration agent: D2O. More specifically, the presented system is effective for selective deuteration of a variety of substrates, e.g. anilines, indoles, phenols, and other heterocyclic compounds including late-stage deuterium labeling. Following a complementary “complete-deuteration-selective-dedeuteration” approach, also different positional deuterated products can be obtained for the first time in a practical manner.

We think this work will stimulate and inspire researchers working in various areas like drug discovery, organic chemistry, catalysis, and material sciences as well as inorganic chemistry. 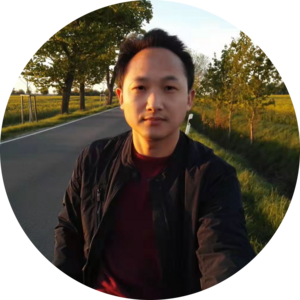 I received my Ph.D. degree in 2015 from Wuhan University under the supervision of Prof. Aiwen Lei. In 2016, I joined Prof. Matthias Beller’s group at the Leibniz Institute for Catalysis (Germany) as a postdoctoral fellow. My research interests focus on the development of nano-metal catalysts for isotopic labelling reaction.