Computer simulations using the descriptor of a fragment of a supramolecular capsule reveal a class of smart capsules whose host•guest complexation is driven by the guest-induced barrier for decomplexation and incentives for smarter capsules and alternative drug design strategies.

Carcerands, comprising two bowl-shaped resorcinarene fragments tethered rim-to-rim with chemical linkers, are supramolecular capsules that were developed as synthetic molecular cells by Donald J. Cram and his coworkers in 19851. The complexation of these synthetic cells with small-molecule guests is achieved through a cumbersome process. Specifically, the guests have to be dissolved in the reaction medium during the host synthesis so that the rim-to-rim tethering reaction entraps and permanently keeps the guests inside the host cavity.

In 1990 the Cram lab developed a class of carcerand variants termed hemicarcerands2. These second-generation synthetic cells form complexes with guests through a less cumbersome process. The guests enter or exit the host cavity when temperature is raised to open the host cavity portal, and remain in the cavity after an ambient temperature is reached to close the portal. Relevant to biology, hemicarcerands offer a model system to conceptualize constrictive binding3 (host•guest complexation affected by the activation energy for a guest to pass through a narrow portal of the host cavity) and to investigate gating as a control element in constrictive binding4, but they are water insoluble and cannot be used in biological systems.

In 1997 the Cram lab developed a water-soluble hemicarcerand variant (Octacid4)5. This third-generation synthetic cell can simply form complexes with guests in water at room temperature and has been used in a biological system6. However, without the need to dissolve the guests in the reaction medium or to adjust temperature to control the cavity portal, how Octacid4 incarcerates guests at room temperature has hitherto been unclear. This prompted our work that is now published7 and outlined below. 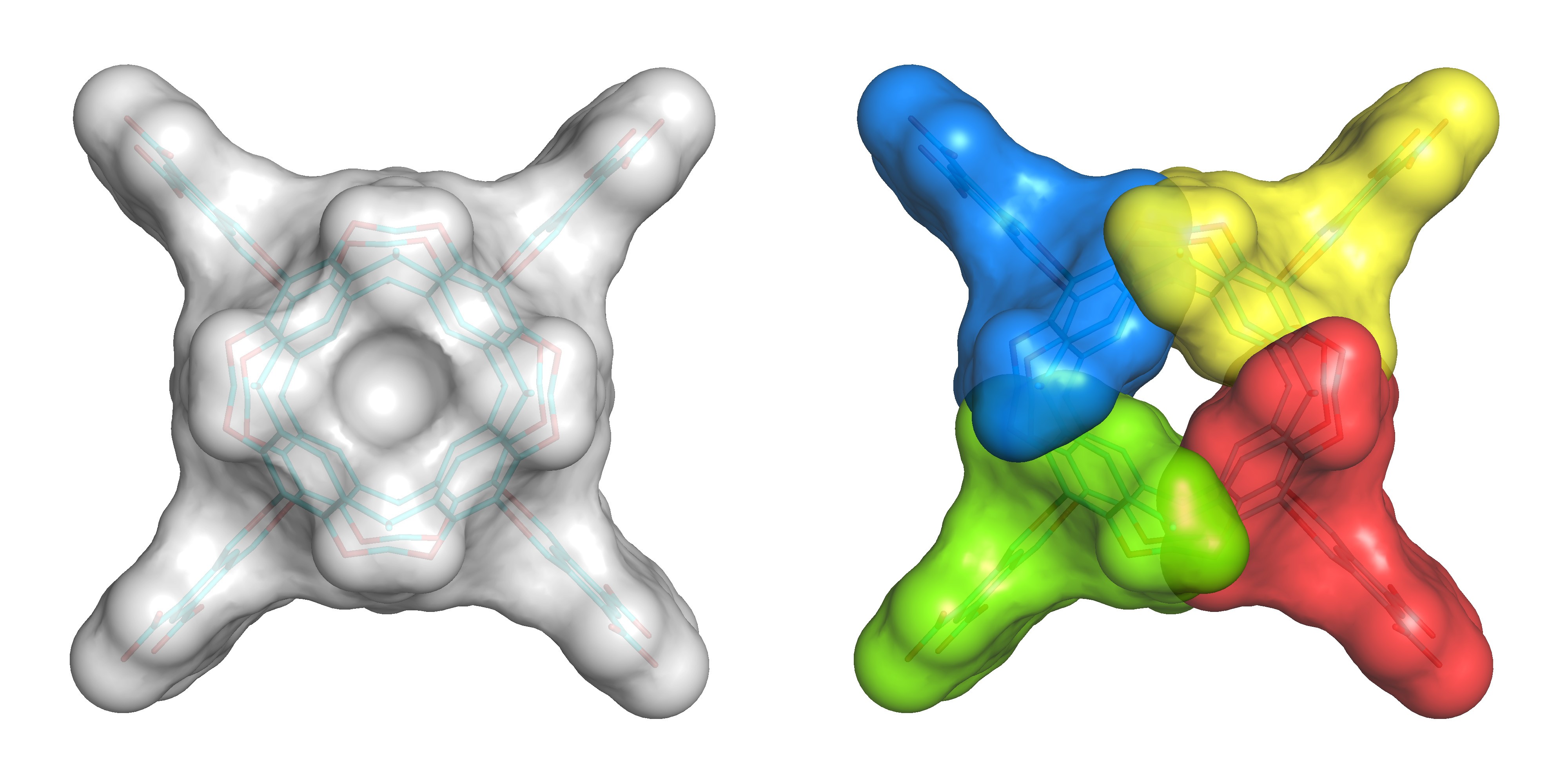 Proposing a complexation mechanism for Octacid4

We developed a modular simulation method that simplifies the molecular dynamics simulations of Octacid4 through the use of the descriptor of a fragment of Octacid4 rather than the descriptor of the intact Octacid4 that comprises four identical copies of the fragment (Fig. 1). From the simulations of the apo Octacid4 using our modular method, we observed that Octacid4 alone in water adopts two clusters of conformations one of which has a cavity portal open at room temperature (Fig. 2). For the guest-bound Octacid4 in water, we observed that upon entering the host cavity all guests change their orientations and then keep spinning inside the cavity. Such guest motions cause the host to change its conformation, resulting in a cluster of host conformations with all cavity portals closed at room temperature (Fig. 2). These observations constitute a complexation mechanism explaining how Octacid4 incarcerates guests at room temperature in a manner different from those of (hemi)carcerands. 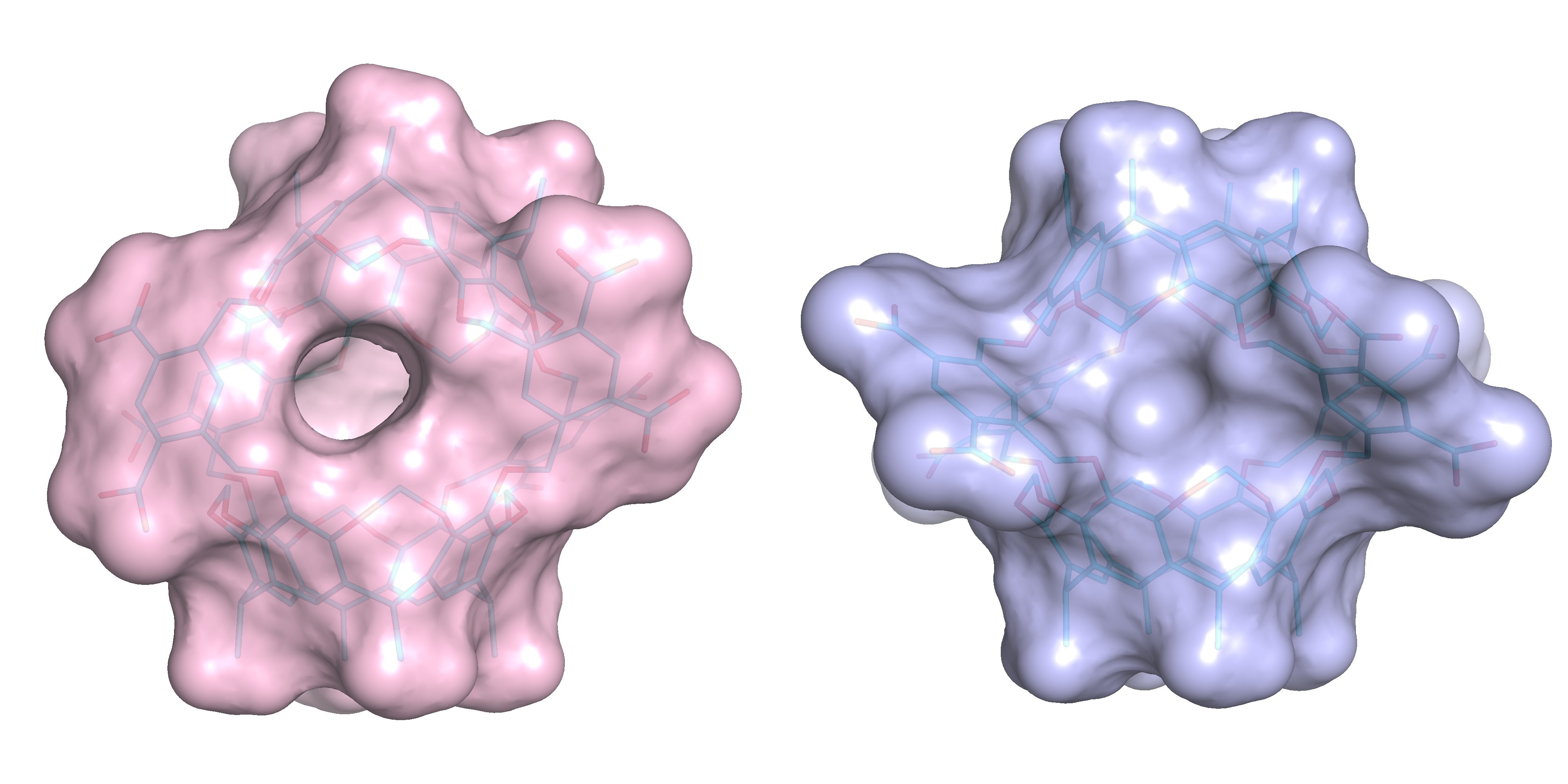 Suggesting a classification name for Octacid4

In view of our observations and insightful reviewers’ comments, we suggested for Octacid4 the classification name neocarcerand, which represents a class of supramolecular capsules capable of host•guest complexation that is driven by the guest-induced energy barrier for decomplexation, namely, a class of smart capsules with hidden traps. This name helps distinguish the conformational capabilities of Octacid4 from those of (hemi)carcerands. It underscores the Octacid4 structure that is flexible to adopt a cluster of apo conformations with one cavity portal open at room temperature and yet prone to rigidification by its guest to close all cavity portals at room temperature.

Expanding the capabilities of Octacid4 to shuttle biologics

The modular method explained with a symmetric Octacid4 conformation shown in Fig. 1 is easy to comprehend, but complicated with asymmetric Octacid4 conformations shown in Fig. 3. Notably, these asymmetric conformations can all be obtained from the simulations starting with the same symmetric conformation; the Octacid4 structure is conceivably designed with the modular concept so that each fragment in Figs. 1 and 3 has some degree of conformational autonomy. Therefore, one incentive from our work is to incorporate modularity in designing, simulating, and synthesizing next-generation, larger, and smarter synthetic cells that can shuttle peptides or other biologics. This modularity offers capsule conformation diversity and computational advantages as described in our paper as well as synthetic efficiency as demonstrated by the syntheses of Cram’s capsules with the D4h symmetry. 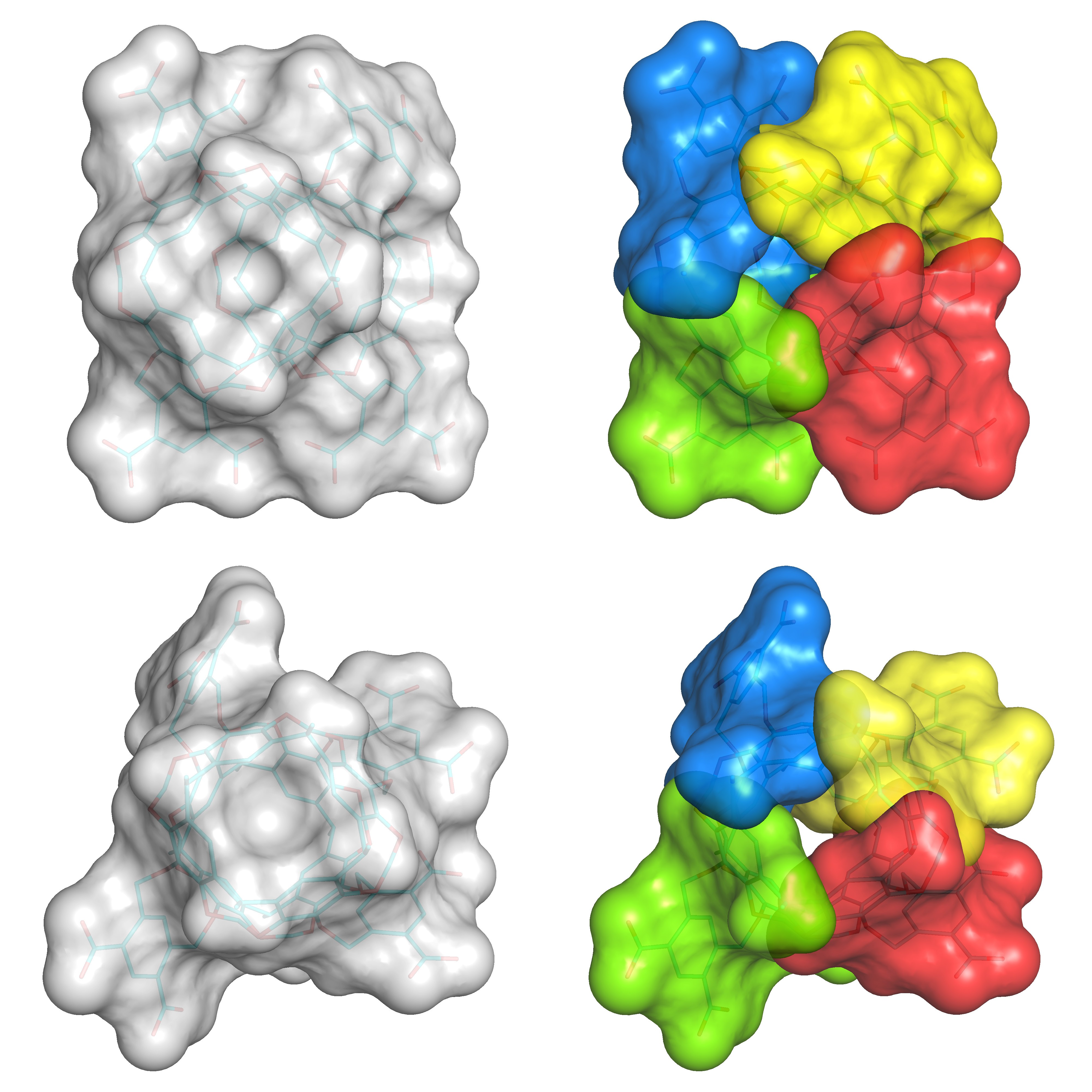 Related to the synthetic efficiency, another incentive is to incorporate constrictive binding in drug design. Drug design based on intrinsic binding (host•guest complexation governed by intermolecular interactions between complexation partners as well as between each partner and solvent) has not been as effective as promised, partly because only a limited number of functional groups can be introduced to a guest structure to improve intrinsic binding due to restrictions by the time and cost of chemical synthesis8. As apparent from our work, constrictive binding requires only a few simple functional groups to trigger the host conformational change that hampers decomplexation. To overcome the time-and-cost restriction problem at the root level, we advocate alternative drug design strategies based on both intrinsic and constrictive bindings. 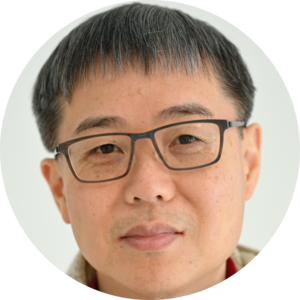