Just like any other paleoclimate reconstructions, paleotempestological reconstructions utilize methods called “proxies”. One of the most used proxies is the stable isotopic composition of precipitation (i.e., δ18O and δ2H), which is based on modern observations that tropical cyclone precipitation is generally much more depleted in heavy isotopologues (in other words, more negative δ18O and δ2H values) than non-tropical cyclone precipitation. The isotope signal of precipitation can be preserved in a variety of high-resolution, continuous geological archives (e.g., speleothems, tree rings, corals, sediments), making it more advantageous compared to other conventional approaches such as historical documentary records or sedimentological records, which are commonly limited by poor spatial coverage.

During the extremely active 2017 Atlantic hurricane season, three landfalling major hurricanes made devastating impacts (Harvey, Irma, and Maria) to the southern United States and the Caribbean. Among them, Hurricane Harvey set the record for both total rainfall and affected area in the US history (Figure 1). However, Hurricane Harvey also provided us with a great opportunity to study the isotopic variability of tropical cyclone precipitation at exceptionally high resolution. Researchers from the Jackson School of Geosciences at The University ofTexas at Austin and the Department of Earth and Planetary Sciences at The University of Texas at San Antonio collaborated to collect Hurricane Harvey precipitation simultaneously in Austin, San Antonio, and Houston throughout the storm. To our knowledge, such a systematic rainwater collection campaign during a tropical cyclone is unprecedented, and as a result, provides unique insights into the controls on the isotopic composition of precipitation during a tropical cyclone event.

Overall, the δ18O and δ2H values of Hurricane Harvey rainfall are significantly more negative compared to the isotopic values of non-tropical cyclone rainfall in Texas reported in our previous studies. Comparing the temporal evolution of δ18O and δ2H at the three sampling locations, we find that the δ18O and δ2H are generally more negative near the center of the hurricane and more positive at the edge (Figure 2a). While previous studies have noted similar spatiotemporal patterns of isotopic variability tropical cyclones, little is known about the mechanism driving such changes.

Because it seemed that local weather conditions had limited influence on the evolution of δ18O and δ2H during Hurricane Harvey, we then examined whether changes in moisture transport played a more important role. To do so, we modelled the moisture transport trajectories throughout the storm using the Hybrid Single-Particle Lagrangian Integrated Trajectory model (HYSPLIT). We found that although moisture arriving at our sites was consistently derived from the Gulf of Mexico throughout the event, there was a distinct difference between the moisture transport pathways when samples were taken near the edge and the center of the hurricane. At the outer edge of the hurricane, water vapor was transported directly from the Gulf of Mexico. In contrast, samples near the hurricane eyewall were derived from moisture with trajectories that had orbited around the eye of the hurricane (Figure 2c).

How do changes in the moisture transport pathway impact the δ18O and δ2H of rainwater? We found that near-eyewall air parcels that orbited around the hurricane eye had experienced more total amount of rainout, which led to isotopic depletion due to the “Rayleigh distillation” effect. In this theory, because heavier isotopologues (1H2H16O and 1H218O) condensates faster than the light isotopologue (1H216O), 2H and 18O are preferentially removed from the water vapor, leading to gradual depletion of these heavy isotopes in the remaining water vapor. When such isotopically depleted water vapor was transported to our sampling sites, the resulting rainwater would also have more negative isotopic values. Therefore, the closer we are to the center of the tropical cyclone, the more the vapor-bearing airmass has experienced rainout, and the more negative the isotopic values of rainwater are (Figure 2b). We further found that the control of upstream rainout on isotopic variability is robust in many other previously reported datasets of tropical cyclone precipitation, though future studies need to investigate the interplay of the isotope-enriching effect of post-condensation re-evaporation and upstream rainout.

With our improved understanding of the mechanisms driving isotopic variability in tropical cyclone rainfall, one remaining question is: how robust is water isotope as a proxy for past tropical cyclone activity? We assessed the impact of Hurricane Harvey on the annual mean δ18O of precipitation in the southern US by comparing the spatial characteristics of Harvey δ18O against the climatological mean δ18O from the multi-model ensemble mean of Stable Water Isotope Intercomparison Group Phase 2 (SWING2) data. We found that while Hurricane Harvey produced a large amount of rainfall with exceptionally low isotopic values across the southern US, whether such a signal can be detected in annually resolved paleo-records will depend not only on the isotopic value of the storm itself, but also on the ratio of storm precipitation total : mean annual precipitation (Figure 3).

More details can be found in our article published in Communications Earth & Environment: https://www.nature.com/articles/s43247-022-00381-1. 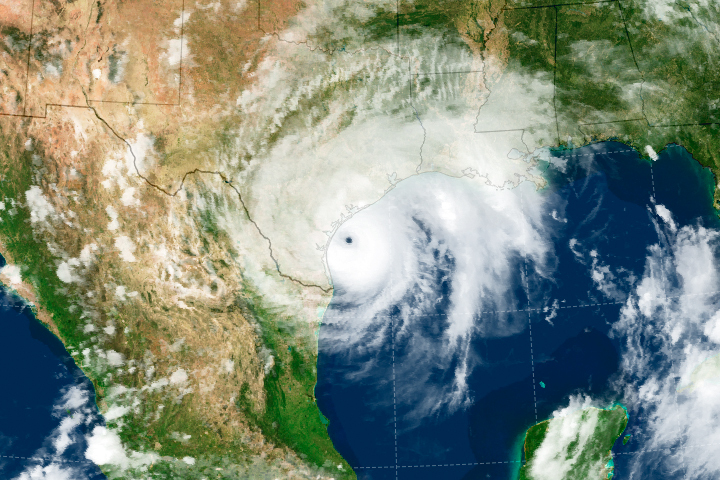