Two-dimensional polymers ordered on the mesoscale were synthesized on a solid graphite surface by shining light on a highly ordered self-assembled monolayer of photoactive monomers. High resolution Scanning Tunneling Microscopy provided detailed insights at the level of single linkages. 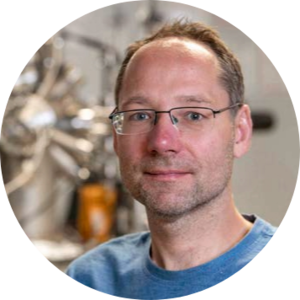 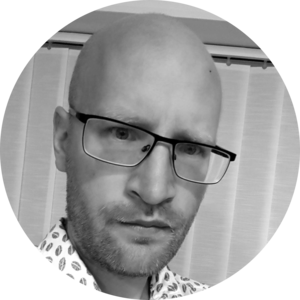 The conceptual idea for the two-staged synthesis of mesoscale ordered carbon-carbon (C-C) bonded two-dimensional polymers (2DP) is as simple as elegant: (1) exploit supramolecular self-assembly and self-healing to afford a highly ordered photoactive 2D network of monomers; (2) fixate the network by shining light to form covalent bonds between the monomers while maintaining the regular arrangement, hence order attained in step (1). Yet, the grand challenges lie in the questions of what linking chemistry is feasible and how a corresponding monomer could look like?

By deploying photochemistry, specifically cycloadditions, Dieter Schlüter pioneered a powerful synthetic approach to make C-C bonded 2DP from three-fold symmetric photoactive monomers.1,2 In order to facilitate intermolecular photopolymerization, the monomers have to be ordered such that their photoactive moieties are appropriately arranged with respect to each other. Two approaches prevail for achieving this ordering: growing layered bulk crystals or assembling the monomers on surfaces. Interestingly, first studies used water surfaces,3,4 giving rise to the renaissance of the Langmuir Blodgett (LB) technique.

Ben King became intrigued by the chemical synthesis of 2DP during his sabbatical in 2010 at the ETH Zurich. Eventually, he devised and synthesized the three-bladed fantrip monomer based on triptycene with extended fluorinated anthracene blades. Also this monomer has been successfully polymerized in a single-crystal-to-single-crystal (SCSC) approach.5 A huge asset is the possibility to unequivocally resolve the structure by single crystal X-ray diffraction (XRD) also verifying 2DP formation. Even though the precision of XRD to pin down atomic positions is unparalleled, further relevant structure details as topological defects, unpolymerized linkages and vacancies are intricate to assess. Moreover, delaminating the stacked 2DP crystals to isolate a monolayer sheet constitutes a formidable challenge. As for other exfoliation processes, the mechanical enforcement by sonication substantially degrades the lateral extension of the 2DP with a trade-off between sheet thickness and its lateral extension.

For me it was a fortunate incidence to learn about the fantrip 2DP at the International Symposium on Synthetic Two-Dimensional Polymers held in 2014 in Zurich. Back then structural characterization of 2DP by high resolution microscopy was an open, but crucially important question. Although tremendous progress has been achieved with transmission electron microscopy, which is now able to corroborate 2DP structures not only in reciprocal but also in real space, achieving molecular resolution still remains intricate.

Coming from a surface science background with prevailing ultra-high vacuum (UHV) conditions, our experimental approach would rather comprise solid surfaces as templates and thermal sublimation for deposition. In contrast to the delicate and thermolabile monomers used in the Schlüter group, fantrip appeared to be a good candidate for thermal sublimation. In parallel, we studied 2DP synthesized from a fantrip analogue in a LB trough by Scanning Tunneling Microscopy (STM). This required subsequent transfer of the 2DP from the water to a solid surface. Albeit well established for 2D materials, it is by no means straightforward to avoid damage as wrinkles and ruptures, notwithstanding the impossibility of avoiding entrapment of water and other foreign species between the transferred material and its new support. In STM experiments, most of the time we had the impression that “something is there”, but getting a hold of the 2DP was exceedingly difficult. This may be related to the relatively large electronic bandgap of the 2DP in concert with a certain degree of transfer-induced non-planarity. Nevertheless, we eventually managed to acquire STM images that corroborated the 2DP’s porous hexagonal structure.4

This was the starting point when we introduced fantrip to the UHV-world. After verifying its thermal stability, depositing fantrip and acquiring STM images was relatively straightforward. For initial experiments we used Au(111) surfaces, where we observed regular structures, the image below shows an example. It was immediately clear and also expected that the resulting arrangment of fantrip on Au(111) is inappropriate for photopolymerization, but it neatly confirmed the possibility of depositing highly pure fantrip monolayers.

So the immediate next task was to realize a photopolymerizable fantrip monolayer. As the desired structure is governed by molecule-molecule interactions, the pursued strategy was weakening molecule-surface interactions. Yet, graphite as a putatively weakly interacting substrate afforded a similar fantrip adsorption geometry as on Au(111). From there, it was obvious that we had to weaken the molecule-surface interactions further. Eventually, we came up with passivating the graphite surface with an alkane monolayer, which can be easily prepared by vacuum sublimation, is symmetry mismatched to the fantrip networks, forms highly ordered large domains and, last but not least, is photochemically inactive. It may be briefly mentioned that finding the right conditions for self-assembly of a photopolymerizable fantrip monolayer was by no means a linear path with many side streets of which at least a few provided insights. A word of caution when illuminating highly ordered molecular arrangements with linearly polarized light: Pay attention to the orientation of the transition dipole moment!

Comparison between experiment and theory was important

To prove successful photopolymerization, a detailed comparison of experimental and theoretical results was essential. Density Functional Theory simulations of STM images and IR spectra carried out by Jonas Björk showed a - in our opinion - almost too good agreement with the measurements. An intriguing finding of our study was the vast influence of temperature both on the photocycloaddition itself due to a small energy barrier for coupling in the photoexcited state and on monomer mobility that is necessary to compensate shrinking of the lattice upon 2DP formation.

In my opinion, among the competing synthetic routes, on-surface photopolymerization bears the highest potential to afford macroscopic single-crystalline 2DP. Comparable 2DP have been shown to be mechanically robust enough to span micron-sized holes. This is the foundation for further exploring the unique properties of 2DP as for instance mechanical characteristics or their promising prospects for separation with both high efficiency and selectivity by molecular sieving.