On the danger of performative DEI discourse

A true commitment to DEI is centering those principles in every decision and as the core values of any collaboration or organization. If chemists want to participate in DEI efforts, then they need to listen, educate themselves and live by the principles even when it is uncomfortable or hard.

This post was edited on August 21, 2020 because SpringerNature believed I violated community Rule 12

12) Don’t be libellous or abusive.

You must not make or encourage contributions that are:

I did my best to engage with the authors of the article  "A diverse view of science to catalyze change" in a scholarly manner. I wanted the conversation centered on what matters, that is clarifying why the article had failed to meet its goal and how its publication hurt the work and scholarship of DEI in Chemistry.

So given that I was "invited" to "contribute my personal views on science and DEI" I will share here why the article got DEI wrong, not because they are moderates, or wanted to bring this to the "mainstream" by using language everyone would understand. They failed because they don't understand the essence of DEI, it's history, the people who built with sweat and blood, and the constant silencing of marginalized scientists. 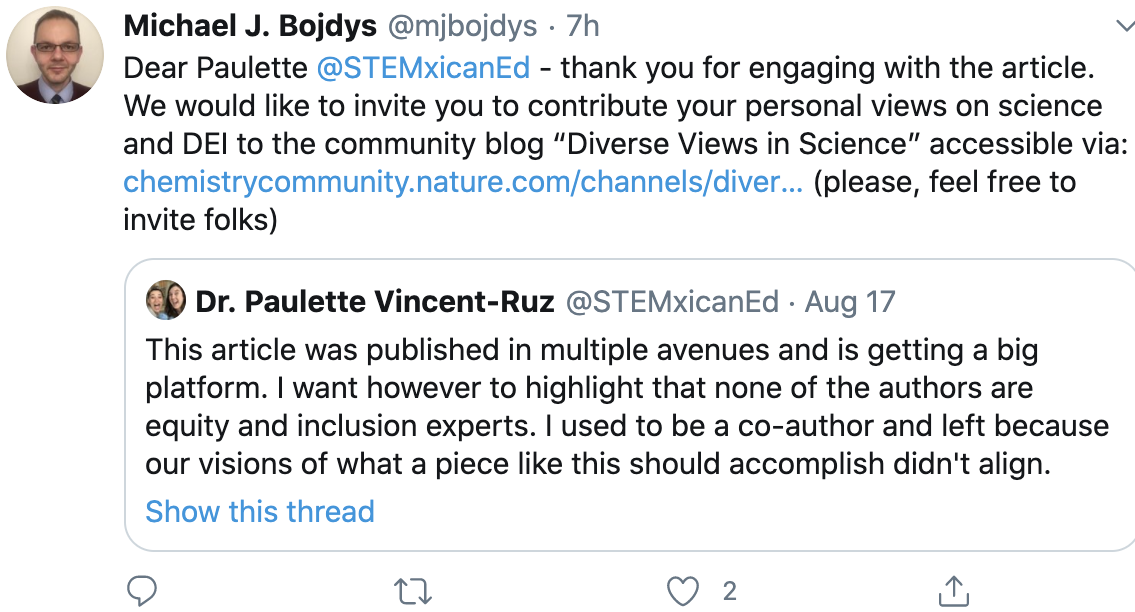 Is very important to note that none of the authors of the piece have any expertise in education or equity matters. They certainly have the right to express their stories of being marginalized in STEM. Their experiences are valid and should be heard. But, policy prescriptions and statements on how to make changes should be made by the people that have spent their time working not only to understand the work done in the past but also to honor it as we move into the future.

Equity and Justice are not a matter of opinion, they are a moral imperative. This is an example of how those of us who are constantly in the trenches trying to make changes are told we are "aggressive", are gaslighted, and are blamed when moderates refuse to change. Writing kumbaya things that will please everyone is easy. Living by the things we say is harder. Claiming to create a "new era" of DEI, or claiming that you are helping create space for marginalized scientists is easy. More often than not, however, the actions never happen. But behind closed doors, the exchange of white power and the oppression of marginalized scientists keep happening. That is not something you can put in the supporting information of your paper.

It is interesting to me how this piece got the buy-in of so many publishers when none of the original authors had DEI expertise. It is very easy to publish pretty words about inclusion and diversity, but it is harder to speak truth to power. But when the performance is over, judge them by their actions not their words. What currently is called DEI(TM) is, in reality, an amalgamation of the knowledge that has been produced across all fields of social science, and the knowledge and wisdom from grassroots efforts. So all the calls that are been done by organizations, institutions of higher education, or "well-meaning people", is in reality the means of survival produced by the lived experiences and oppression of many, particularly black and indigenous women.

DEI is not a policy, measure to increase economic impact or a committee. A true commitment to DEI is centering those principles in every decision and as the core values of any collaboration or organization. Is knowing when we need to take a step back, even when we are also marginalized. If chemists want to participate in DEI efforts, then they need to listen, educate themselves, and live by the principles even when it is uncomfortable or hard. Rep. John Lewis probably said all of this better than anyone else: "Get in good trouble, necessary trouble" 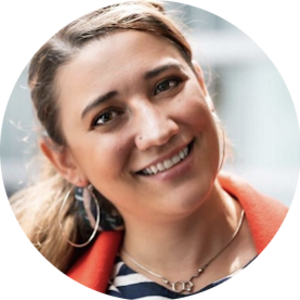 Stephen O Aderinto
Nature Portfolio Chemistry Community
We use cookies to help improve your experience. By continuing to browse our website you are consenting to our use of cookies.
Learn more