Common plastics like polyethylene, polypropylene and Nylon crystallize during melt-processing. Their thin lamellar crystals organize in aggregates called spherulites, cyllindrites and “shish-kebabs”. They have been studied for decades, but no one has yet seen them in 3D.

Polymer spherulites cover a wide length scale from a few μm to a mm. They  have been extensively investigated, mainly by polarized optical microscopy (POM) since synthetic semicrystalline polymers (SCP) were invented. It has long been recognized that these morphologies are key determinants of mechanical and optical properties of SCPs.

Some outsdanding and non-trivial work has been done observing stacks of lamellar polymers crystals using electron tomography, a method similar to medical CT but using a fine beam of electrons instead of a wide beam of X-rays.[i] However only fragments of spherulutes could be explored by this electron microscopy technique.

In our paper, we describe an optical method for visualizing internal microstructure of homopolymers and their nanocomposites in 3D. It is based on confocal laser microscopy, a technique now well established for studying biological systems. In this method a focused laser beam scans the sample along x and y, inducing fluorescence which is recorded by a detector. The sample is raised in z-steps of e.g. 1 μm and the 3D image is then reconstructed from the acquired z-stack. The problem to overcome was how to create contrast in a material that is chemically uniform, such as a homopolymer. This was solved in two ways. (i) It has been noted[ii],[iii] that small-molecule additives such as dyes and UV-stabilizers, originally uniformly dispersed in the melt, get partially excluded and pushed ahead of the growing spherulites during crystallization. Thus once the spherulites had collided, the dye marks their polyhedral boundaries – see Fig. 1a. Alternatively, (ii) labelling can be applied after crystallization, by infiltrating a dye solution into the solid material, relying on the spherulite boundaries to provide the pathways of easy diffusion. The immersion method has been applied in producing images in Fig. 1b.

By quenching midway through the crystallization, freely growing isolated micro-objects can also be captured in 3D. This then allows visualization of spherulites as true spheres, rather than disks, as has been the case in the last 80 years of their observation by POM of thin films. While in many cases we find the growing spherulites truly spherical (Fig. 1c), often they are elongated in the direction perpendicular to the film surface. Especially their growt often accelerates when they approach the surface of a solid substrate, giving them the appearance of vases with a neck (Fig. 1d). 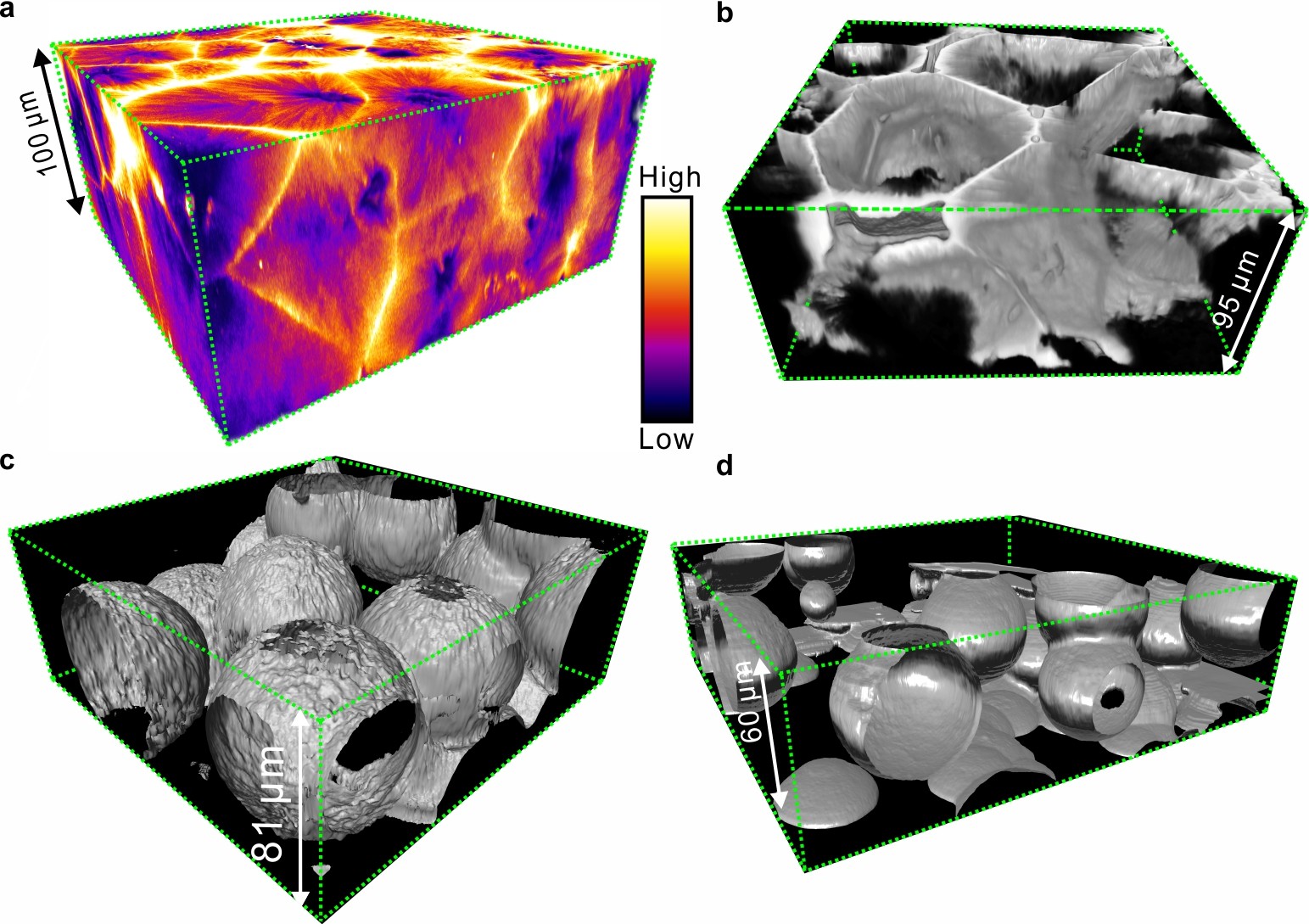 Our study has also shown the unsuspected extent to which nanoparticles, even as large as 200 nm, are redistributed and pushed to spherulite boundaries during crystallization of a polymer nanocomposite. For this part of the study silica NPs were covalently grafted with a customized Nile Red derivative. Fig. 2 shows their aggregation at spherulite boundaries in poly(lactic acid) (PLA) and polypropylene.

Figure 2. Fully crystallized polymers with 200 nm NR-labelled silica nanoparticles. Left: PLA, right iPP. Colour palette is the same as in Fig. 1. Both in PLA and in iPP the NPs tend to concentrate at spherulite boundaries as they were pushed ahead of the growing spherulites.

However, the biggest surprise of the study was the appearance of the part-crystallized PLA nanocomposite. Figs. 3(a1,a2) show z-slices at the bottom and the top surface of a 34 µm film. The top surface is almost an exact copy of the bottom one. This means that the spherulites nucleated on opposite surfaces within seconds of each other. How did they communicate?

Observing the 3D morphology in Fig. 3b brings us closer to the answer. The picture shows what appears like a treasure find of ancient bowls, vases and ceremonial drinking cups (chalices, or goblets). Most of the objects have a widened circular base at the bottom and the top; these are believed to be half-spherulites nucleated on opposite surfaces. In panels c1-c4 we present our explanation of the formation of a “goblet”, by showing individual pieces of “crockery” each at a different stage of development. The corresponding schematics are shown in panel d. Due to volume contraction on crystallization, formation of a half-spherulite at the top surface (c1,d1) creates negative pressure around it and at the surface opposite, where supply of replacement polymer melt by diffusion is most limited. This is where nucleation of the second half-spherulite is stress-induced (c2,d2). As both half-spherulites grow toward each other a connecting stress field develops and trigger nucleation and growth of “shish-kebabs”; these initiate the formation of the “stem” of the goblet (c3,d3). In fact we managed to capture the beginning of fibrous shish-kebab formation – see inset in Fig. 3(c3). Thus a goblet is formed (Figs. 3(c4,d4)). Finite elemt simulation of stress- and low-fields around growing spherulites has confirmed quantitatively what the schematic in Fig. 3 shows qualitatively. 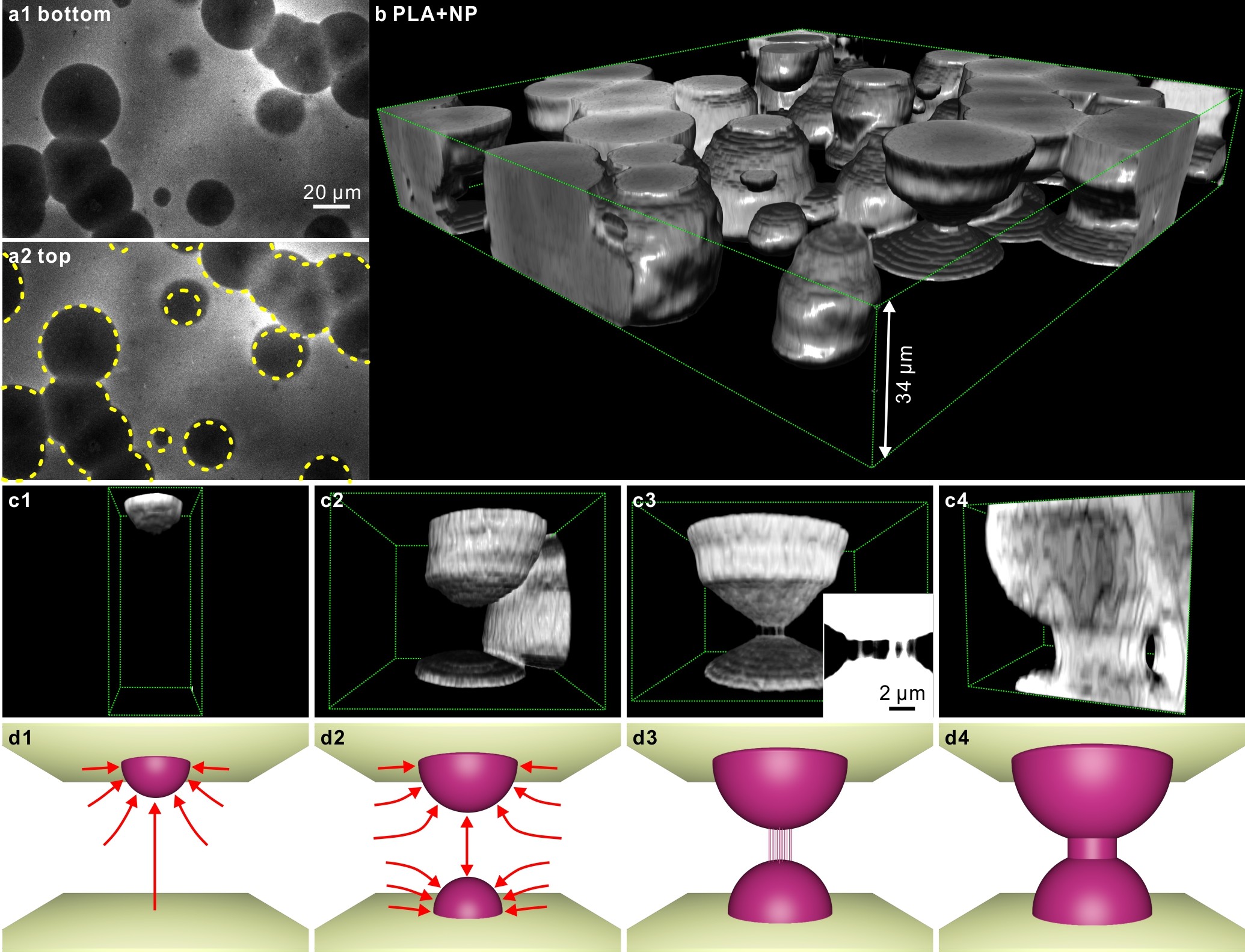 Figure 3.  Nucleation mirroring, shish-kebabs from “quiescent” melt and goblet morphology in PLA nanocomposite. PLA containing NR-labelled silica NPs was crystallized isothermally at 130 °C, then quenched in ice.  a, z-slices (a1) near the bottom and (a2) near the top surface, illustrating nucleation mirroring across the sheet thickness. b, Arrested spherulite growth in a 34 µm film; the morphology resembles a treasure of ancient crockery. See also VIDEO. c, Selection of images reconstructing different stages of formation of a “goblet”,  d1-d4, Schematic representation of the four stages of goblet formation, roughly corresponding to (c1-c4), with the arrows indicating the approximate direction of melt flow

None of the things seen in Fig. 3 have been expected. The fibrous “shish-kebab” structures are common in melt-spun fibres or blown films such as those used in production of plastic bags. They have been known to form in flowing melt or solutions, but not in static processes such as compression moulding, used in the production of current samples. The present study brings to light a number of previously hidden aspects of polymer and composite microstructure and the processes leading to their formation. Had the film in Fig. 3 been observed by POM, only birefringent circles would have been seen, assumed they were spherical spherulites, and nothing unusual would have been suspected.

A number of people have cut their teeth on this project over a number of years. Pantea Kazemi started it followed by Zhen-Zhen Wei who perfected the imaging technique. Liliana Cseh designed the synthetic route to labelled NPs, a task executed by Hina Saba and Hui-Jie "Jason" Xie. Xiang-bing Zeng did the finite element analysis. But the greatest contribution was made by Shu-gui Yang, who brought the work to a higher level. All involved worked hard and with dedication. 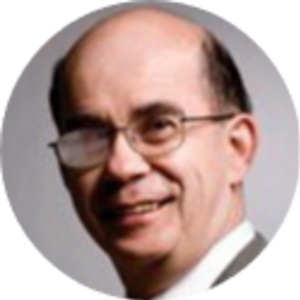