Miguel A. Soto
Research Associate, University of British Columbia
Follow
Like Liked by Evelina Satkevic and 3 others
0

Preassembled materials are ubiquitous in our everyday life due to their readiness and functionality; an end-user simply follows instructions to assemble them and harness function. Here, metastable rotaxanes are utilized to approach preassembled materials: a multicomponent, preprogrammed system can b…

Many commodities and materials (even meals!) we see daily are preassembled for us; the end-user simply follows a set of instructions to put the final product together. A frozen meal, for instance, has all ingredients enclosed and just needs to be warmed up. Recommended temperatures and cooking times give the meals their final and tasty looks. These preassembled systems are useful and prevalent in many areas and inspired us to seek for chemical approaches to create functional preassembled materials.

In our first studies (Org. Lett. 21, 1744–1748 (2019); Chem. Sci. 10, 10422–10427 (2019)), we prepared rotaxanes that borrowed some ideas from Dasgupta et al. (Chem. Sci. 3, 425–432 (2012)), who showed that a rotaxane composed by a 22-membered ring and a dibenzylammonium (DBA+) guest disassembles when heated in solution. With this in mind, we prepared rotaxane A (Figure 1a), having a central phenylene ring and two flanking crown ethers that irreversibly escape from the structure when heated. The phenylene core on the linear component (guest) is a good recognition site for the host CBPQT4+ (Figure 1b), but these two elements cannot interact when the flanking crown ethers are locked on. However, if A and CBPQT4+ are combined, heated in solution, and allowed to cool down, a fast domino effect occurs in solution that results in a colorful readout (Figure 1c). In this case, heat drives (i) the release of the flanking crown ethers, (ii) threading of CBPQT4+ onto the phenylene core of the guest, and (iii) host‒guest charge-transfer (Figure 1d) that produces color.

While navigating this project, we imagined that not only the central portion of the guest could perform after been delivered to the medium but also the outer DBA+ moieties. We had particular interest in using the DBA+ units to crosslink a polymer and form supramolecular polymer networks (SPNs). Before moving into any elaborated experiments, we confirmed that a SPN forms by mixing the guest with poly(DB24C8) (Figure 2a) generating a gel. We anticipated that mixing A with CBPQT4+ and poly(DB24C8) would not lead to gel formation (and color change) until the sample was heated to remove the flanking crown ethers. Alas, incompatible solubility of CBPQT4+ and poly(DB24C8) made the proof of our hypothesis impractical – CBPQT4+ and poly(DB24C8) dissolve in polar solvents and halogenated solvents, respectively. Despite numerous attempts with different solvent mixtures and counterions for CBPQT4+, we never obtained homogeneous samples.

To circumvent the problem, we (i) tweaked the structure of the guest (crosslinker), switching the central phenylene unit by a bipyridium (BIPY) core, and (ii) swapped host CBPQT4+ with DN38C10 (Figure 2b), which is complementary to the newly added BIPY. The new version of the crosslinker and DN38C10 were soluble in CHCl3/CH3CN mixtures at various concentrations. We used the new crosslinker to synthesize metastable [3]rotaxane ([3]MSR, Figure 2c) via a Ru-catalyzed metathesis reaction. In its pure form [3]MSR was isolated as a brown sludge (Figure 2d), which was very problematic considering that we were targeting SPNs whose color would rise from intercomponent self-assembly and not from undesired impurities. After much examination, we found that the color in [3]MSR originated from trace amounts of Ru-containing species; this was resolved using biphasic washings of [3]MSR with aqueous H2O2.

Figure 2. Chemical structures of a poly(DB24C8) and b DN38C10. c Cartoon representation and partial structure of [3]MSR. Photographs of [3]MSR: d before and e after its treatment with H2O2. f Thermal stimulation of a preprogrammed system to assemble a colorful supramolecular polymer network.

With a cleaner version of [3]MSR (Figure 2e), we finally prepared a preassembled system by adding [3]MSR to a solution of DN38C10 and poly(DB24C8). It was rewarding to see that this caused no change in viscosity and very little change in color, meaning that the components did not interact strongly with one another in solution. Naturally, we next heated the system to disassemble [3]MSR and produce colorful SPNs. After a few days of heating, we observed the precipitation of a pale-yellow solid that was later identified as pure crosslinker. We found that heating in an unsealed vial not only caused release of the crosslinker but also allowed the uptake of water through the course of the experiment, favoring the crystallization of the crosslinker. We were able to solve this by equipping vessels with J. Young-type valves, which were excellent to prevent water intake and solvent evaporation. This was a very surprising issue we had to solve.

After much anticipation (and in the middle of 2020!), we were finally ready to assemble the prefabricated systems. Following the baking instructions (temperature and heating time), we were able to isolate a gel material that appeared deep red in color (Figure 2f). Heat caused (i) the disassembly of [3]MSR to release the flanking crown ethers and the crosslinker, (ii) threading of DN38C10 onto the bipyridium core to produce charge-transfer, and thus coloration; and (iii) threading of the rings in poly(DB24C8) onto the DBA+ units of the crosslinker to create a gel network. Like other preassembled materials, the formed gels are made-to-order, that is, the end-user may decide for how long to heat the system to access gels with the desired fluidity and color.

Although our chemical approach to preassembled materials was not straight sailing at all, we are proud to see that our original idea came to fruition, and we are excited to see what is to come when using metastable rotaxanes to harvest new applications in materials chemistry!

If you would like to see our whole journey in preassembled materials, the full article can be found here! 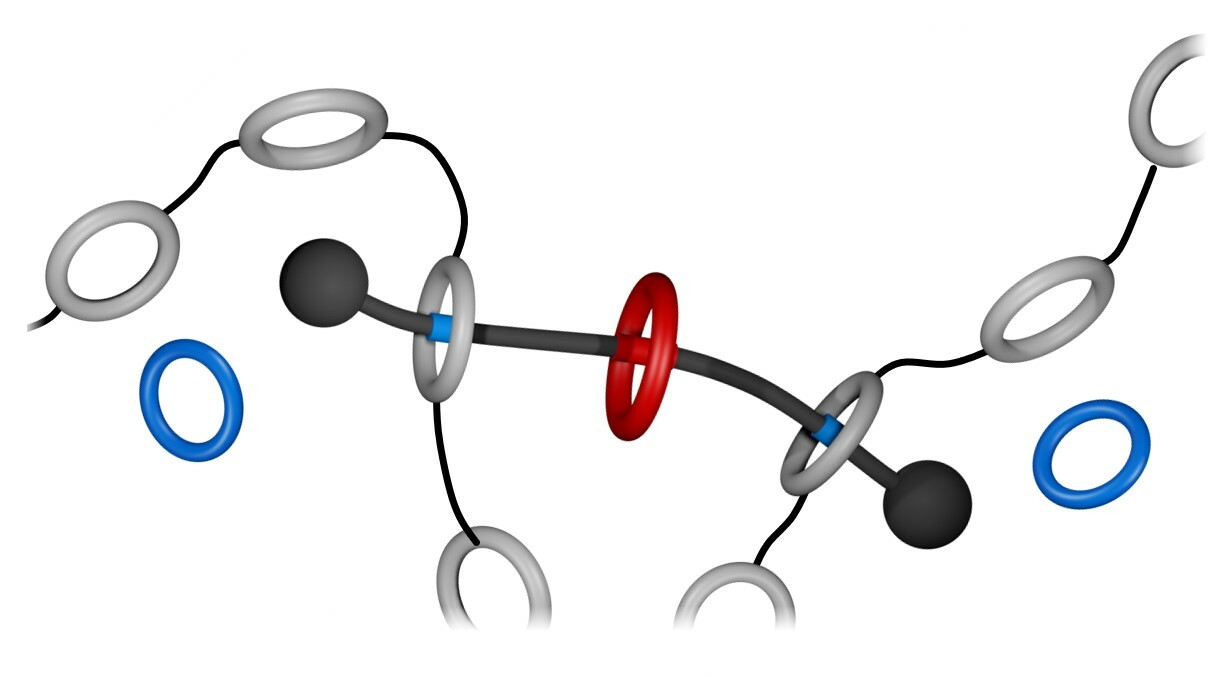