Disproportionation is a fundamental part of the character of any element, and it goes to the very heart of thermodynamic stability of oxidation states. 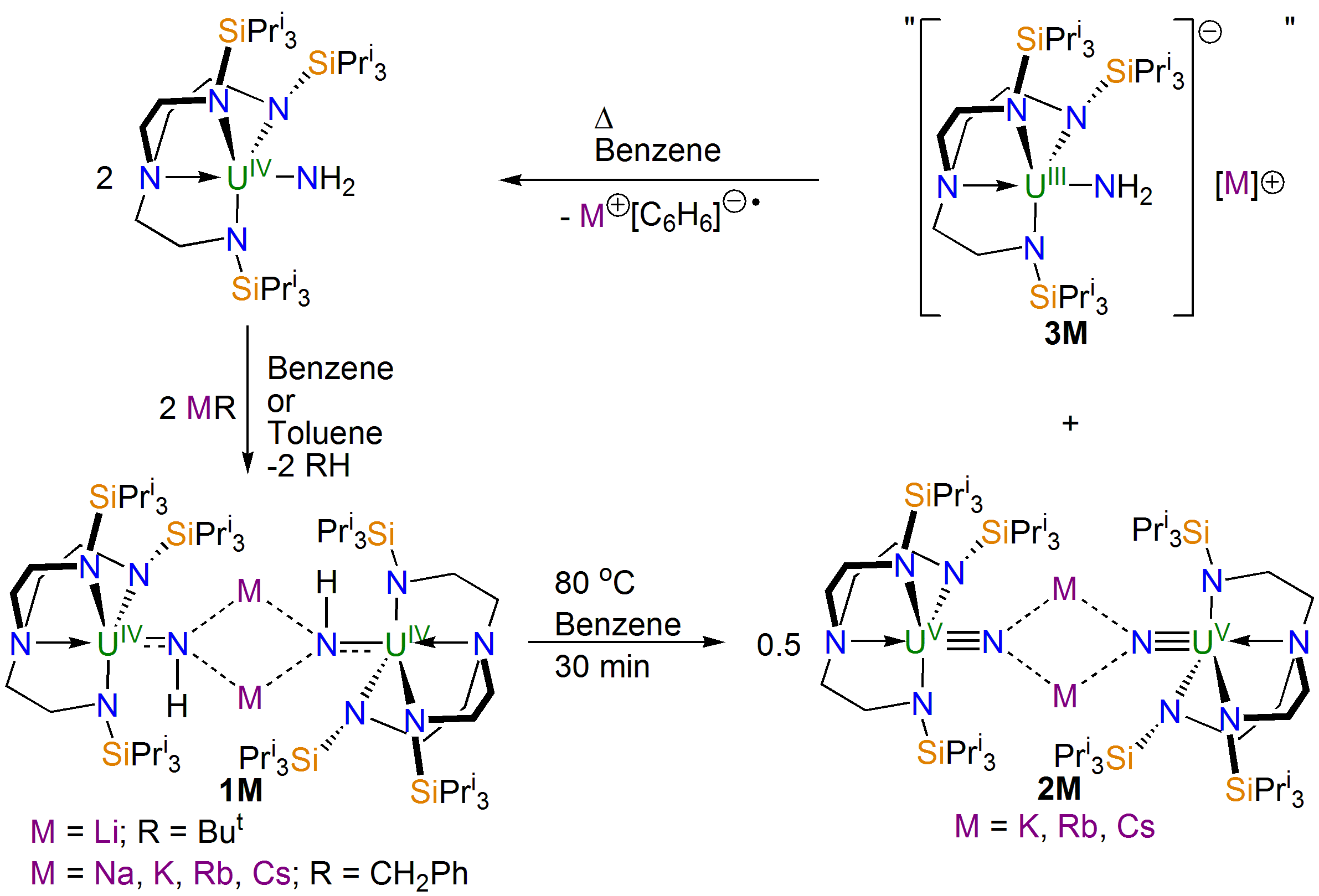 In 2014 the Liddle group reported alkali metal bridged parent imido dimer complexes of uranium (1M) shown in the scheme above, which ultimately provided an entry point to a terminal uranium parent imido complex. Subsequently, in 2019 the thorium dimer analogues of 1M were disclosed. In the course of those studies, we discovered that the thorium imido congeners of 1M, accessed by deprotonation of the parent amide, had to be prepared in benzene, because if prepared in toluene the thorium imidos are basic enough to deprotonate toluene and so they revert back to amide. In light of this, since 1M could be prepared in benzene or toluene, we decided to revisit the uranium imido dimers 1M and investigate their thermolysis in different solvent media (benzene vs toluene). To our surprise, this led to the discovery of an instance of U(IV) disproportionation (Eqn 3), reported in our recent paper in Nature Communications.

In 2016 the Mazzanti group reported U(IV) disproportionation, where a bridging diuranium(IV) nitride complex reacts with methyl-triflate to give a U(V) imido and a U(III) triflate complex. In one sense, conversion of nitride to imido is not surprising, but fundamentally the redox chemistry is that of Eqn 3 and so a highly notable singular example. In the recent paper that this blog is discussing, we discovered, as shown in the scheme above, a reaction that from a redox disproportionation perspective is also represented by Eqn 3, but it is the conceptual opposite of Mazzanti’s work in that the U(IV) imido complexes 1M can be converted to U(V) nitride (2M) and U(III) amide (3M) derivatives. Considering the prior difficulties encountered in accessing U(V) nitrides, the imido to nitride conversion is rather unusual, and that it is accessible simply by heating prompted us to investigate the reaction in detail. Interestingly, we found that these disproportionations only occur for potassium, rubidium, and cesium imido dimers, but not lithium or sodium congeners. Furthermore, when disproportionation reactions occur they do so only in benzene, and not in toluene. 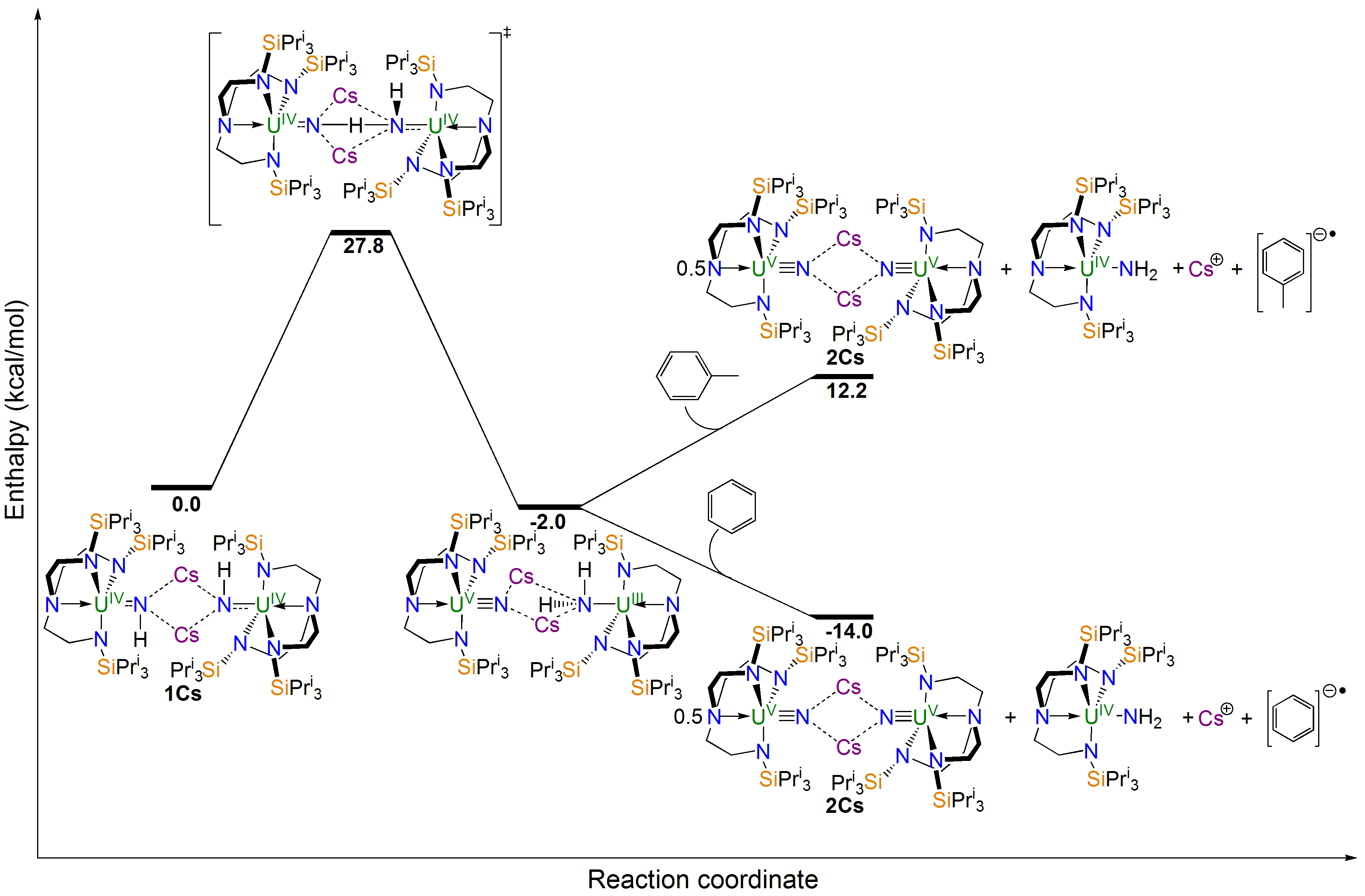 To explain our experimental observations, we turned to Laurent Maron at the University of Toulouse for computational investigations, and gratifyingly the experimental observations are independently reproduced computationally. The calculations reveal that the U(IV) disproportionations for the 1K/Rb/Cs analogues are kinetically and thermodynamically feasible, as shown in the example for cesium above, with the key dinuclear disproportionated U(V)/U(III) intermediates being identified revealing an inner-sphere hydrogen atom transfer mechanism for these reactions. The use of benzene emerges as a decisive factor, since it is ultimately reduced by the U(III) product 3M regenerating the U(IV)-amide starting material, whereas toluene resists this reaction, being more difficult to reduce than benzene, thus disfavouring the overall disproportionation.

In contrast to the reaction outcome when potassium, rubidium, or cesium are used, the analogous lithium and sodium reaction profiles show that all these intermediates and final products are kinetically and thermodynamically unfavourable irrespective of the solvent used, indicating U(IV) disproportionation cannot occur with the lithium or sodium derivatives. The surprising finding of these calculations is the appreciation of how a fundamental thermodynamic property of uranium has been manipulated by external factors from being unfavourable to favourable when the redox phenomena of uranium are usually at best kinetically suppressible.

The ‘hidden’ inner-sphere proton migration mechanism in our U(IV) disproportionation system involving H2N-, HN2-, and N3- ligands is reminiscent of well-known proton-promoted disproportionation of diactinyl(V) cation-cation complexes with isoelectronic and isolobal H2O, HO-, and O2- ligands in a range of extraction and environmental scenarios. It is interesting to note that the U(IV)-N and U(V)-O disproportionation combinations align with hard-soft-acid-base considerations, and there are many U(V)-oxo disproportionations but few U(IV)-imidos, so perhaps the latter has potential for elaboration.

The present work raises several questions. Are there indeed further examples of Eqn 3 with different ligand sets at uranium waiting to be discovered? If the fundamental redox properties of uranium are influenced the way this study indicates, what else could we manipulate through this influence? Does the redox chemistry described by Eqn 3 for uranium constitute a broadly applicable pattern that might emerge for transuranic elements and thus the early actinides more widely? What would this all then mean for the wider chemistry of uranium and the actinides? Time will surely tell, but one thing for sure is that whenever uranium gets pushed outside its comfort zone it continues to reveal fascinating new chemistry at a fundamental level.