Every day millions of computational hours are spent to simulate biological systems using Newton’s equations to discover new drugs and provide insight into experiments. What happened to quantum mechanics? Do we really need it or is it just an academic exercise for sophisticated scientists?

We went out of the beaten path and we have tried to answer these questions. Specifically, we wondered if quantum mechanics would have provided a different picture from the classical one for biosystems routinely simulated classically.

Recently we have developed a quantum method,1,2 based on semiclassical approximation,3 for quantum simulation of vibrational spectra and the vibrational ground and excited state Schroedinger wavefunctions for large systems, relying on computationally convenient classical trajectory simulations.4 For instance, we would be able to calculate vibrational eigenfunctions directly from quantum electronic structure simulations of ammino-acids. To start off, we chose glycine in its protonated form (GlyH+).

Having the eigenfunction of a system means knowing everything about it. However, how could we extract chemically meaningful information out of it? GlyH+ is a 27-dimensional function that is hard to represent and to get in its entirety. Moreover, we can compute also the excited states, which enriched further the analysis of the results. It was clear we got an incredibly amount of information, but we could not exploit it at the best yet.

Initially, we intended to underline the importance of zero-point energy contribution to the molecular structure, because this is a pure quantum effect. So, we calculated physical observables, such as equilibrium angles, bond distances, and dihedrals, using the ground-state quantum eigenfunction and compared them with the harmonic approximation. We did not find much of a difference between the classical bottom-of-the-well geometry and the quantum zero-point-energy configuration.

Then, we started to look for a better way to employ our wavefunctions, and eventually, we found inspiration from electronic structure calculations. Nobody would doubt about the quantum nature of electrons in molecules. These are treated in the electronic structure theory by quantum mechanics. However, instead of considering the electronic wavefunction, it is useful to look at the 3D electron density function. Why not treat the nuclei on the same ground and derive the nuclear densities for protonated glycine, instead of looking at its raw wavefunction? From this idea, our article journey took off.

Once we had the full nuclear density picture, we found that the “quantum-GlyH+” was indeed different. Representing with a 3D picture the difference between the harmonic and anharmonic ground state of protonated glycine we discovered it is a more flexible and distorted molecule with respect to the “harmonic-GlyH+”. Specifically, in “quantum-GlyH+” the ammonia umbrella protons are closer to each other, the C-N bond longer, the entire molecule elongated and more flexible than in the harmonic description.

Upon looking at the picture after the OH vibrational stretch excitation, interesting things happen. The normal-mode harmonic description derived from the classical bottom-of-the-well approximation shows the excitation as an incremented delocalization of the H and O atoms of the hydroxyl group alone. Contrarily, our quantum mechanical picture describes the implication of many other modes, especially the ones involving the amino group nuclei. Notably, we could quantify each mode contribution and we saw the most important ones are not originated from neighboring functional groups as one may think! This is the main result of our paper. 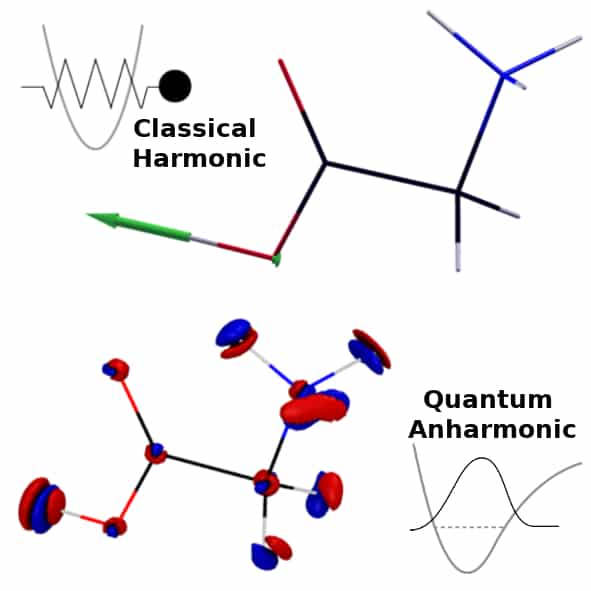 Initially, we did not realize the impact these results might have on the chemistry community. It was only after a spectroscopic meeting, where I presented the “quantum-GlyH+”, that we received very encouraging comments. We understood that the experimentalists in particular are interested in knowing which is the quantum picture. Specifically, they want to understand what is involved behind each spectroscopic peak, beyond the standard harmonic approximation.

This discovery of quantum mechanical effects in a complex system is part of an ERC-CoG project. Our group will keep investigating if quantum effects are present and important for our better understanding of everyday life compounds. 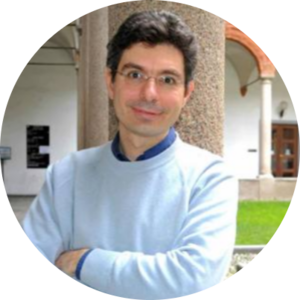 However, let me point out one of the issues most people have with 'quantum mechanics': semantics.

I was also wondering about this in the first part of your text, when you stated that you started by looking at physics 'observables' such as bond distances, etc. Which are of course a very classical picture of a molecule;-) Does the "distance of two atoms" operator correspond to a useful observable of a polyatomic molecule? Does it actually commute with the Hamiltonian?

The fact that nuclei are delocalized is obviously a very old concept, i.e., as old as quantum mechanics itself. It's observation goes back to (before) the umbrella inversion in ammonia and was, for instance, exploited and understood in the demonstration of the MASER by Townes and coworkers in the 1950s. A very instructive/pedagogical paper on this, with analytical 'descriptions' and many nice wavefunction & nuclear-density pictures is this article in the Journal of Molecular Structure (1972): https://dx.doi.org/10.1016/0022-2860(72)87050-9 (I am sure there are earlier and better depictions, but this one was instructive for me at some time;-)

Now, I still like your careful analysis of how far empirically adjusted classical physics can go for such quantum objects as molecules and look forward to more people realizing the need, opportunities, and beauty of (molecular) quantum mechanics.

Best wishes for pushing this forward:-)