Control of the electronic and steric properties of a Ru(II)porphytinate-based macrocycle in conjunction with formation of mechanical bonds enable the design of an endotopic promoter with extraordinary chemical selectivity in N-H and S-H carbene insertions regardless the substrate stoichiometry.

In the natural world, molecular confinement is Nature’s way to convert substrates efficiently and selectively into the chemical products essential to life. Over eons of evolution, Nature has developed extraordinary molecular hollow structures with well-defined nanometer-sized reaction environments designed to sequester and encapsulate specific chemical entities through molecular recognition to promote their chemical transformations partitioned from the bulk; the enzymes. Inspired by the natural blueprint, chemists have created elegant synthetic enzymatic models. Such systems are designed to create molecular architectures with well-defined cavities, in which catalytic centers are strategically positioned inside the nanoconfined space. From those studies, several phenomena, sometimes operating in concert, have been established, which are explored to speed up the desired reaction and/or to completely change the usual reaction outcome afforded from the same reactions when carried out in the bulk. Chemical systems that change the reaction outcome through molecular confinement have been called nanoreactors.

As part of our research program, we have developed porphyrin-based molecular hollow structures for the syntheses of mechanically-linked molecules. One example of those structures is the cyclic Ru(II)porphyrinate with a diphenylcarbene external axial ligand 1 (Figure 1). The main property of 1 is its ability to promote carbene insertion reactions from diazo derivatives inside the central cavity exclusively. Investigating 1 as the catalytically-active ring component for rotaxane assembly processes from the proper half-threads through carbene N-H or S-H insertions as the irreversible chemical step that connects the molecular pieces in the interlocked fashion, we found surprising results. Firstly, 1 is quantitatively incorporated into rotaxanes in the presence of a large excess (10x) of an equimolar mixture of half-threads, which are completely recovered as starting materials after reaction workup. No side reactions such as nucleophilic attack to the diphenylcarbene axial ligand by the amine or thiol half-threads, dimerization of the carbene intermediates due to the large excess of the diazo half-thread in the medium nor intercomponent reactions promoted by the rotaxane itself, all of which were expected under our experimental conditions, were observed in our experiments.

Spectroscopic investigation of the rotaxane assembly process revealed that the amine or thiol groups on the half-threads coordinate to the Ru(II) ion inside the cavity to yield the respective hexacoordinated complexes prior to the formation of the carbene intermediate. The thiol hexacoordinated complex is labile at room temperature, while the amine analog is at 60oC. Such lability of the hexacoordinated complexes informs that the amine and thiol half-threads enter and leave the Ru(II) ion coordination sphere quickly, thereby creating a local concentration of those chemical functionalities near the central cavity (Figure 2). As soon as the diazo half-thread has the chance to reach the Ru(II) center, the carbene intermediate is formed after extrusion of a N2 molecule. The higher local concentration of N-H e S-H groups near the Ru(II) ion speeds up the insertion reactions, which are now faster than the deleterious carbene dimerization side reaction. 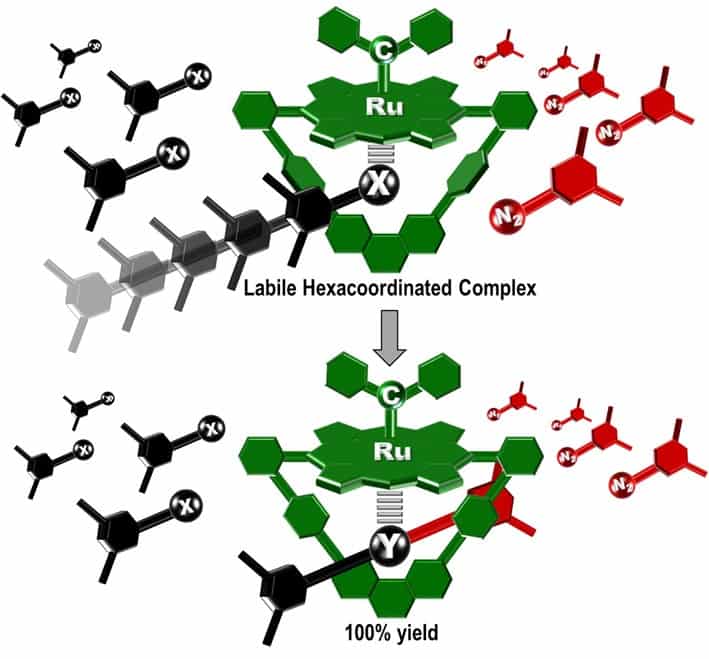 After formation of the rotaxanes, the secondary amine or thioether groups on the thread are coordinated to the Ru(II) ion on the ring. Such intercomponent interactions shut down the Ru(II) ion activity, therefore avoiding the turnover of the cyclic promoter and subsequent intercomponent side reactions. Running the same experiment with the acyclic version of the Ru(II)porphyrinate as promoter (Figure 3) yields the expected dimer, thioether, secondary and tertiary amine threads, thereby demonstrating that 1 functions as a nanoreactor and alters the product distribution of carbene insertions. Such chemical features of 1 are reminiscent of natural enzymes and will allow us to prepare soon the elusive mechanically-linked polymers and copolymers with well-defined structures and narrow molar mass distributions. 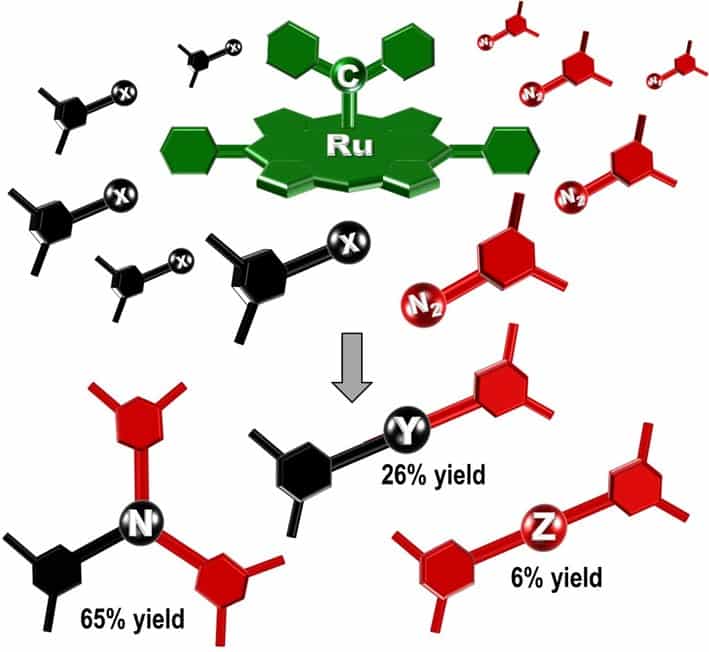 Figure 3 – Schematic representation of the carbene insertion reactions promoted by the acyclic version of 1. The lack of central cavity in the promoter and no formation of mechanical mechanical bonds in the products allow the Ru(II)porhyrinate center to turnover, which leads to total consumption of the diazo substrate to afford the expected mixture of products from mono and di (for the case of the half-thread-NH2 derivative) carbene insertions as well as carbene dimerization. N = tertiary amine group (R-N-(R’)2); X = primary amine (R-NH2) or thiol groups (R-SH); Y = secondary amine (R-NH-R’) or thioether (R-S-R’) groups; Z = olefin functionality (R-CH2=CH2-R) afforded from the carbene dimerization side reactions. 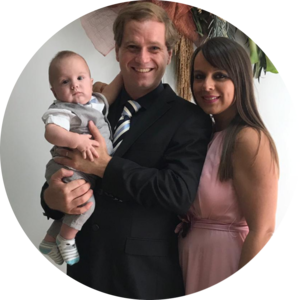