Light-activated processes are found everywhere in day-to-day life, from photovoltaic materials such as solar panels to small molecules used for bioimaging in hospitals. Nature has a plethora of light-driven processes, also known as photoactive processes, that transfer light energy into a physical response, such as in photosynthesis and vision, typically driven by a photoactive protein. Sitting at the heart of these photoactive proteins are chromophores, which are small molecules that absorb light and undergo small-scale transformations that get translated to the protein and result in macromolecular processes. Understanding the intrinsic electronic properties of these chromophores is essential for the rational design and improvement of photomaterials for a range of applications.

The Green Fluorescent Protein (GFP) is a bioluminescent protein, illustratively shown in the image above, that has revolutionised the life sciences as one of the most widely used in vivo fluorescent tags. One reason for this is the high quantum yield, ɸ = 0.79 (a measure of the efficiency of photon emission) for the process that produces its characteristic green colour after absorption of blue light. One of the most direct methods for studying the electronic properties of molecules is photoelectron spectroscopy (PES) which measures the electron binding energies. PES allows us to measure the energies of the electronic states within a molecule, and how they change when the molecule undergoes a transformation. Measuring intrinsic electronic properties of molecules is commonly performed  in the gas phase, in the absence of an  environment; however, understanding the role of an environment on the electronic structure is crucial for designing new photomaterials..

Previous studies have shown that the first absorption band in the electronic structure of GFP and the isolated chromophore, 4-hydroxybenzylidene-1,2-dimethylimidazolinone (p-HBDI) in gas phase are remarkably similar, which led to the assumption the protein environment provides a similar electronic environment to that observed in vacuum. Higher lying electronic excited states of GFP have been linked to photooxidation processes and the formation of solvated electrons. However, until now, the electron detachment energy, the most fundamental property that underpins photooxidation processes, has only been recorded in the gas phase. Using liquid-microjet photoelectron spectroscopy, with UV laser pulses, we have been able to measure the electronic detachment energy of the GFP chromophore in aqueous solution.

We found that the electron detachment energy in aqueous  solution was more than twice the energy of that found in the gas phase, and lies much closer to the value predicted for the protein. Although the electronic excitation energy of the first excited state is found to be similar in the protein to vacuum, we have found that higher lying excited states, critical in photooxidation processes, lie much closer in energy to those found in the chromophore in aqueous solution. From this, we propose that the photooxidation processes involved in the protein will closely resemble those found in the chromophore in aqueous solution.

For more information, have a look at our publication: 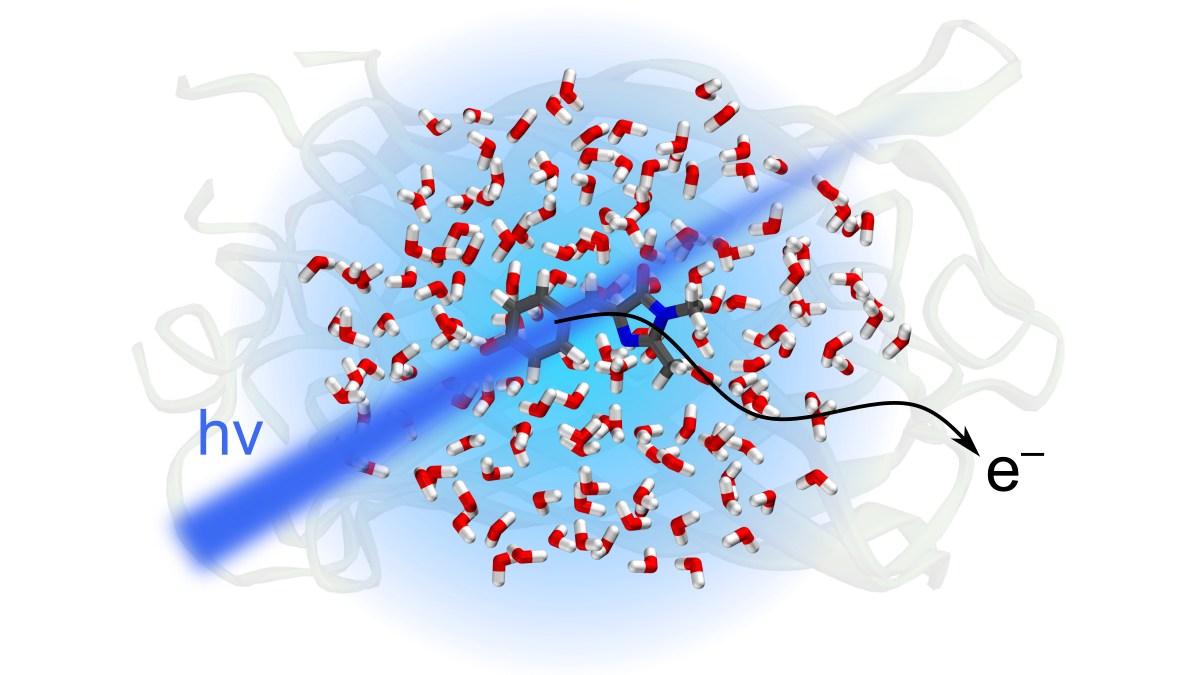