Light is crucial to a whole host of processes, from photosynthesis to solar panels and smart materials. In our latest publication, we demonstrate a new and easier approach to illuminating NMR samples, enabling science to shine a light on, and develop more and more useful photosensitive systems.
Jack Bramham and Alexander Golovanov
2 contributors
Like Liked by Evelina Satkevic and 1 other
0

In situ illumination of liquid-state NMR samples allows to characterise light-dependent chemical and biological phenomena, but, in practice, the position of an NMR sample deep within the bore of a spectrometer magnet renders such illumination challenging. Here, the authors demonstrate the working pr…

Humans have long recognised the power of light, with the sun worshipped by many for thousands of years. We have always tried to harness and control light for our needs, from illuminating the inside of dwellings via simple openings during the day, to using fire as a light source at night. Our use of light has evolved, from candles and oil lamps to modern electrical lighting, and continues to evolve, for example, through the use of light in optical fibres which connect the world via the internet, or harvesting of the sun’s energy by solar panels. Light also acts as an ideal control system for emerging nanoscale and molecular technologies, including targeted treatments for cancer in photodynamic therapies, smart materials, and efficient and cheap production of chemicals and drugs using enzymes.

To develop these new technologies, we need high-resolution analytical techniques to probe the response of new molecules and systems to light. Nuclear magnetic resonance (NMR) spectroscopy is one of the favourite analytical techniques of chemists, biologists and material scientists. It allows the chemical structure and behaviour of molecules to be studied using a strong magnetic field and radio waves. However, the inside of the vast majority of NMR spectrometers remains a dark and unlit place, with the design of the large superconducting magnets making illuminating NMR samples challenging. Historically external LASERs and lamps, and recently light emitting diodes (LEDs), have been coupled to optical fibres, routing light towards the sample inside the narrow and long spectrometer bore. However, our experience with these unwieldy and sometimes fragile fibre optics led us to develop a new system for illuminating NMR samples. This system is easier and more efficient, and so hopefully may be adopted by many other research groups.

Our approach, which we call ‘NMRtorch’, consists of two main components, a ‘torch’ which is inserted directly into the bore of the spectrometer, and a special sample tube with thick light-conducting walls. The NMRtorch houses an array of LEDs, with any possible combination of ultraviolet, visible and infrared wavelengths, and these shine light directly onto the rim or transparent cap of the sample tube. Light enters the walls of the tube, and travels within its walls, before being scattered by a special etched portion of the tube and illuminating the NMR sample. Thus light can travel along the long and narrow spectrometer bore without the use of cumbersome fibre optics, and illuminate the sample from the outside.

In this first demonstration of the NMRtorch approach, we show that it can be used to deliver high intensity uniform illumination to liquid-state NMR samples. We also show that the ability to combine controlled illumination from multiple wavelengths allows the amount of light entering the sample to be easily quantified in a single sample of a convenient chemical actinometer. This is important as it allows reaction rates and molecular dynamics to be calibrated against light intensity. Finally, we apply our approach to a number of typical photo-NMR experiments, including enhancing NMR signals to detect low concentration species using photo-chemically dynamic nuclear polarisation (photo-CIDNP), and studying the conformational photoswitching behaviour of azobenzenes, which may be incorporated into smart materials.

Our approach can be used in any typical solution NMR spectrometer, without the need to modify expensive and complex NMR probes, or use fiddly optical fibres. This means scientists can easily illuminate NMR samples using a wide range of light wavelengths, while simultaneously characterising a systems behaviour by the powerful analytical technique. The molecular processes underlying a whole host of systems can be studied and further optimised – for example, making more efficient solar batteries, recycling plastic waste, and targeting drugs to specific organs. Ultimately, we are continuing what humans have always been doing – bringing light into dark places. 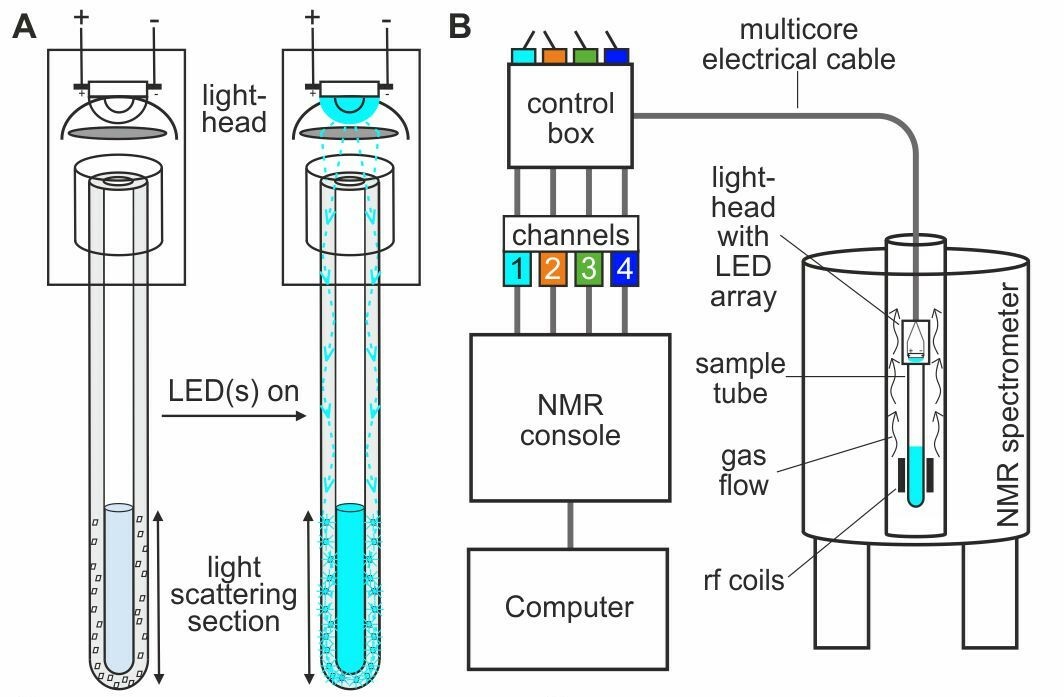 Light is crucial to a whole host of processes, from photosynthesis to solar panels and smart materials. In our latest publication, we demonstrate a new and easier approach to illuminating NMR samples, enabling science to shine a light on, and develop more and more useful photosensitive systems.