Actinide-actinide bonding in readily isolable complexes has been a longstanding goal of synthetic actinide chemistry. Now an example has been reported, and it isn’t remotely what was expected.
Steve Liddle
Professor and Head of Inorganic Chemistry, The University of Manchester
Follow
Like Be the first to like this
0

A crystalline cluster exhibits thorium–thorium bonding, adding to our knowledge of actinide–actinide bonding.

In the thorium-cyclobutadienyl study mentioned above, we found that ThCl4 is seemingly over-reduced to colloidal thorium or sub-valent halide combinations when treated with [K2C4(SiMe3)4] (K2CbTMS), whereas treatment of [Th(C8H8)2] with K2CbTMS gives the aforementioned actinocene [Th(CbTMS)(C8H8)] as a co-complex with the K2C8H8 by-product. We were struck by how the ionic ThCl4 was uncontrollably reduced, but the more covalent [Th(C8H8)2] engaged in mild ligand substitution, something we had anticipated on the basis that the four-membered-ring Cb dianion is more charge-dense than the eight-membered-ring C8H8 dianion so the former ought to displace the latter from a metal. This then naturally posed to us the question of what about the intermediate combination of [Th(C8H8)Cl2]? Would this complex reduce, or would exchange of C8H82- and/or Cl- ligands occur, or would something else entirely different happen? We therefore prepared [Th(C8H8)Cl2(THF)2] and tested its reaction with K2CbTMS. The result was most surprising, see scheme below, and turned out to be well-defined reduction and isolation of a complex that exhibits σ-aromatic thorium-thorium bonding utilising 6d-orbitals. This needed a team of synthetic, spectroscopic, magnetometric, and computational chemists based at Manchester and Stuttgart universities to skilfully unpick and understand, and the result is the paper published in Nature that this blog discusses.

For context, it is worth noting that the field of metal-metal bonding is vast after nearly 180 years of synthetic endeavour. It spans almost all the Periodic Table, with many types of metal-metal bonds in the s-, d-, and p-blocks now routinely prepared and isolated. However, the f-block presents a rather different picture, and whilst elegant species such as U2, Th2, and U2H2 have been observed spectroscopically, or studied whilst trapped in cryogenic frozen noble gas matrices or endohedral fullerenes, it was the case that there were not any actinide-actinide bond complexes that could be routinely prepared and isolated under normal preparative conditions in large quantities. Compounding the challenge of the area, though many theoretical predictions had been made, almost all of which quite understandably followed the traditional localised single and multiple bond models from the d-block, making predictions in relativistic regimes is challenging to say the least and so the predictions remained experimentally unverified.

The first clue that something unusual had been produced from the reaction of [Th(C8H8)Cl2(THF)2] with K2CbTMS was the observation of the dark blue colour of the product that is usually indicative of low-valent thorium ions. Indeed, crystallographic analysis of the dark blue product revealed [{Th(C8H8)Cl2}3]2- units, see figure above, charge-balanced by two {K(THF)2}1+ units. The K ions originate from the K2CbTMS and neutral CbTMS was detected in the reaction mother liquor indicating that, consistent with the dark blue colour, something, likely thorium, had been reduced.

At first, we did not anticipate that thorium-thorium bonding would be present in this tri-thorium cluster, and expected to find open-shell isolated thorium(III) ions, but all regular and broken-symmetry calculations collapsed to or pointed to a closed-shell formulation. Indeed, the best experimental-computed match was a closed-shell σ-aromatic formulation, where two spin-paired electrons sit in the middle of the Th3Cl6 unit, see molecular orbital figure above for the central [{Th(C8H8)Cl2}3]2- unit. As can be seen, this happens to be the spot where three thorium 6d orbitals all point towards and overlap, and Quantum Theory of Atoms in Molecules modelling finds all the relevant bond, ring, and cage critical points. Quite reassuringly, the computed TD-DFT spectrum of this σ-aromatic formulation is consistent with the observed dark blue colour. Furthermore, the computed thorium-thorium stretches are in almost perfect agreement with the Raman spectroscopic data. Magnetometry and EPR spectroscopic studies showed only trace paramagnetic impurities, meaning the bulk is diamagnetic as the σ-aromatic formulation requires. The calculations are consistent with multiple independent experimental structural, spectroscopic, and magnetic measures, and hydrides were experimentally and computationally ruled out. Lastly, NICS analysis found isotropic magnetic shielding consistent with the presence of σ-aromatic bonding. The inescapable conclusion was thus that the tri-thorium cluster contains σ-aromatic thorium-thorium bonding.

Electronic structure characterisation is just one way of understanding metal-metal bonding. Another important approach is to test the reactivity. In preliminary work, we have found 8-electron reductions of the tri-thorium cluster with excess CO2 to make carbonate salts by reductive disproportionation of CO2, whereas neutral C8H8 reacts in a 2-electron reaction to give [Th(C8H8)2]. Thus, this σ-aromatic system demonstrates variable multi-electron redox chemistry that parallels the extensive small molecule redox chemistry of low-valent uranium.

The tri-thorium cluster can be prepared and isolated, meaning it has potential to be elaborated in terms of derivatives and reactivity. In particular, now this cluster has been isolated and studied, this begs the question as to whether uranium-uranium, and other actinide-actinide bond combinations will prove accessible. It turns out that regular heterogeneous reductants can also produce the tri-thorium cluster, but only in trace quantities that can be missed as decomposition occurs during the long reaction times. The realisation that homogeneous K2CbTMS gives quick reactions where the tri-thorium cluster can be isolated in high yield, where otherwise it would have been missed, begs the question of whether other actinide-actinide bond complexes have been missed before but now might prove to be accessible and isolable. This also points to the wider potential utility of K2CbTMS as a deliberate homogeneous reducing agent.

It is striking that the first isolable example of thorium-thorium bonding that does not rely on a trapping strategy does not have the regular localised single or multiple-bonding motifs common to the d-block, and indeed that was the focus of prior theoretical predictions. Instead, less-common σ-aromatic bonding manifests – perhaps it was always going to be the case than when actinide chemistry started to catch-up with s-, d-, and p-block metal-metal bond chemistry it was not going to follow the traditional path, and indeed the σ-aromatic bonding in the tri-thorium cluster extends σ-aromatic bonding to a high of principal quantum number six and to the seventh row of the Periodic Table. With hindsight, in a funny kind of way it is to us actually quite reassuring that when finally isolated and understood the thorium-thorium bonding that we have discovered is something quite different to the norm of the d-block, so we look forward with excitement to see what further surprises this area has in store for us next. 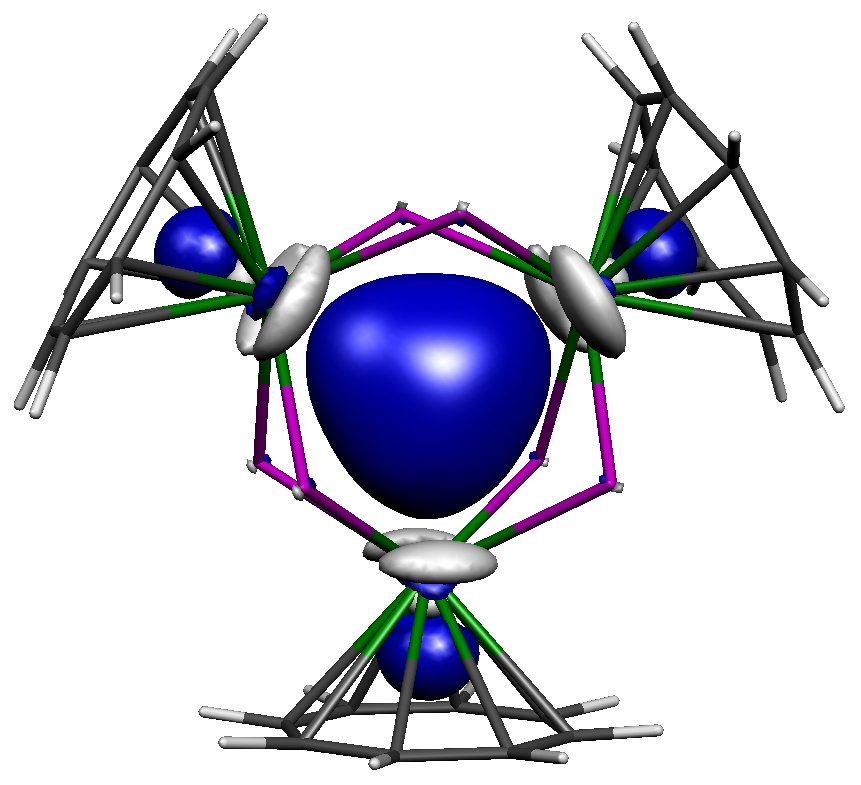 Actinide-actinide bonding in readily isolable complexes has been a longstanding goal of synthetic actinide chemistry. Now an example has been reported, and it isn’t remotely what was expected.