Materials research is full of “smart” material – chemical compounds capable to imitate conscious behavior in the response to the external stimulus. “Smart” photocatalysts can distinguish between colors of photons and as a result to enable a specific reaction.

There are only few thermodynamically stable binary compounds of hydrogen and oxygen under the standard conditions – water and hydrogen peroxide. Therefore, photocatalytic splitting of water gives H­2 and O2 (and potentially H2O2 as the product of follow up 2e‒/2H­+ reduction of O2). From this standpoint, photocatalytic water splitting by its nature is a very selective process. The wavelength of incident photons affects the yield of H2 and O2 and in general correlates with the absorption spectrum of the semiconductor, but no other products are generated.

The situation becomes more complex when organic molecules are used as reagents instead of water in photocatalysis. Due to the presence of several structural units, such as functional groups and bonds having different dissociation energies, several reaction pathways are potentially feasible for an organic molecule. Energetics of the reaction pathways determine whether one (selective process) or several of them (nonselective process) are enabled under the certain experimental conditions.

It is a unique feature of photocatalysis to enable selectively one reaction pathway for a given molecule out of several potentially possible by using photons of specific wavelength. A concise term that describes such feature of photocatalytic system is a "chromoselective catalysis”.Ref1, Ref2, Ref3

In photocatalysis, the energy of a photon is converted into a thermodynamic potential, a driving force, for electron transfer between a semiconductor and a reagent molecule. To realize chromoselectivity in photocatalysis, we need a semiconductor capable to create a driving force with the magnitude proportional to the energy (the wavelength) of the absorbed photon. A good candidate for such role is potassium poly(heptazine imide) (K-PHI) – a carbon nitride semiconductor. In the UV-vis absorption spectrum of K-PHI, two bands are present.

The absorption band stretching from near UV up to ~460 nm is due to electronic transitions between the valence band and the conduction band (VB-to-CB) and defines the intrinsic band gap of carbon nitrides. Absorption edge that extends from ~460 nm up to 800 nm is due to electron transitions between orbitals having non-bonding character (nitrogen lone-pairs perpendicular to the p–conjugated structure) and the conduction band. In the band structure of K-PHI such transitions are depicted as intraband states (IBS) located close to the edge of the valence band (see below).

The recent project that we published in Angewandte Chemie started with the idea to synthesize aryl sulfonylchlorides from thiophenols using K-PHI as the photocatalyst. Given that optical gap of K-PHI is 2.7 eV, blue (465 nm) photons were the natural choice. While screening the reaction conditions, under green (525 nm) or red (625 nm) light, Yevheniia, the first author, obtained diphenyldisulfide. Under UV (365 nm) or purple (410 nm) the major product was chloroarene. Except the wavelength of photons, other conditions were exactly the same.

The reason for chromoselective behavior of K-PHI in oxidation of thiophenols is explained by selective excitation of electrons from the valence band to the conduction band (VB-to-CB transitions) or electrons from the intraband states to the conduction band (IBS-to-CB transitions) under illumination with photons having short and long wavelength respectively. 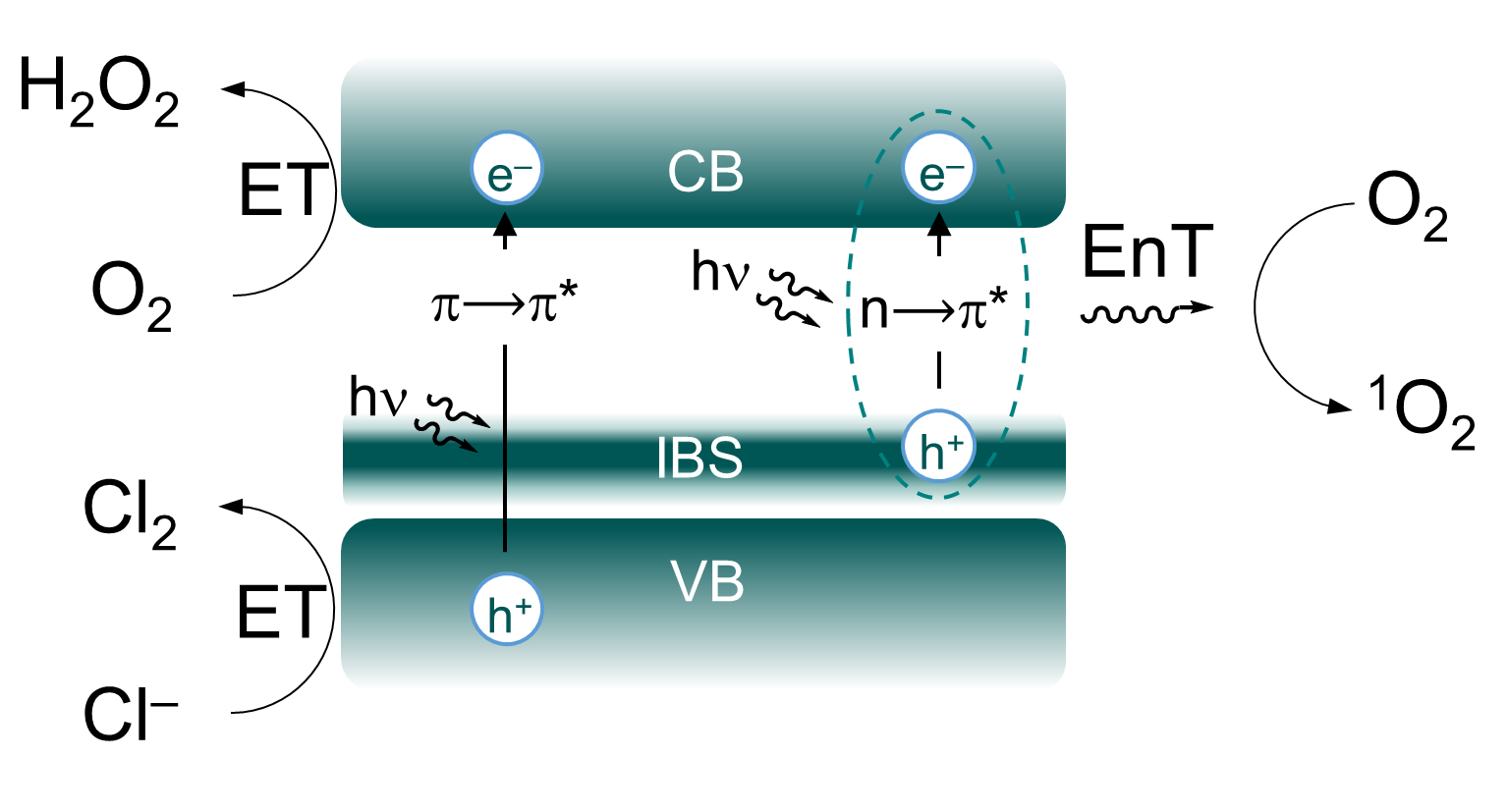 The chosen wavelength affects the concentration of the active species in the reaction mixture, namely “active chlorine”, H2O2, 1O2, which in turn enable formation of one out of three possible products from thiophenol. More rigorous evidences are in our open-access article.

By combining a more complex compared to water molecule, such as thiophenol, with a “smart” material capable to “distinguish” between the photons of different wavelength, we can control formation of the desired product.

Follow us on Twitter to stay up to date in carbon nitride organic photocatalysis @AleksandrSavat3, @markushyna, @InnovativMPIKG!