Light-driven catalytic hydrogen evolution is a key sustainable energy technology. Typically, solar hydrogen is only produced under irradiation. Now, a single molecule is reported which is capable of light absorption, charge storage and hydrogen release on demand, even in the dark.
Carsten Streb and Sebastian Amthor
2 contributors
Liked by Evelina Satkevic

Decoupling the processes of light harvesting and catalytic hydrogen evolution could be a potentially important step in storing solar energy. This has now been achieved with a single molecular unit: a light-harvesting ruthenium complex–polyoxometalate dyad that absorbs light, separates and stores cha…

Increasing effects of climate change have forced our society to transition to a post-fossil fuel economy based on net zero carbon dioxide emissions. Solar irradiation is considered as a prime alternative energy source which is globally available and virtually inexhaustible. However, diurnal variations of solar energy flux and large geographic differences in sunlight availability require efficient means of harvesting and storing solar energy for later release when required. Energy storage in “solar hydrogen” generated by splitting of water into H2 and O2 is a prime approach to address this challenge. However, major efficiency losses are linked to generation and storage of “solar H2”, so that alternative routes, where hydrogen is produced on-demand are important research targets. One way is the coupling of photovoltaics with batteries and water electrolyzers to enable on-demand electrochemical release of H2. However, each energy conversion step is linked with efficiency losses which accumulate and make the overall process economically non-viable. An alternative is the development of systems which combine light-absorption, charge-storage and on-demand hydrogen release.

Here, we report the first example of a single molecular unit which is capable of performing all the required steps. To achieve this, we covalently linked a phosphonate-functionalized tris(bipyridine)ruthenium(II) light-harvesting complex with a Dawson polyoxometalate (POM), [α2-P2W17O61]10–,which operates as charge-storage site and hydrogen evolution catalyst. In consequence, we obtained a Ru-POM dyad, see Figure 1.

Initial photostability studies showed, that under irradiation with visible light, the covalently linked Ru-POM dyad is significantly more stable than the individual, non-linked components. This is an important feature to facilitate long operational times under harsh irradiation conditions. Subsequent studies showed that in the presence of a sacrificial electron donor, e.g. ascorbic acid, the light-driven transfer of two electrons from the Ru photosensitizer to the POM is possible. This can easily be assessed by following the emergence of characteristic intervalence charge transfer (IVCT) bands which are indicative of the POM reduction state (Figure 2). Note that without light, no reaction between the electron donor and the PS-POM dyad occurred.

Detailed mechanistic insights into the light-induced processes were obtained by ultrafast time-resolved optical spectroscopies, which revealed rapid electron transfer from the PS towards the POM, which indicates excellent electronic communication between the two covalently linked subunits. In the current system, two electrons can be stored per POM unit, as the reducing power of the Ru photosensitizer is not high enough to transfer a third electron (which would in principle be possible). Future works will therefore focus on linking more reducing photosensitizers to the POM. The resulting reduced PS-POM dyad solution can be stored for extended periods of time (> 24 h), demonstrating that essentially, the system represents a storable liquid solar fuel.

To release usable energy carriers from the system on-demand, we reacted the reduced PS-POM dyad solution with a proton source, e.g. sulfuric acid. This led to the instantaneous release of hydrogen as determined by gas chromatrography. The Ru-POM dyad was fully re-oxidized as shown by time-lapse UV-Vis spectroscopy (Figure 2). Quantitative analyses showed that only 40 % of the calculated maximum amount of H2 were released, which indicates that currently unknown side-reactions affect the hydrogen release efficiency. Operando studies are underway to identify these processes, so that optimized systems with improve performance can be designed.

Our study shows that the combination of light-harvesting, energy storage and on-demand solar fuel production in one molecular system is possible. The Ru-POM dyad can serve as a blueprint for molecular devices with minimal requirements for implementation into solar fuel storage and distribution.

This work was performed within the collaborative research center CataLight. For related work, see our website www.catalight.eu 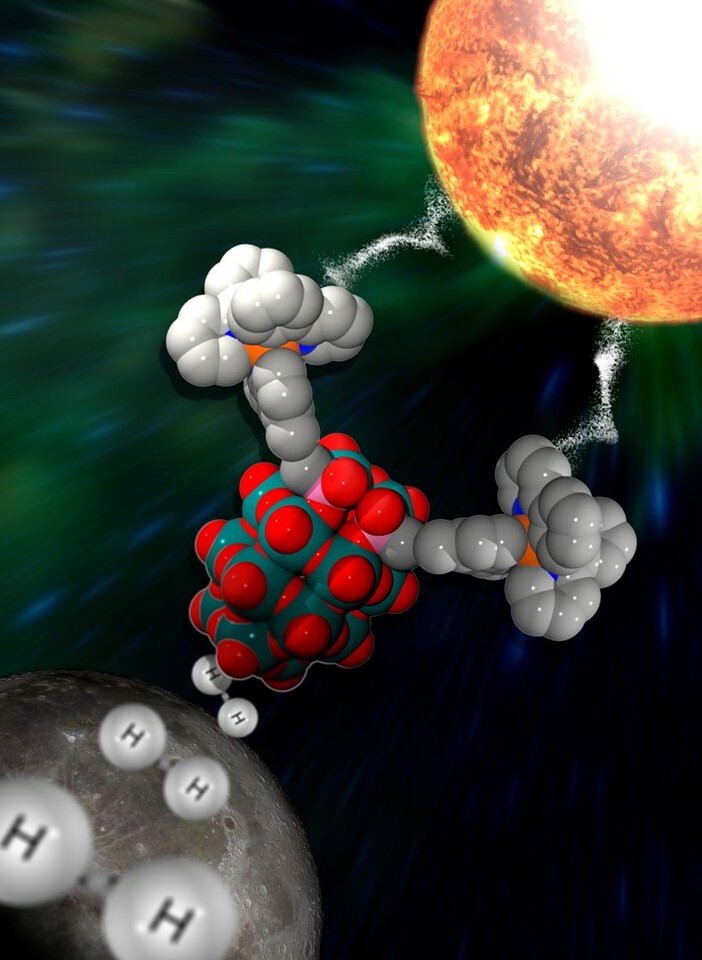 Light-driven catalytic hydrogen evolution is a key sustainable energy technology. Typically, solar hydrogen is only produced under irradiation. Now, a single molecule is reported which is capable of light absorption, charge storage and hydrogen release on demand, even in the dark.