Ribonucleic acid (RNA) has several critical functions inside cells. Although messenger RNA (mRNA), especially in light of the corona pandemic and the vaccines from Pfizer and Moderna, is receiving the most attention recently, RNA is known to have much more diverse functions than being a mere template for protein synthesis. tRNA and rRNA are heavily involved in protein synthesis, with the latter also showing catalytic properties, and small RNAs, such as siRNAs or microRNAs, play important roles in the cellular host defense system. This plethora of functions is enabled by a large number of modified nucleobases incorporated into these RNAs post-transcriptionally. More than 150 modified nucleobases are known nowadays, with the number still increasing every year. The biological pathways leading to these modifications can be quite complex, and defects in these pathways are increasingly recognized as drivers for severe diseases. 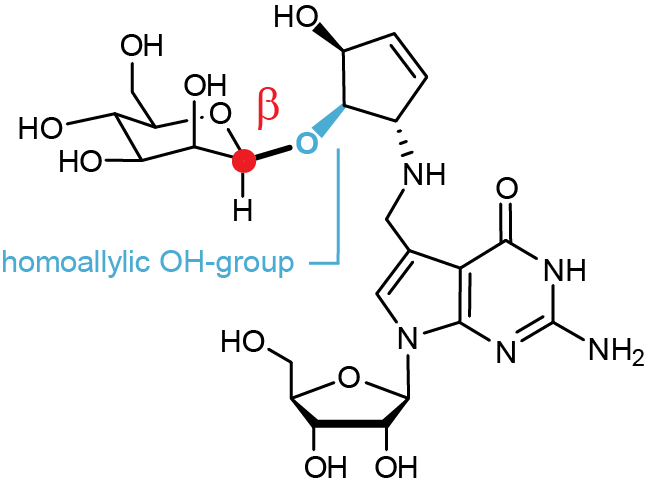 Figure 1: The previously reported structure of mannosyl-queuosine (manQ) based on NMR studies of isolated material. It features a mannose with a β-glycosidic bond to the homoallylic hydroxy group of the cyclopentene ring moiety.

One of these modifications, mannosyl-queuosine (manQ), a derivative of queuosine, was especially interesting to us. Although manQ is one of the most heavily modified nucleosides ever found, little is known regarding the function of this nucleoside that is also present in human cells. Our robust synthetic route towards queuosine published in 2007, together with the first total synthesis of galactosyl-queuosine in 2020, put us in a unique position to tackle a new challenge. In order to understand manQ’s function, we set out to synthesize this nucleoside, whose structure was already reported in a heroic effort in 1976 by Kasai et al. At that time, they extracted the manQ compound from 50 kg of rabbit liver. However, in our first attempt, when we synthesized the compound reported in literature and compared it to the natural material by LC-MS-co-injection, we found to our great surprise that we had synthesized a different compound than the one that is actually inside our cells. Realizing that the structure proposal made for this molecule must be incorrect, we set out on an odyssey to evaluate possible alternative structures.

Figure 2: Our approach for structure elucidation of manQ: well-defined synthetic manQ was co-injected on a LC-MS-System with natural manQ obtained by digestion of total RNA from mouse liver tissue.

From high resolution mass spectrometry, we knew that the natural manQ (let’s call it xQ for now) must be a structural isomer of the originally reported structure. We started off by actually ruling out that xQ is not bearing one of the other possible isomeric hexoses (glucose, galactose, …), but is indeed mannosyl-queuosine. For this, we fed several isotope-labelled sugars to cells, and checked which of these sugars is preferentially incorporated into xQ. Without going into much detail here, we could show that it is indeed mannose which is attached to queuosine in xQ. Therefore, we can safely term the natural compound manQ from here on. This did however not solve our problem yet. We reasoned that if mannose is the correct sugar, something with the regio- or stereochemistry of the originally proposed structure must be wrong. The first structure proposal was based on NMR spectroscopy of natural material, and the differentiation of α- and β-anomers is known to be tricky especially for mannosides. Here, the coupling constant between the hydrogen atom at the anomeric center and the adjacent hydrogen in 1H-NMR does not give an unambiguous clue about the sugar conformation. Hence, we first set out to synthesize the α-anomer of the originally proposed molecule. To our disappointment, however, after carrying out the 31 steps necessary to synthesize this compound, it again did NOT show a signal overlap with the natural compound in a LC/MS co-injection experiment. This left us with another reasonable option: the correct structure could be a regioisomer of the originally proposed structure. 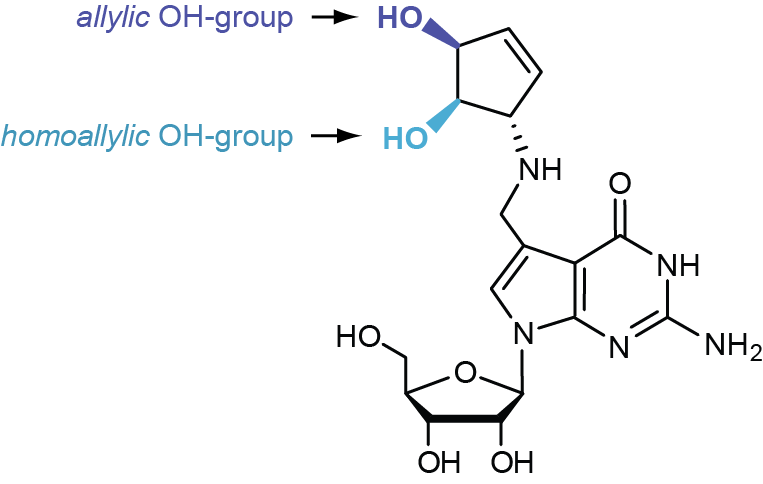 So, this time we set out to synthesize the regioisomer of manQ, in which mannose is attached to the other, allylic hydroxyl group of the cyclopentene moiety, again both in its α- and β-form. And while the β-allyl-isomer was relatively easy to synthesize, the α-allyl isomer proved to be challenging, mostly due to the instability of this isomer upon several deprotection conditions. However, after solving this issue by applying the right protecting group strategy, we were finally successful: We could prove that it is in fact a manQ nucleoside containing the α-anomer of mannose, where mannose is attached to the allylic hydroxyl group, that is present in mammalian cells. Having the correct compound in hand, we now can start to learn more about the biological function of this enigmatic RNA nucleoside, as planned from the very beginning. Last but not least, our results show, how total synthesis, cell biology and mass spectrometry can work together to solve tricky biological questions. This outcome, the correction of the previously reported manQ structure, was certainly not what we set out to do when we started our synthetic efforts, but sometimes when doing science, you find things along the way which you would have never expected in the beginning. 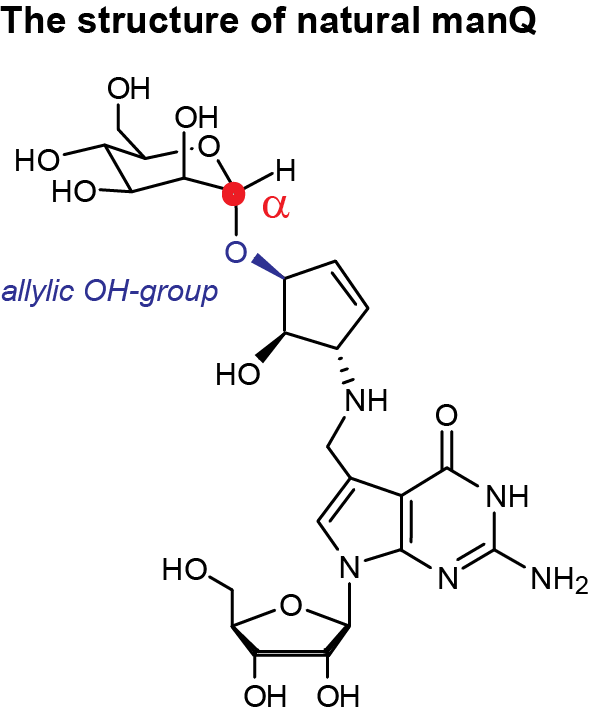 Figure 4: The corrected structure of manQ features a mannose connected to the allylic hydroxy group of the cyclopentene moiety via a α-glycosidic bond.

I personally believe that this is what makes science so fascinating: it is like a journey where you never know what to find just around the corner. With this, I would like to conclude with a (slightly altered) famous quote from Tolkien’s Lord of the Rings: “It's a dangerous business […] doing science. You step onto the road, and if you don't keep your feet, there's no knowing where you might be swept off to.”

A cyan spie for salt in cells