A wide variety of organic and inorganic compounds show π-aromaticity, yet for all-metal systems it has remained restricted to compounds with three to five atoms. Now, the anionic cluster [Th@Bi12]4− has been shown to exhibit π-aromaticity, with a significant ring current despite relying on the deloc…

Can a clusters that exists of exclusively metal atoms exhibit π-aromaticity, such as an organic ring compound? Yes, it can! This was shown for the first time in 2001 on the example of “Al42−” (detected as its gas-phase complex [NaAl4]−), which can be viewed as a 6π-aromatic cycle according to quantum chemical investigations. Can such all-metal aromaticity be strong? Although it is difficult to quantify aromaticity, there is one criterion for it that may be used to judge about its strength, known as the “magnetic criterion”. According to this, an aromatic compound should produce a notable ring current. This ring current can be detected by NMR spectroscopy, if the compound comprises NMR nuclei. Additionally – and if there are no NMR nuclei in the compound – the ring current can be calculated by means of sophisticated quantum chemical calculations. The value calculated for benzene, for instance, is 11.4 nA/T, the one calculated for “Al42−” is 27.6 nA/T. Hence, while both molecules possess a 6π-aromatic system, the delocalization along the metal cycle is stronger – which is in line with electron delocalization being a characteristic property of metals. However, only three types of all-metal 6π-aromatic molecules been reported so far – three-membered, four-membered, and five-membered metal cycles. Moreover, these either comprised stabilizing organic ligands, or they were part of larger metal clusters, neat solids, or transition metal complexes comprising further ligands. The only isolated, ligand-free aromatic metal rings known so far, Pn5− (Pn = Sb, Bi) were detected in the gas phase only.

By using a highly reductive ternary K/Ga/Bi solid and an organometallic source of Th4+, we succeeded in the preparation of a ligand free, anionic cluster that defines a new generation of all-metal π-aromatic molecules: [Th@Bi12]4− can be isolated in single crystalline form as a salt, and it can be transferred into solution without changing its integrity. The cluster consists of an aromatic “Bi128−” cycle that does not require external ligands for kinetic stabilization, as it is stabilized from inside by embedding a Th4+ cation in its center. The latter does not notably impact the aromaticity, which is characterized by a calculated ring current of 23.7 nA/T for the (hypothetically) empty “Bi128−” cycle, and 22.7 nA/T for the experimentally observed cluster [Th@Bi12]4−. Noteworthy, these values are about twice the value calculated for benzene and close to those calculated for the 26π-system porphine (25.3 nA/T) – and even more notably, unlike the 6π-aromatic “Al42−”, the new molecule uses only 2π electrons (in the HOMO) for producing this substantial ring current. This indicates a remarkably high mobility of the electrons along the 12-atomic metal architecture.

The chemical behavior of π-aromatic metal clusters has been completely unexplored to date, as none of them were accessible in condensed phase as discrete molecules so far. We will investigate the reactivity of [Th@Bi12]4− towards inorganic and organic compounds, and also search for related molecules comprising other metal atoms for expanding the field.

Michael Gottfried
about 1 month ago 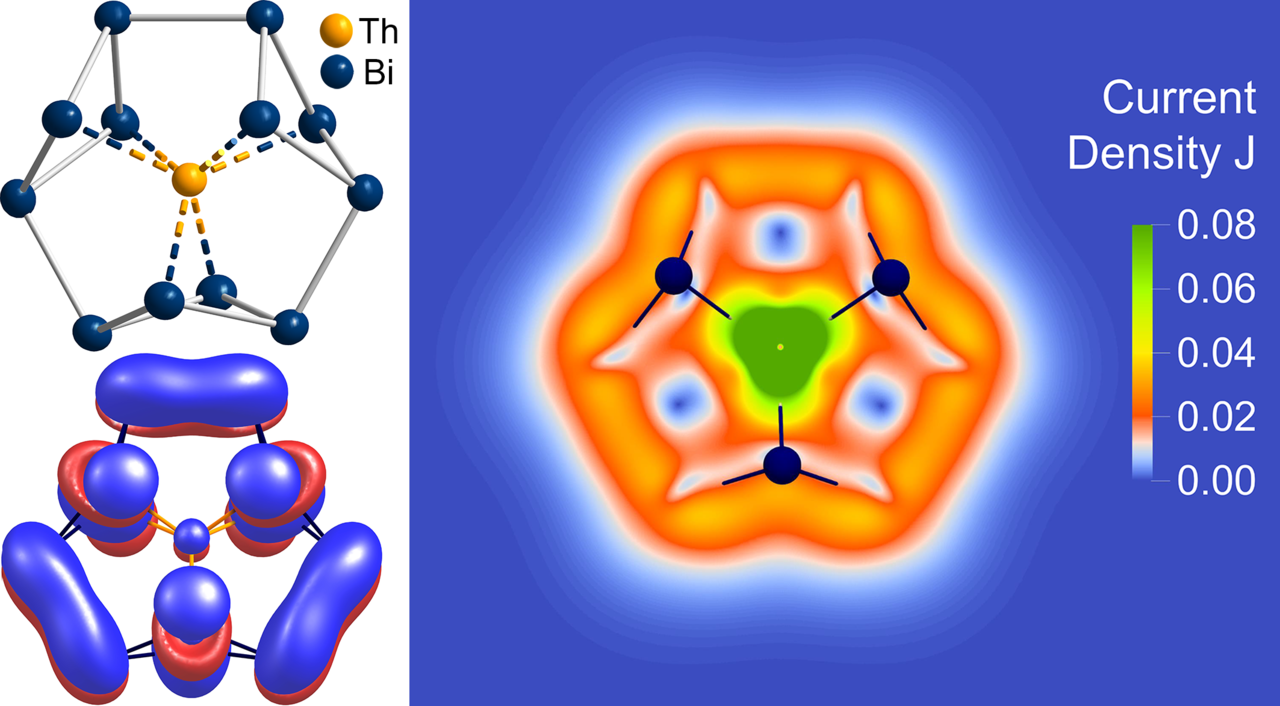