Metal-organic frameworks (MOFs) are an emerging class of three-dimensional porous materials, formed by self-assembly of metal atoms and organic ligands. The tunability of the structure and pore size of MOFs makes them promising candidates for gas separation1. Since the invention of the first MOF material, MOF-1, in 1995, there have been tens of thousands of MOFs reported. However, to the best of our knowledge, none of them has achieved commercial application. The primary reason is that the productions of MOFs in large scale are very difficult and expensive. Some characteristics of MOFs also make it difficult to use them industrially. For example, the chemical stabilities of some MOFs are low. Additionally, most synthesized MOFs are in the form of fine power, so they must be further processed before being used as absorbents in traditional pressure swing adsorption or temperature swing adsorption process. Frankly, compared with the efforts made on synthesizing new MOFs with higher and higher performances, those on the using techniques of them are scarce. Chen’s group is one of few teams working on industrial application technology of MOFs. Their works focus on the application of one most maturely studied MOF, ZIF-8. They proposed a kind of slurry sorption technology in which ZIF-8 powder as synthesized was directly mixed with suitable solvent to form flowable slurry and then used as absorbent for gas separation2, 3. They also invented method to produce ZIF-8 economically in large scale4, 5. In present work, they developed a novel ZIF-8 slurry, as shown in Fig. 1, suitable for the high efficient separation butane isomers, which has been considered to be very important and full of challenge in petrochemical industry. More encouragingly, they established a pilot industrial apparatus, as shown in Fig. 2, for separation of butane isomers and carried out pilot test. It is a critical step approaching the commercial application of MOFs.

Here, aqueous solution of N,N-dimethylpropyleneurea (DMPU) was used to prepare ZIF-8 slurry. DMPU exhibits low toxicity, low volatility, low viscosity. It is well know that the chemical stability of absorbent is of leading significance for an industrial separation process. Fortunately, the perfect chemical stability of ZIF-8/DMPU-water slurry has passed the evaluation in both lab- and pilot-scale experiments. Both single component sorption tests and mixed isomer separation experiments demonstrated that the solvent DMPU significantly increased the sorption speed of n-butane, while water drastically decreased sorption of isobutane in the ZIF-8/DMPU-water slurry. By optimizing the mass ratio of DMPU to water, i.e., 80:20, both promising sorption speeds for n-butane and selectivities (>890) for n-butane over isobutane were achieved.

Furthermore, a pilot industrial apparatus (Fig. 2) was set up to verify the feasibility of the scale-up slurry separation process. The functional department of the apparatus is an absorption column (5.17 m) and a desorption column (5.48 m), both of them are placed with CY700 structured packing. The inner diameters of the absorption column and the desorption column are 47 mm and 98 mm respectively. The test results show that the purity and recovery ratio of isobutane product achieved 99.46 mol% and 87%, respectively. Comparatively, the separation results obtained in a Chinese refinery using the distillation method with the approximately same feed composition were only 98.56 mol% and 54%. Additionally, the height and tray number of the distillation column are 72 m and 120, respectively, to meet the separation requirements. In this case, equipment investment is expensive. At the same time, the reflux ratio of the distillation column is set to >10, leading to high energy cost, while there is no reflux in the slurry method. In summary, the slurry method provided great improvements relative to the traditional distillation method in separation efficiency, energy cost, and equipment investment. 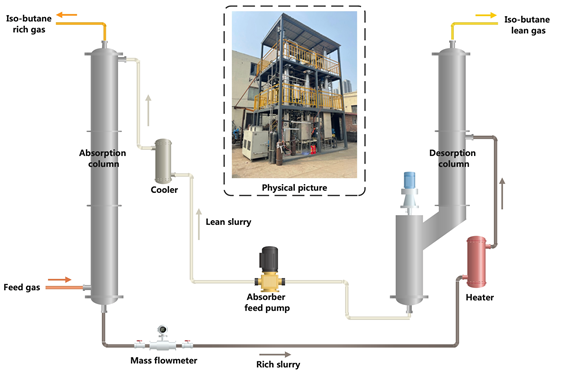