The Surface Molecular Imprinting strategy is focused on the development of selective catalysts by adsorption of a template molecule with the deactivation of uncovered sites to create non-poisoned active islands (images) with pre-determined shape and size for the selective catalysis.
Vitaly Ordomsky
CNRS Researcher, CNRS
Follow
Like Be the first to like this
0

Molecular imprinting can facilitate size- and shape-selective reactions beyond traditional approaches based on porous materials, but is still not fully established for heterogeneous catalysts. Here a molecular imprinting approach is introduced to generate a supported palladium catalyst for the selec…

Once on the train, we were discussing the interesting phenomenon we observed during the investigation of Fischer-Tropsch synthesis in the presence of poisoners such as H2S, which we studied in the framework of the project for biosyngas conversion. The Ni/Al2O3 catalyst was deactivated by the addition of a sufficient amount of H2S in inert gas, however, the catalyst was still active after the addition of the same amount of H2S during Fischer-Tropsch synthesis [1]. We explained it by the protection of Ni nanoparticles by adsorbed CO. We came to the idea that it would be interesting to create images of the reacting molecules on the catalyst surface by poisoning agents. This should enable selective adsorption and catalytic transformation for only targeted reacting molecules, while larger molecules will not be able to adsorb and react on the catalyst. The procedure would resemble the imprinting process.

Several years afterwards, we tried to demonstrate the feasibility of this concept by poisoning metallic catalysts (Pd, Co, Ni…) with pre-adsorbed aromatic molecules (toluene, mesitylene and triisopropylbenzene) using a broad range of poisoning molecules such as H2S, O2 etc. However, we could not detect the effect of pre-adsorption on selectivity. We realized that the high mobility of poisons on the metal surface dismissed the effect of imprinting.

Later, we worked on an industrial project for the development of a stable catalyst for hydrogenation of 3-(Dimethylamino)propionitrile:

The product of reaction (3-(Dimethylamino)-1-propylamin (DMAPA)) turned out to be a strong poison for metallic catalysts with almost full deactivation after the first reaction cycle. The reason for this behavior is the high basicity of the amino group leading to strong interaction with metal sites and irreversible deactivation. In our article published in Nature Catalysis [2], we proposed to use DMAPA as a poison for imprinting aromatic molecules over Pd catalyst and found that our imprinting strategy works very successfully for metal catalysts. Using toluene as a template, we could hydrogenate only this molecule with significantly lower activities for hydrogenation of mesitylene or triisopropylbenzene due to the steric hindrances induced by amine surrounding the active islands (Figure 1). Finally, we used this concept for the removal of cancerogenic benzene from the aromatic mixture by selective hydrogenation of this molecule.

Catalyst imprinting is different in comparison with selective poisoning when the catalyst is treated by poisoning agents to increase selectivity or activity [3, 4]. The effect of deactivation is mainly related to modification of the electronic state of the metal or accessibility of the reagents to the active sites. The catalyst in this case could be more selective for the transformation of similar molecules but cannot be specific to one molecule, which we observe in the case of imprinting.

The selectivity control requires a new approach to force the development of “smart” catalysts similar to enzymes able to recognize raw molecules with their selective transformation to the target products. Indeed, the high selectivity of enzymes is explained by the confinement of active sites inside a protein matrix, which provides the correct orientation of the reagents and chemical environment before interaction with the active site.

As an attempt to mimic enzymatic systems, molecular imprinting technology has emerged as a new and rapidly developing area aiming at reproducing the environment of enzymatic cavities by the creating of molecularly imprinted polymers complementary to the molecules in shape, size and functional groups [5]. In this case, the molecularly imprinted polymers (MIPs) with recognition sites in polymeric matrices have been developed by using template molecules and functional monomers containing functional groups, which polymerize around templates [6]. However, similar to porous materials, the MIPs catalysts with recognition cavities inside the organic or inorganic matrix suffer from diffusion problems, low thermal stability and can be used only for complex catalysts.

The highly desirable would be the development of the process for modification of existing heterogeneous catalysts to adapt them for the specific catalytic reactions to significantly increase the selectivity of the processes and decrease the amount of side products. The SMI strategy provides numerous opportunities to perform selective reactions over different types of metallic and acid-base heterogeneous catalysts by proper selection of the template, poisoning molecules and design of the imprinting process in special reactors with controlled addition of imprinting agents. The main advantage of this concept is that it can create extremely selective chemical processes on the basis of the existing industrial catalysts avoiding the development of new catalytic materials. 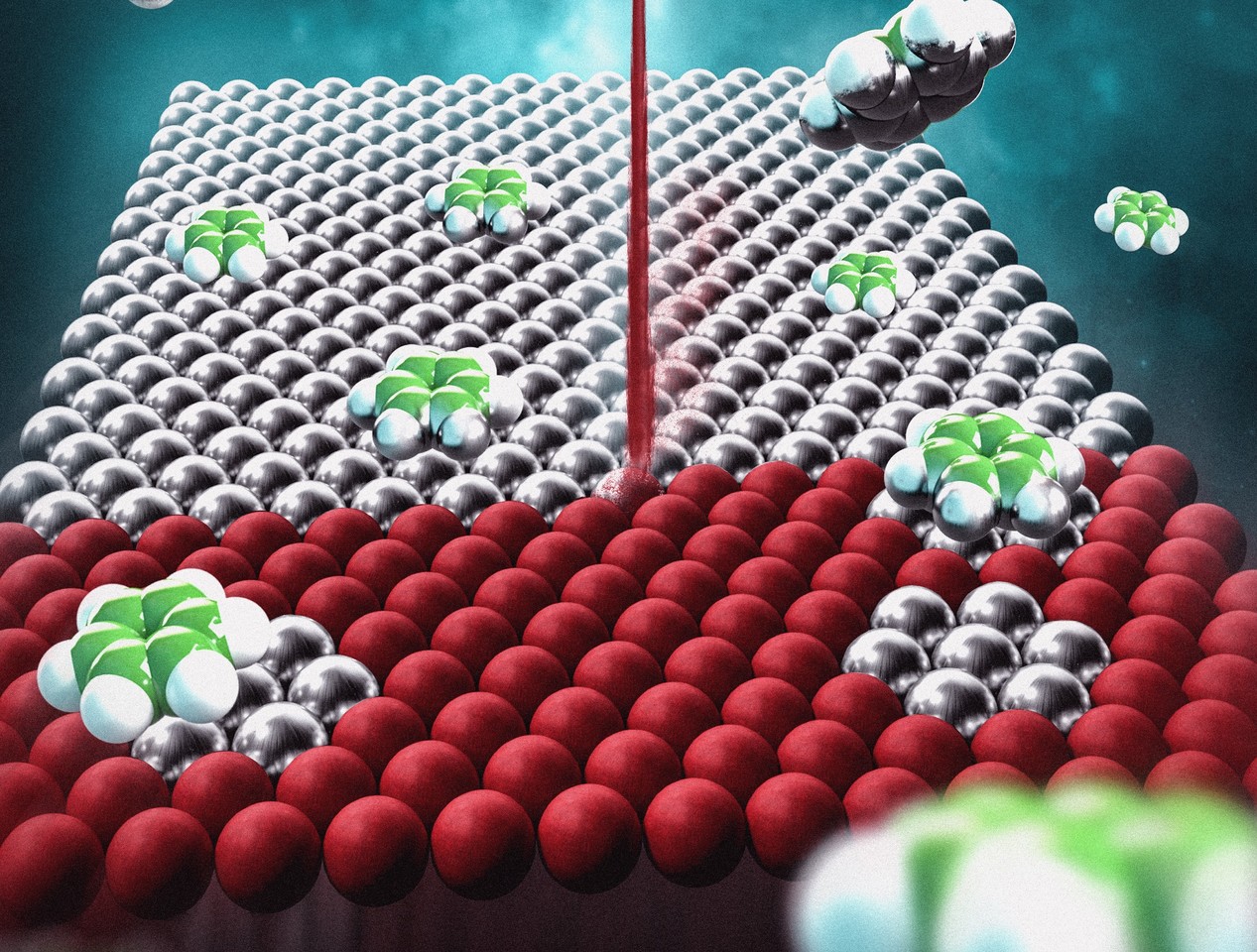 The Surface Molecular Imprinting strategy is focused on the development of selective catalysts by adsorption of a template molecule with the deactivation of uncovered sites to create non-poisoned active islands (images) with pre-determined shape and size for the selective catalysis.