Photoswitches have not found their way into 3D printing yet. A recent report describes the fabrication of photochromic 3D microstructures, combining photoswitching properties with the design freedom of 3D printing. This will be an important step in expanding the scope of photochromic materials.
Johannes Kreutzer
Senior Editor, Springer Nature
Follow
Like Be the first to like this
1

Photoswitches that reversibly change between two photochromic states in response to a light stimulus proved to be a promising tool for the development of smart materials. Following a research boost in the 80ies many photoresponsive materials, which make use of light as ubiquitous, non-toxic and well-controlled stimulus, were developed. Applications range from sensors and surfaces with tunable wetting properties in materials science to drug delivery systems in the biomedical field.

Initially, the requirement of UV light as well as high absorption coefficients of the photoswitches in the coloured states and resulting limited penetration depth into materials constrained the range of applications as photoresponsive materials. These limitations were elegantly addressed by the development of Donor-Acceptor Stenhouse Adducts (DASA) as negative photochromic switches in 2014, which pushed the field forward. DASA photoswitches typically show a coloured stable state and switch to a thermally unstable state after photobleaching with visible light. The development of the second and third generation of DASAs improved the switching performance and wavelength tunability in the visible spectrum of the light.

Until now, conventional fabrication techniques, such as mold casting and spin coating were used to fabricate photochromic smart materials while application of photoswitches in 3D printing has not been realized. This is surprising, as the combination of wavelength specific activation of photoswitches with the design freedom of 3D printing can be a powerful tool in the development of new materials.

Writing in Small, a research team at ETH Zurich and EMPA led by Xiao-Hua Qin looks into this matter and demonstrates a fast curing resin for rapid two-photon laser processing of complex microstructures. Functionalization of the polymer after writing with DASAs renders the structures with photoswitchable properties.

Using a modular thiol-ene resin, the authors incorporate a substoichiometric amount of an ene-terminated DASA precursor. The highly efficient thiol-ene photo-click reaction allows for high writing speeds up to 50 mm/s and yields stable structures. Developing the printed structures using activated furan adducts such as Meldrum’s acid, N-substituted barbituric acid or pyrazolone, forms the DASA, turning the optically transparent precursor networks into coloured DASA networks. Using two-photon polymerization at 780nm, the authors avoided absorption of the ene-precursor in the UV light range, which would slow down the photopolymerization reaction. After successful functionalization, complex patterns with excellent spatial resolution can be written into the microstructures.

Their precursor based approach offers different advantages: Firstly, using a precursor in the resin minimizes the risk of photodamage of the DASA during the photopolymerization. Secondly, keeping the properties of the same precursor network, DASA-functionalized networks with different colour and photoswitching properties can be easily accessed during the development step. Additionally, variations in the composition of the resin allows to tune the network structure and crosslinking density. This is important because the photoswitching properties of DASAs depend also on the chain flexibility and mechanical properties of the polymer matrix. Investigating photobleached samples of varying resin composition, the authors demonstrate that an increase in the glass transition temperature of the polymer matrix slows down the thermal back reaction from the colourless state to the coloured state. Clearly, following the colour transition by UV-VIS spectrometry is not possible due to the small scale of the objects. This leads the authors to follow thermal back reaction by quantifying the change in fluorescence intensity between the colourless non-fluorescent closed state and the coloured fluorescent open state of the DASA molecules using a confocal microscope.

This first step in combining structural variability of 3D printing with photoswitching properties is an innovative approach to expand the application of photochromic functional materials.

Johannes joined Nature Communications in September 2017 as an Associate Editor. With a PhD in materials chemistry and a background in photopolymerization, he handles manuscripts on chemical soft matter and advanced organic functional materials. Johannes is based in the London office.

Hi, photoswitching is pivotal in research particularly in equipment that are based on light  scattering dynamics/sorting (LSDs). It will be a great utility add-on if LSDs can adjust light type/wavelength to different stimuli so as to avail the opportunity to detect and analyse the unknowns in specimens. It is also applicable (my thinking) in nano-theranostics for adaptability as well as precision in simultaneous  diagnostic and therapy delivery. Thank you. 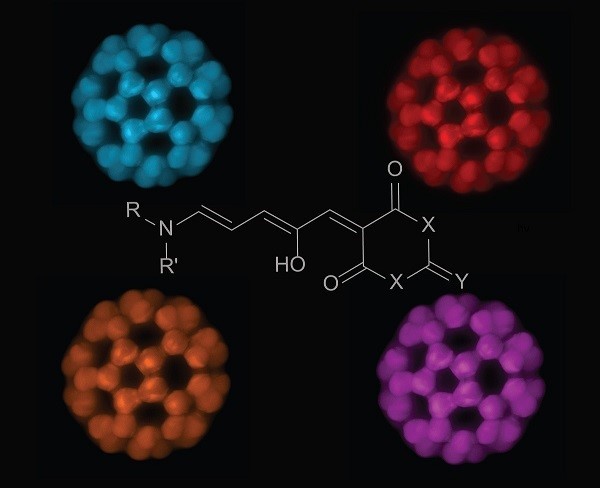 Photoswitches have not found their way into 3D printing yet. A recent report describes the fabrication of photochromic 3D microstructures, combining photoswitching properties with the design freedom of 3D printing. This will be an important step in expanding the scope of photochromic materials.