Nature Communications - Glycans are abundant biomolecules that mediate essential biological processes, but their chemical synthesis is challenging. Here, the authors report the synthesis of glycans...

On 4th March 2018, Qian Zhu obtained finally 3 mg of the 128-mer glycan. The 1H NMR of the product no longer showed signals of the protecting groups, indicating the complete cleavage of 64 benzylidene, 64 benzyl, and 128 benzoyl groups, besides the terminal tert-butyldimethylsilyl and p-methoxyphenyl group. This had took Qian nearly two months since he succeeded a [64-mer + 64-mer] glycosidic coupling and had at hands 114 mg of the fully protected 128-mer. At this molecular size, the varying solubility of the intermediates during the deprotection process became a formidable problem to handle.

The 128-mer was then the largest homogeneous glycan had been synthesized, nevertheless, it was not our original goal to pursue such a record. In early 2017, Antonio Molinaro brought my interest in the lipopolysaccharides of Bacteroides vulgatus that this endotoxin of the commensal enterobacteria was found to conversely act as an inflammation-silencing agent1. The unique O-antigen glycan of B. vulgatus, consisting of →4)-α-L-rhamnopyranosyl-(1→3)-β-D-mannopyranosyl-(1→ repeating unit, could be tested as a therapeutic agent against colitis if we could prepare in large quantity. Months later, I had a good candidate to assign this synthetic project; Zhengnan Shen, who completed relevant projects involving β-rhamnopyranosylation, should be able to just finish the new synthesis in his remaining one year Ph.D program. Smoothly, he accomplished the synthesis of up to a 32-mer using the convergent [2n-mer + 2n-mer] glycosylation strategy. Unexpected was the yields of the gold(I)-catalyzed glycosylation reaction kept constantly higher than 90% in construction of the rhamnopyranosyl-α-(1→3)-mannopyranoside linkages, thus I became curious how long a glycan we could make using this glycosylation method, which was developed in my lab in 2008 and has since been widely applied2. Qian, who had joined my group and been paired with Zhengnan for one year, was asked to continue the journey. And he concluded with the 128-mer.

The homogeneous 128-mer provided an opportunity to test the limits of analytical tools for the characterization of polysaccharides. Alba Silipo measured the sizes of the synthetic 21-7–mer glycans with 2D diffusion ordered spectroscopy NMR technology and found a good match for glycans up to the 64-mer. To acquire the molecular weight of the 128-mer, Qian had his 3 mg sample largely consumed and had to prepare the glycan once again. Finally, Simone Nicolardi was able to determine the molecular weight using MALDI-FT-ICR-MS. Meanwhile, Alba performed conformation studies based on her NMR expertise, she found the glycan adopted an extended flexible structure. The lack of compact structure might account for the successful synthesis of up to such a long glycan. Additionally, Fabrizio Chiodo found a selective binding of the synthetic glycans with human C-type lectin DC-SIGN. And this will prompt us to make more glycans for further immunomodulatory studies.

During submission of this work, Peter Seeberger et al. published the synthesis of a 151-mer polymannoside, relying on a 4-fold simultaneous glycosylation of a branched 31-mer with a 30-mer glycosyl donor3. Nevertheless, the title of this essay holds true that the 128-mer is still the longest LINEAR glycan has been chemically synthesized.

Find details of this work at https://rdcu.be/b6kYX. 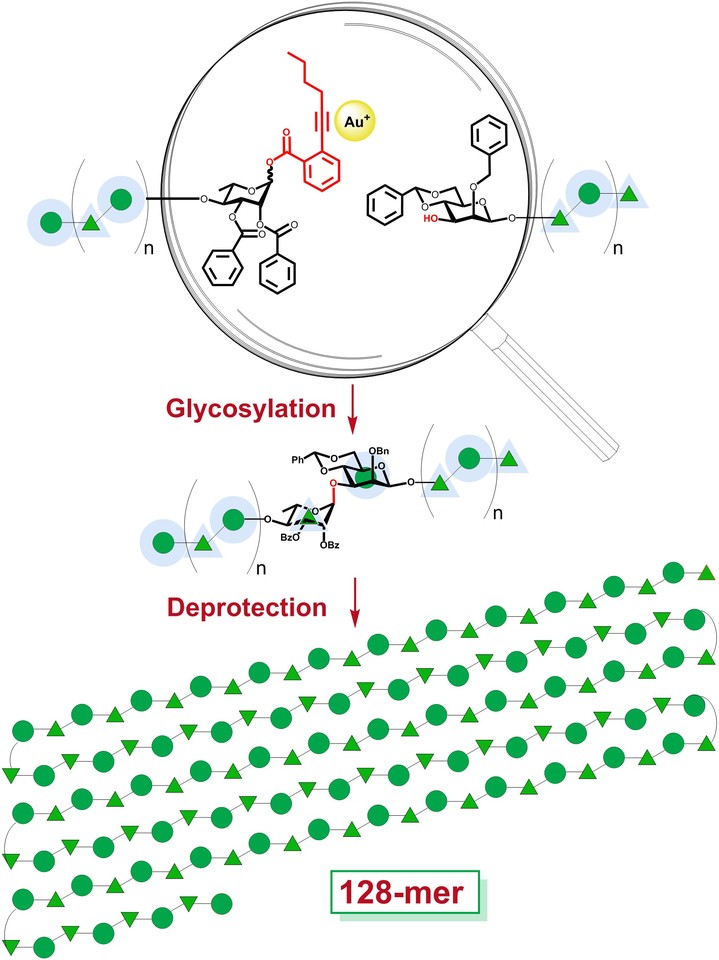