+1
Tom Robinson and 1 other View all
Group Leader, Max Planck Institute of Colloids and Interfaces
Follow 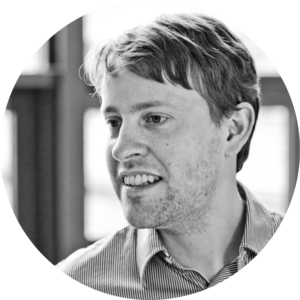 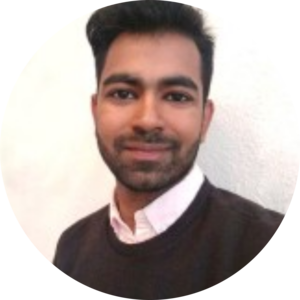 Initially, our group’s work started out by building microfluidic platforms designed to trap and analyse lipid vesicles, specifically giant unilamellar vesicles (GUVs) 1,2. Microfluidics offers advanced control over traditional bulk experimental platforms allowing us to deliver molecules to the lipid membranes to analyse their properties 3 or to apply forces to model how real cell membranes might respond to externally driven perturbations 4,5. In these cases, our GUVs were created using bulk methods which suffer a few drawbacks, namely their size heterogeneities and their lack of ability to encapsulate large biomolecules. These failings can be overlooked for most applications, but our group’s long-term vision is the creation of synthetic cells using GUVs which requires a higher level of control.

Using GUVs to form synthetic cells is the bottom-up approach of synthetic biology, where the goal is to assemble a minimal cell which is able to demonstrate basic life-like functions (such as division, growth, etc.) from non-living components (such as lipids, DNA, and proteins). These two videos explain the approach much better than we can here: https://youtu.be/TdeHvBIRkZw & https://youtu.be/7er7saHVFW0

Why do we want to build a minimal cell? Well, biological cells are complex and far from fully understood, so the idea is that by creating elements of biological cells in a lab, we can better comprehend real ones. Also, as synthetic cells become more and more life-like, it could give us a better understanding of how life on Earth was able to originate as one could start to see the transition from non-living matter to life - and that’s an exciting prospect!

For this difficult task it is essential to be able to control the size of the compartments and also to reliably encapsulate large biomolecules that are required for processes such as metabolism. Recent developments in microfluidics have provided a breakthrough in this regard 6. The left-hand side of Figure 1 shows a cartoon of how we use microfluidic channels for this task. First, we create water droplets inside oil which contains lipids, then we re-encapsulate them inside water to create very thin shells made of oil, called double emulsions. The trick is that as the oil is removed the remaining lipids form monolayers at the oil-water interfaces which zip together to form bilayers and therefore lipid membranes. The main advantage of this method, compared to traditional bulk ones, is that the size of the droplets and therefore the final GUVs, can be precisely tuned. In addition, biomolecules (large or small) which are introduced in the first water droplets end up inside the GUVs, with high efficiency and low variability. 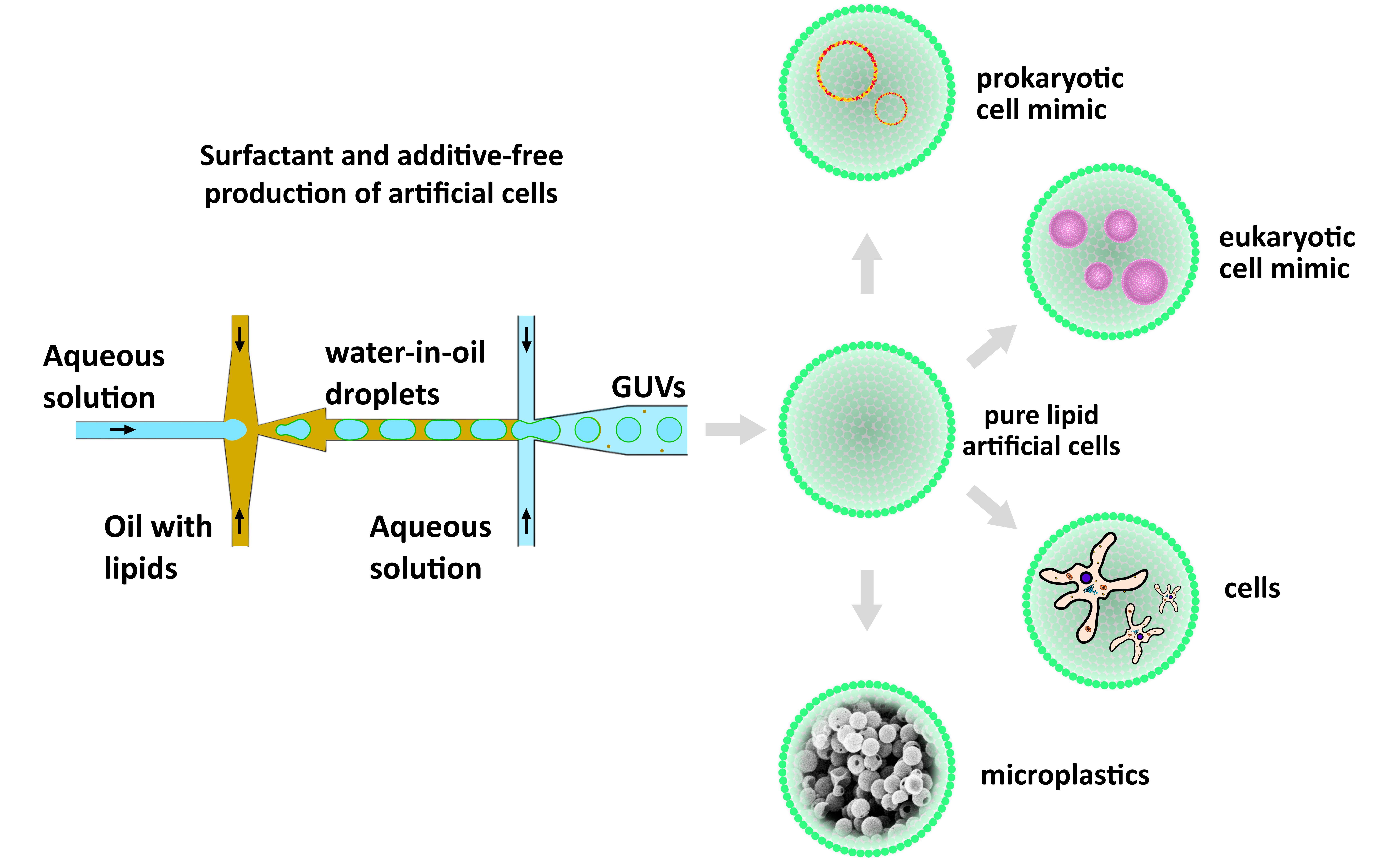 Figure 1: Cartoon of how microfluidics is used to form lipid vesicles (left), and how we can increase their complexity towards building synthetic cells by encapsulating various (bio)materials (right).

In the same way that air bubbles need soap for stability, surfactant molecules are normally added to the solutions to stabilise the oil shells. Similarly, additional molecules such as glycerol, PVA, and ethanol are also added to aid with the formation of the double emulsions and to removal of the oil. When our lab first wanted to use microfluidics to make GUVs, we approached Julien Petit and Oliver Bäumchen at the Max Planck Institute for Dynamics and Self-Organization. Our labs were both part of the MaxSynBio, a Max Planck Research Network in Synthetic Biology. At the time, the method they used also required adding these foreign ingredients which ultimately meant that the final lipid membranes were contaminated. At our weekly group meetings, the question of how much these additives would affect the biophysical properties membranes often came up. We were also concerned that the presence of unwanted molecules might adversely affect the enzymatic reactions that we aimed to establish inside the GUVs.

So we asked the question: can we make microfluidic GUVs purely with lipids?

The first obstacle was to design a device that was able to produce the double emulsions in a reliable manner. We achieved this by implementing two cross-junctions and serpentine-shaped twists in the channels. The cross-junctions allow us to tune the formation process because we can (i) visualise the water droplet formation (via high-speed video microscopy) and (ii) adjust each flow-rate accordingly. The twists in the channels have the important job of stabilizing the flow rates, a bit like shock absorbers in vehicles. Because the formation happens at very high speeds it can be destabilised by small vibrations and inconsistencies in flow parameters, so the long serpentine channels help prevent that. They also serve to add additional shear forces on the double emulsions which aids with the lipid monolayer formation. Once we had a reliable and reproducible design at our fingertips, the next step was to remove the additives (that are normally essential) and see if it worked.

It did! But only after we adjusted the amount of lipids used in the solution. We found a higher concentration worked better as it would speed up the time take to form the monolayers and stabilise the emulsions. In this regard, separating the emulsion steps with two cross-junctions also helps to form the first monolayer before the second junction, which prevents collapse. We also found that being able to control the flow rate via pressure pumps accurate to within a few millibars level was crucial. This and the two cross-junctions allowed us to therefore control the thickness of the oil layer and reduce it to optically non-detectable levels (see Figure 2) - important for the purity aspect. The fact that we do not need to add PVA, glycerol or ethanol also means that we can produce our GUVs in pure water if needed. Another bonus was that not only were the GUVs monodisperse in size, but we could tune their diameters over a very large range from about 10 to 130 microns. Once we could make double emulsions without surfactants or additives, we next turned our attention to the resulting GUVs.

Figure 2: Movie of pure-lipid GUVs being produced at 3000 times per second, taken with a high-speed camera.

To ensure oil removal we use octanol as the lipid-containing oil which spontaneously de-wets from the double emulsions leaving pure-lipid GUVs. Despite this, the other question which often comes up in meetings or conferences is: how much oil is left over in the bilayers?

Of course, this was important to us too as our goal was to make the membranes as pure as possible. Apart from having twists, the channels also have constrictions which squeeze the double emulsions and aid with oil droplet de-wetting, even from very thin oil layers. Despite all of these achievements we still wanted to test our GUVs for the presence of oil, so we performed a number of experiments. First, by successfully incorporating membrane pore proteins which would not be possible with thick oil layers in the bilayers. Second, we measured the diffusion of the lipids in the bilayers, then compared the data to measurements performed on GUVs made without oil. We found no significant differences.

Our findings point to the fact that we have pure lipid GUVs, but we admit that we cannot say for sure if there is 0 % oil in the final membranes. In this work we made a number of experiments, but there are numerous other tests that we invite other researchers to try. We did try mass spectrometry on GUV samples after it was suggested by the reviewers. We were sceptical as we expected to also detect the oil droplets next to the GUVs (a false positive result), but we didn’t. A good sign or not?! Professor Patricia Bassereau from the Institut Curie in Paris once told us that the only sure way to check for oil was to use optical traps to pull nanotubes from GUVs and look at friction effects. We still hope to do this one day.

Finally, because our future aim is to use these as synthetic cells, we wanted to show their applicability in this direction (as indicated in the right-hand side of Figure 1). Therefore, we encapsulated different components (DNA, cells, smaller lipid vesicles) inside these microfluidic GUVs taking advantage of the high encapsulation efficiencies as shown in Figure 3. This demonstrates that the machineries for building minimal cells from the bottom-up can easily be incorporated using this method. Moreover, present-day cells evolved from a soup of molecules that naturally assembled to form primitive protocells. So going back to this stage gives us with the opportunity understand how complex cells could have evolved. We believe that being able to control the assembly of cell-mimicking compartments with a high degree of control and without additives, which can adversely affect their behaviour, is an important turning point in bottom-up synthetic biology research.