We report here the NMR solution structures of the bulge-containing KRAS-G4 bound to berberine and coptisine, respectively. For the first time, our study contributes molecular details of ligand interactions with KRAS-G4 and provides a model system for the design of specific KRAS-G4-interactive drugs.
Kai-Bo Wang and Ling-Yi Kong
2 contributors
Like Liked by Evelina Satkevic and 2 others
0

Nature Communications - The G-quadruplex formed in KRAS oncogene promoter (KRAS-G4) is a transcriptional modulator and amenable to small molecule targeting. Herein, the authors report the NMR...

KRAS is well-known as one of the most highly mutated oncogenes in human cancers and implicated in poor survival, particularly in pancreatic (~95%), colorectal (~41%), and lung (~32%) cancers.1,2 Notably, although KRAS is a highly pursued therapeutic target, direct inhibition of mutant KRAS oncoprotein has proven to be challenging in precision oncology for nearly 40 years.1 The KRAS oncoprotein has thus been considered as "undruggable". Therefore, it is essential to develop alternative KRAS signaling inhibitors.

The promoter region of the human KRAS oncogene has a critical GC-rich nuclease hypersensitive element, which can form a DNA G4 structure (KRAS-G4, Figure 1).3 KRAS-G4 has proved to be a transcriptional modulator, which is amenable to small-molecule targeting.4-6 Several free KRAS-G4 structures have been determined and a number of KRAS-G4 interactive small molecules (ligands) have been reported. However, no available KRAS-G4-ligand complex structure has yet been determined, which seriously hinders the structure-based rational design of KRAS-G4 targeting drugs.

We start to seek suitable KRAS-G4 binding ligands and to determine their complex structures back into 2020 when I just joined China Pharmaceutical University and established my lab with the help of Prof. Ling-Yi Kong.

As published free KRAS-G4 structure only has an adenine residue for the 5′-end flanking site, we think that is not enough for specific ligand recognition. We thus checked the genome sequence of the KRAS oncogene and chose the Pu24m1 DNA sequence which contains the wild-type TGA residues in the 5´-flanking site so that can better mimic the wild-type KRAS-G4. We then determined the NMR solution structure of free KRAS-G4 using Pu24m1 DNA sequence. With the obtained free KRAS-G4 structure, we screened several natural alkaloids and found that berberine (BER) and coptisine (COP) could strongly bind and stabilize the KRAS-G4 by using various biophysical experiments. We subsequently determined the high-resolution NMR solution structures of KRAS-G4 in complex with berberine and coptisine, respectively. The determined complex structures elucidate the detailed features for the specific recognition of the KRAS-G4 by small molecules. Moreover, berberine and coptisine significantly stalled the Taq DNA polymerase synthesis of the complementary strand DNAs and lowered the KRAS mRNA levels in cancer cells. Collectively, our study, for the first time, contributes structural insights into the ligand interactions with KRAS-G4 and provides a model system for the design of specific and potent KRAS-G4-interactive drugs. 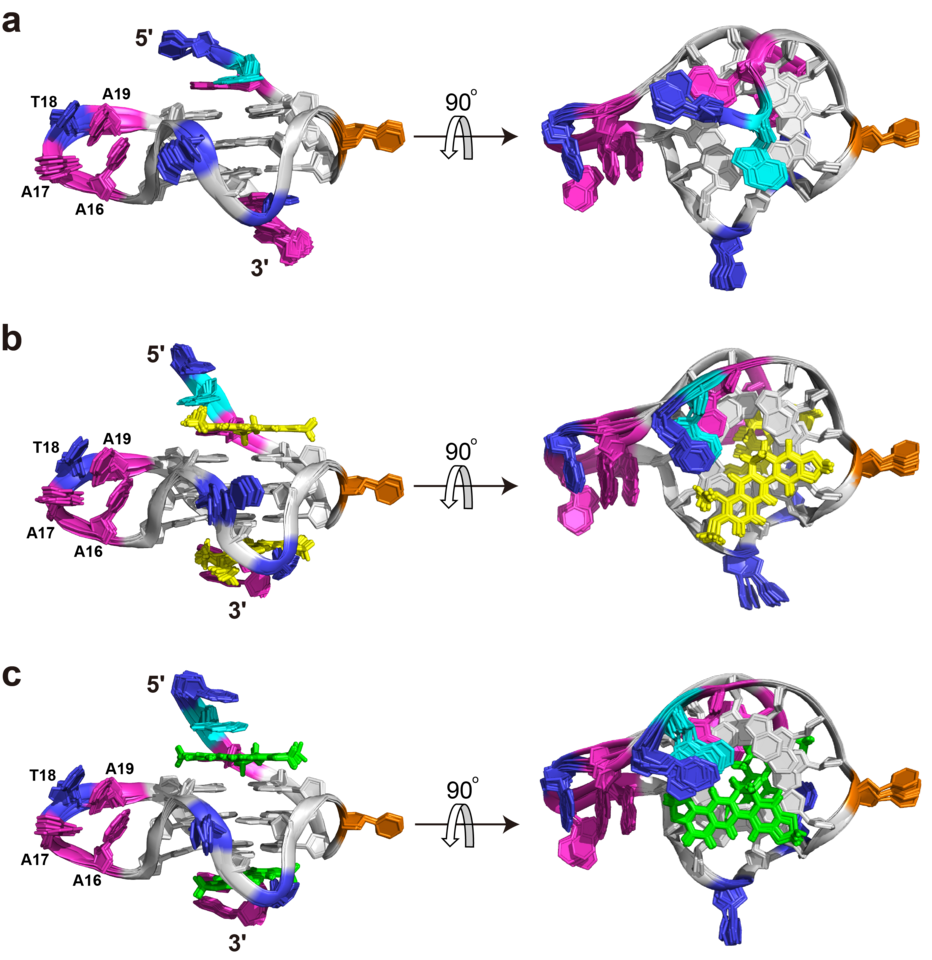 We report here the NMR solution structures of the bulge-containing KRAS-G4 bound to berberine and coptisine, respectively. For the first time, our study contributes molecular details of ligand interactions with KRAS-G4 and provides a model system for the design of specific KRAS-G4-interactive drugs.