In our paper, we describe the interactions of α-synuclein or Tau, which are known for being the hallmarks of Parkinson’s and Alzheimer’s disease, respectively, the formation of complex coacervates containing both proteins by liquid-liquid phase separation and their co-aggregation inside them.
David Polanco Irisarri
PhD Student, Universidad de Zaragoza
Follow
Like Liked by Amy Mundye
0

Here, the authors report that α-synuclein phase-separates into liquid condensates with positively charged polypeptides such as Tau. The condensates undergo different maturation processes, including the formation of α-synuclein/Tau amyloid hetero-aggregates inside the condensates.

Along with the amyloid-beta peptide, α-synuclein (αS) and Tau are two of the most studied proteins in the amyloid aggregation field, mainly due to their pathological relevance as the main hallmarks of Parkinson’s and Alzheimer’s disease, respectively. Although the assignment of the aggregation of one particular protein to a specific disease has been long established as the hallmark of each type of disease, these proteins are often detected to co-aggregate and co-localize in the same protein-rich inclusions of the patient´s brains suffering from these diseases, and a potential pathological cross-talk between αS and Tau aggregation in neurodegenerative disorders has been established [1-3]. Nonetheless, their co-aggregation mechanisms and their pathological pathways regarding the different neurodegenerative clinical pictures are still unknown. Increasing experimental evidences suggest that a particularly aggregation-prone cellular environment could be the interior of protein condensates generated by liquid-liquid phase separation (LLPS) processes [4,5].

We have found that αS, a 140-residue intrinsically disordered protein containing a highly negatively charged C-terminal region at physiological pH, is able to form protein-rich liquid droplets in aqueous solutions by LLPS in the presence of highly cationic disordered polypeptides by a process of electrostatic complex coacervation. Interestingly, one of the αS partners that we have identified to form electrostatic complex coacervates with is the protein Tau. The multiplicity and transient nature of the protein interactions results in the formation of protein droplets that maintain liquid-like properties. These initially liquid protein droplets can undergo different maturation processes as a function of time. Maturation or ageing of liquid protein droplets over time into gel-like or solid-like structures has been reported to be relevant not only to disease, as an aberrant process that precedes amyloid aggregation, but also for the functioning of certain physiological protein liquid droplets. However, very little is known about the particular factors and molecular determinants governing protein droplet growth and maturation. In the electrostatic coacervates of αS with poly-cations, the maturation process seems to be governed by the strength of the interaction with the poly-cation and the valence and multiplicity of these interactions, which in turn dictates the rate of electrostatic compensation (valence exhaustion) within the droplet. In droplet systems composed of simple protein networks whose protein components show relatively high affinity, valence exhaustion is a very fast process, resulting in long-lived gel-like spherical droplets with more stable electrostatic interactions and thus more rigid protein networks. In contrast, for droplet systems with complex protein networks, the rate of valence exhaustion is significantly reduced and droplet growth is kinetically the most favorable process, which results in large protein droplets that maintain the liquid-like nature, where the highly crowded but dynamic and flexible protein environment allows for nucleation of protein aggregation. We have observed that αS and Tau coacervates are particularly efficient in generating large liquid-like protein condensed reservoirs with stoichiometric αS/Tau ratios in which amyloid aggregates containing typically both proteins are formed.

Amyloid aggregation inside the αS/Tau coacervates is sporadic and multiple nucleation events initiate inside various coacervates, and also at different locations inside the same coacervate, simultaneously. The transient and flexible interaction network of the droplets allows for the reorganization of specific sites to trigger amyloid nucleation. However, the highly crowded environment hinders the formation of long/large aggregates, also restricting their seeding and propagation. Consequently, the relative amount of protein in the aggregated state is orders of magnitude lower than that of the monomeric forms of the proteins in the solution, which limits the type of biophysical techniques that we can use to characterize the αS/Tau hetero-aggregates. We have made use of fluorescence single molecule techniques, both microscopic and spectroscopic in order to circumvent such limitations. On one hand, we were able to follow the onset of LLPS and LSPT using sub-stoichiometric concentrations of fluorescently labelled αS and Tau and visualize the co-aggregation process in situ, inside the sedimented coacervates by fluorescence lifetime imaging microscopy coupled with fluorescence resonance energy transfer (FLIM-FRET). In addition, we were able to isolate the aggregates generated inside the αS/Tau liquid coacervates and characterize their nature and composition using single molecule techniques such as fluorescence auto-/cross-correlation spectroscopy (FCS/FCCS) and single-burst TTCD/FRET analysis. We found that most of the aggregates generated (60%) are hetero-aggregates composed of both αS and Tau, although typically enriched in Tau protein, with an average of 4-times more Tau protein molecules per aggregate. The 30 % of the aggregates contained only Tau and ca. 10% only αS. This analysis indicated that while αS is capable of aggregating per se inside the coacervates with Tau, Tau nucleation is more favorable under these conditions, generating amyloid-like aggregates able to act as nuclei for the formation of hetero-aggregates of αS and Tau. Once the Tau-rich nuclei are formed, however, heterotypic interactions between αS and Tau are favored in the aggregates over the homotypic interactions between Tau molecules, a feature that might be related to the heterotypic nature of the liquid coacervates in which these aggregates are generated.

But… how do we know that these aggregates are amyloid-like?

The use of the typical amyloid fluorescence probe thioflavin T (ThT) is not appropriate when dealing with LLPS systems since gelation or maturation processes not involving amyloid aggregation will have an inherent increase in droplet viscosity and, therefore, a concomitant increase in the fluorescence quantum yield of this molecular rotor fluorophore. For this reason, we isolated the aggregates generated inside the coacervates and obtained dispersed aggregate solutions for their characterization using among others the typical ThT assays. These aggregates are stabilized by nonelectrostatic interactions, are able to bind ThT in the same way as canonical amyloid fibrils do and, indeed, share similar stabilities with respect to different treatments, suggesting that the αS/Tau aggregates formed in the interior of liquid condensates have an amyloid-like nature. We further prove this by using a well-established amyloid aggregation deficient Tau variant, which we observed to have identical abilities to bind αS and form liquid condensates by LLPS, but show remarkably impaired properties to form aggregates with αS in the interior of the condensates. We are currently trying to improve our isolation protocols to generate samples of αS/Tau hetero-aggregates in solution in larger quantities with the aim of obtaining detailed structural and biological information that we could relate with the current structure of the multiple amyloid polymorphs of homo-aggregates of either αS and Tau and their possible role in neurodegenerative diseases. 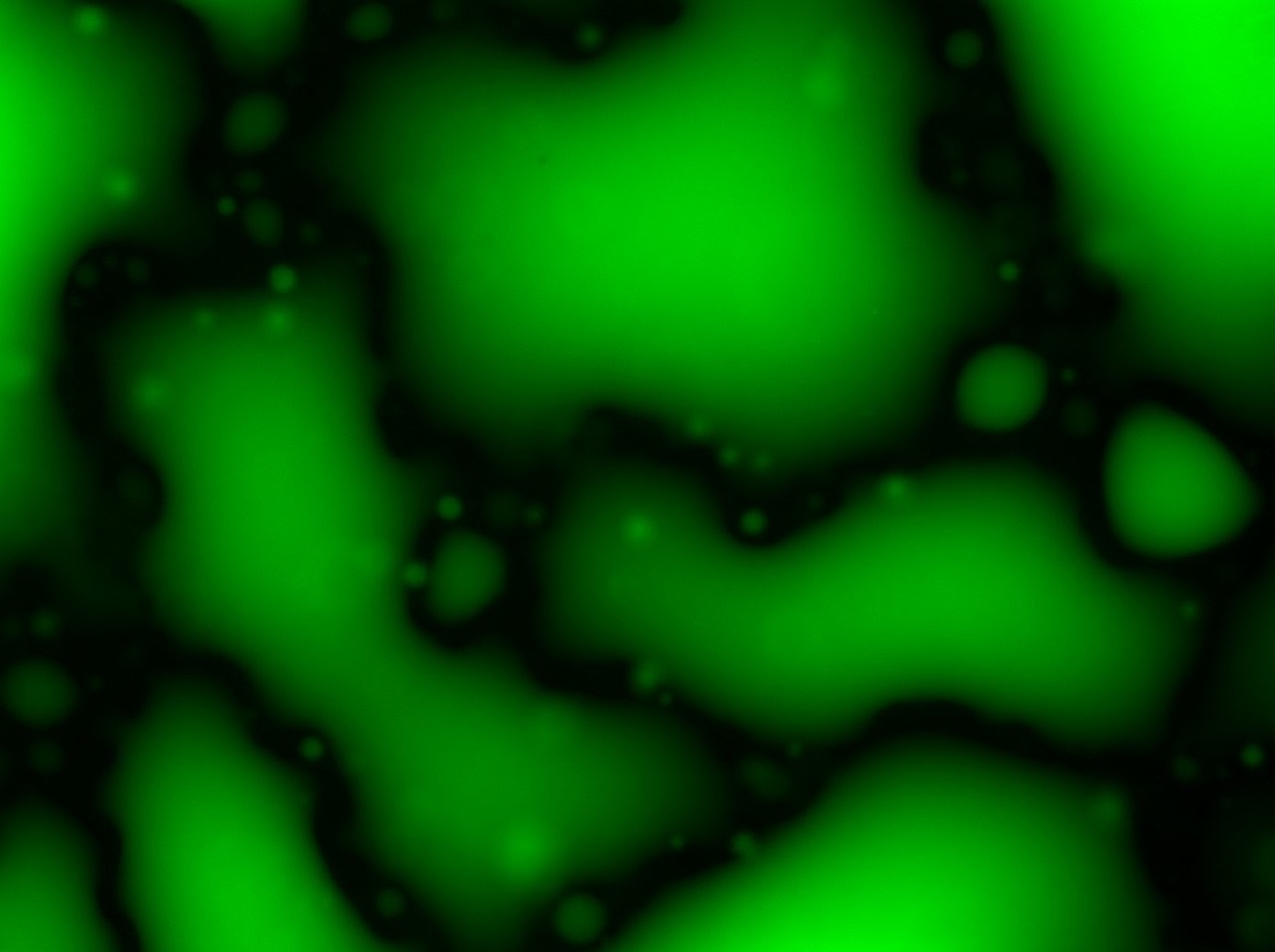 In our paper, we describe the interactions of α-synuclein or Tau, which are known for being the hallmarks of Parkinson’s and Alzheimer’s disease, respectively, the formation of complex coacervates containing both proteins by liquid-liquid phase separation and their co-aggregation inside them.