After having escaped structural characterization for decades, we finally caught and uncloaked the AROM complex, the centerpiece of the shikimate pathway in eukaryotic microorganisms. Do we understand it? Well, to some extent!

If you are familiar with biochemistry, you are probably familiar with the shikimate pathway. If not, or if you had skipped it in your textbook, google would tell you that it is a metabolic route towards a number of aromatic compounds and present in plants and microorganisms, but absent in mammals. This, in turn, would tell you that the pathway is a prototypic drug target – it is indeed one of the best-studied metabolic pathways. You also might have picked that up in the media, as this pathway is the target of the recently disgraced blockbuster weed-killer glyphosate.

One unsolved mystery has been on my mind ever since I took my first steps in structural biology as a student on this very pathway in 2005: While most organisms encode the seven steps of this pathway as individual, well-understood enzymes, fungi and protists have the five central steps fused into the pentafunctional AROM polypeptide, giving rise to the homodimeric AROM complex with ten enzymatic domains. In 2015, Harshul Arora Verasto, my first PhD student, convinced me to let her tackle it.

It was clear that we were not the first ones to try to solve the AROM structure since its discovery in the 1960s – this is why we tried virtually every experimental method available to us. For example, we collected small angle X-ray scattering and, in collaboration with Alexander Leitner from ETH Zürich, cross-linking mass-spectrometry data. These should have provided restraints for the computational modeling of the complex based on the known structures of the individual enzymes, should crystallization attempts fail. However, Harshul was persistent and lucky, and we indeed could solve a crystal structure! In retrospect we are so happy we did not go down the computational path: We entered AROM as a target into the 2018 CASP structure prediction experiment, providing all our experimental restraints, and none of the participating groups and servers were able to come up with a realistic model.

So, what does AROM look like? The crystal structure revealed a compact assembly of the ten domains, all of which essentially exhibit the structure expected for their monofunctional counterparts. Now, we could make use of the wealth of structural information collected over several decades for the individual monofunctional bacterial counterparts: Many of them actually perform large conformational changes during their catalytic cycles, which are documented in dozens of conformational snapshots in the Protein Data Bank for each individual domain. This enabled us – with a great contribution from our colleague Hongbo Zhu – to delineate the conformational landscape of the complex, illustrated in a video published alongside our paper. And now, finally, we could make good use of our experimental restraints to probe for the most populated areas within this conformational space! 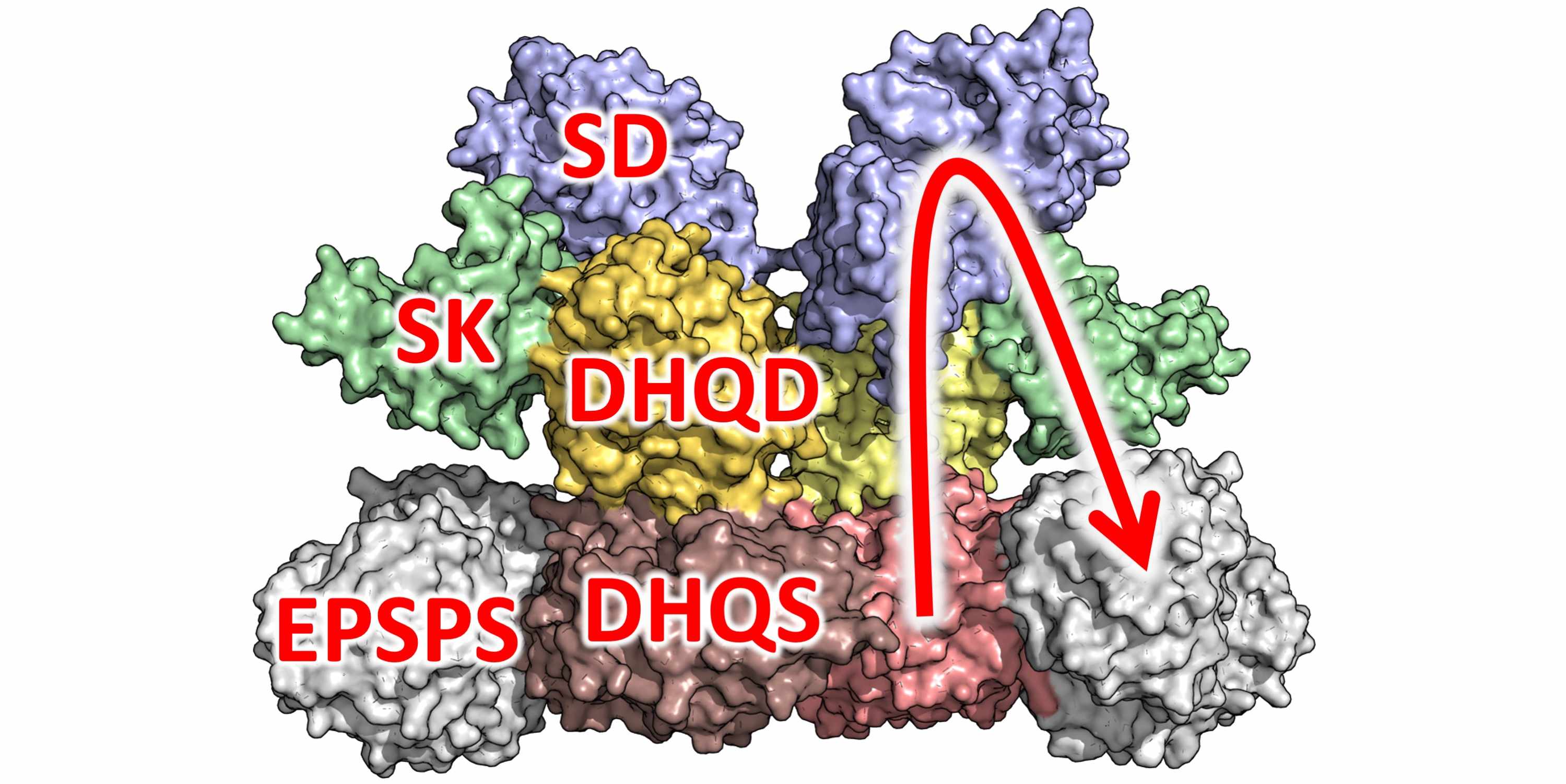 We were amazed by what the conformational sampling revealed: The architecture of AROM is tweaked such, that the domain assembly is maximally compact, while fully uncoordinated conformational transitions of all domains are possible without collisions. No hint for coordination. It is meticulously organized chaos confined to the max. This chaos may open a multitude of possibilities for the discovery of allosteric inhibitors, to lock AROM in unproductive conformations – but not its monofunctional counterparts in plants and bacteria.

And here we come to what we might not have explained in our study: We did uncover, that the catalytic throughput of the pathway is not enhanced by the close proximity of the enzymes within AROM. This is not exactly what we expected, and it tests our understanding of multifunctional metabolic machines, and also the concept of biotechnological pathway optimization via co-localization of enzymes. While there are several conceivable benefits for having the pentafunctional fusion, we feel that we might not have revealed every aspect of the AROM mystery: https://www.nature.com/articles/s41589-020-0587-9 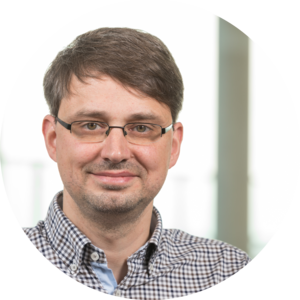 From cold fusion to pharmaceuticals

Curtis Berlinguette
Nature Research Chemistry Community
We use cookies to help improve your experience. By continuing to browse our website you are consenting to our use of cookies.
Learn more