Scientific and personal consequences of molecular shapeshifting
Amilra Prasanna de Silva
Chair of Organic Chemistry, School of Chemistry and Chemical Engineering, Queen's University Belfast
Follow
Like Be the first to like this
0

While many processes in biological cells can be understood in terms of molecular logic gates that process information sequentially and combinationally, the design and construction of such devices in the laboratory are unknown. Here the authors achieve this by the reversibly-controlled capture and re…

It’s not every day that major political events are mirrored in a test tube. A case of this appeared in: Daly, B., Moody, T. S., Huxley, A. J. M., Yao, C. Y., Schazmann, B., Alves-Areias, A., Malone, J. F., Gunaratne, H. Q. N., Nockemann, P. & de Silva, A. P. Molecular memory with downstream logic processing exemplified by switchable and self-indicating guest capture and release. Nat. Commun. 10, 49 (2019) [https://doi.org/10.1038/s41467-018-07902-7]. We were delighted when Nat. Commun. accepted to publish our realization that wall collapse or erection of a cyclophane macrocycle had several similarities with the Berlin wall. Important as that was, the paper had some more insights. The redox-driven capturing and release of a guest by the macrocycle had characteristics of a molecular memory which ran on chemical inputs and chemical outputs. The fluorescent indication of guest occupancy corresponded to serial integration of the memory unit with an INHIBIT logic gate. Controlled delivery of cargos from discrete molecular hosts had now entered the fold of molecular logic-based computation (MLBC)1,2. A 'Behind the paper' post on this is also available [https://chemistrycommunity.nature.com/channels/1465-behind-the-paper/posts/42873-the-fall-of-a-wall-inspires-small-scale-logic-integration-at-the-molecular-level].

Cargo delivery becoming an application area of MLBC was accompanied by several other entrants around the same time. Molecular information security systems were of increasing significance in our hackable world, as were Boolean computations happening in intracellular environments to monitor multiple players. Oligonucleotides and polypeptides were taking their place beside small molecules to perform logic operations of increasing complexity to take bioanalysis and synthetic biology forward. Additionally, the more established avenues of reconfiguring molecular logic or extending it beyond binary, while preserving utility, were gathering pace too. Attention was also being paid to the components of the gates themselves. We were encouraged to collect much of these new developments into a review, which came out last quarter3, to highlight the growing capability of molecules to handle intelligent functions. During this process, it was a delight to discover that over 1100 laboratories have contributed examples thus far (Figure 1).

The appearance of the Nat. Commun. paper also drove us to unveil our efforts in marrying enzymology and acid-base chemistry towards logical ends, which occurred earlier this year4. This publication in Chem. Commun. was in honour of Professor Eric Anslyn (University of Texas at Austin) who is also the world-leading research Professor in our School of Chemistry and Chemical Engineering at Queen’s University Belfast. In this work, we exploited the shift in pKa value that is seen in an amine when a neighbouring ester group is hydrolyzed. Since the hydrolysis agent is a robust hydrolase, Candida Antarctica Lipase B, which tolerates a wide variety of substrate structures, we were able to build-in several designer features into our molecular logic gate. The designer elements arose from fluorescent PET (photoinduced electron transfer) switching, whose generality we had established some time back5. In contrast, most of the excellent research in enzyme logic relies on natural substrates6. In the event, an AND gate driven by enzyme and H+ (and Na+) while displaying fluorescence output was demonstrated.

During the year that passed since the publication of the Nat. Commun. paper, the status of several co-authors changed for the better. Brian Daly married his lady love and took up College teaching. An academic life was also chosen by Chaoyi Yao when she took up a postdoctoral research position after defending her PhD Thesis. Peter Nockemann deservedly earned promotion to a Chair in our School. Although the rest of us co-authors continue largely as we were, the Nat. Commun. piece has given us a spring in our step. For instance, this was the spur which allowed me to approach the Leverhulme Trust to ask for assistance to extend the findings in the paper to more challenging problems in the logical delivery of molecular cargo. The Leverhulme Trust was kind to give support in the form of a postdoctoral research position which Chaoyi Yao now holds. The experience that she gains during this tenure will stand her in good stead as she grows in chemistry.

The Nat. Commun. paper has also spurred us to examine more complex variations on that wall erection/collapse concept in terms of different hosts, guests and logic arrays so that various chemical functions can be hidden or exposed at will. We should be able to look for answers to many questions concerning fundamentals and applications. For instance, what are the relative roles of geometry, symmetry, hydrophobicity, and electrostatics in the capturing state? Can the xylyldiammonium guests employed in the Nat. Commun. piece be replaced by surface-active species so that detergency might be controlled? Now we face many interesting new possibilities, just like west Berliners felt when the wall fell. 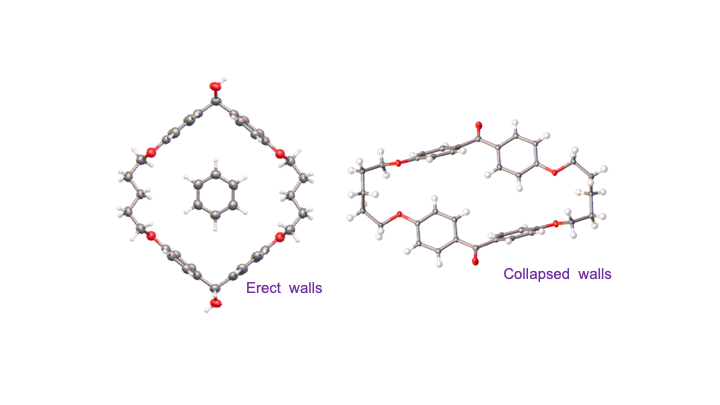